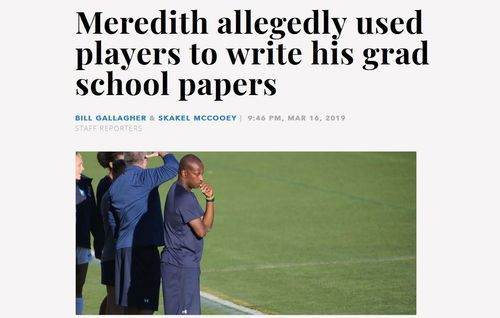 I’ve long felt that black guys can do pretty well career-wise out of learning sports with few blacks in them, like tennis or soccer (in the U.S.) and going into instructing. From the Yale Daily News:

As Yale continues to come to grips with the news that former head coach of the Women’s Soccer Team Rudy Meredith allegedly accepted bribes to help non-soccer-playing Yale applicants obtain “recruit” status in admissions, new allegations of misconduct have arisen regarding Meredith’s conduct outside of the scandal.

Two former Yale women’s soccer players — who requested anonymity given the sensitivity of the situation — told the News that while pursuing a master’s degree at Ohio University, Meredith allegedly pressured members of the Yale women’s soccer team to not only edit his academic papers but also to write significant parts of them. Meredith received his degree in recreation and sports science and coaching education in 2018, the same year he resigned from his position for undisclosed reasons. …

… Both sources told the News that after conducting the investigation, the athletics administration, headed at the time by former director of Athletics Tom Beckett, took no action against Meredith despite numerous complaints from team members that one of the sources said spanned many years. Beckett retired from his position as director in 2018. …

“I don’t know how it didn’t become more of an issue because to me it was a clear abuse of power,” one of the former players told the News.

According to the former player, Meredith used his position as head coach to encourage players to write his papers. Players apparently felt compelled to do so because they felt it would gain them better treatment.

Another former player told the news that Beckett — who held the position of athletic director for 23 years before his retirement in June 2018 — did not take any action to address the concerns that players had. According to the player, neither Beckett nor any other administrators reprimanded Meredith. She claimed that this alleged lack of action allowed Meredith’s “unprofessional behavior to continue and an entrenched and unbalanced power dynamic to persist in the program.” …

Before the admissions scandal — which tied Meredith to William “Rick” Singer’s college admission scam ring — Meredith had received criticism for his coaching.

“He didn’t put as much effort into his job as you would hope for from a head coach,” one of the former players said when Meredith resigned in November of last year. “He also struggled to motivate the team and connect with players in a way that would inspire us to play for him. We didn’t have practices that gave us the preparation necessary for games, in terms of fitness or scouting other teams or things in between. To put things in perspective, many players felt like they got worse over the four years playing at Yale.” …

Meredith solicited a bribe for $400,000 to admit one person as part of Singer’s college admission scam operation. Singer plead guilty last Tuesday to money laundering, racketeering, tax evasion and obstruction of justice for his role in a scheme that involved bribing coaches and exam proctors to get high school students into elite colleges. Meredith also attempted to get another applicant into Yale in exchange for $450,000 independent of Singer, which the FBI was listening in on.

He then received $4,000 from an FBI-controlled bank account, which gave the authorities evidence of wire fraud. He has worked for the FBI as a cooperating witness — designated as “CW-3” in court documents — since April 2018.

I could imagine Dave Chappelle in the Walter Matthau / Paul Newman role as the burned-out middle-aged guy who just can’t see anymore what the point is in soccer or girls’ sports or Yale or degrees or anything, really …