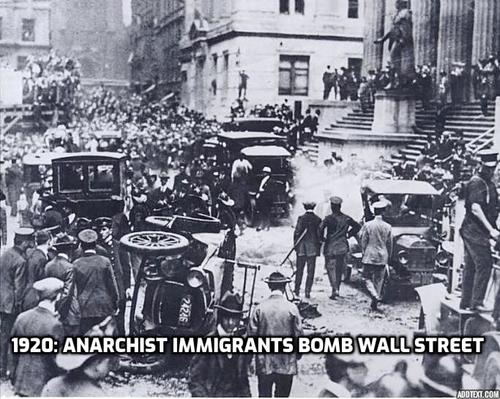 Re: A West Texas Reader Is Happy To Hear Rush Limbaugh Recite The History Of Immigration...Including The Pauses

From:  Delmar Jackson [Email him]

I hope I may be allowed to contradict Mr. Limbaugh on the reason we reduced immigration in the early 1920s.

"I mean, we actively shut down immigration as a policy for 40 plus years. The reason for it was that there had been so many people emigrate legally in the late 1800s through the early 1900s when Ellis Island was going bananas. The reason we did was to assimilate all of those people."[ Trump Threatens to Shut Down the Southern Border, RushLimbaugh.com, March 29, 2019]

Not really. Ellis Island and bananas and even assimilation had little to do with it. More importantly, "We" did not shut down immigration. Immigration was shut down by the elite in charge at the time. This elite was  made up of wealthy businessmen who became alarmed at the anarchist European immigrants that were coming. Almost no one remembers and the press never tells the story but it was the anarchist immigrants who assassinated McKinley in 1901 and later blew up buildings on Wall Street that killed dozens and injured many more that finally made the business elites and financiers of that time to act in favor of the interests of America. The elites quickly and successfully pushed for legislation to cut immigration and they got it done. The reduction was done out of fear of the radical anarchist Europeans coming to and transforming America.

The problem today is our elites of today, unlike those from that time, do not see themselves as Americans and are not bothered by the erasure and replacement of our people. This gets to the key point of immigration almost never spoken—until immigration becomes a problem for those people and organizations pushing it on us then we will never see a reduction in immigration and almost all conversations about it will be futile.

If immigration is truly our great national question, then how to make those causing it to suffer the consequences of their desires and actions is our one and only true answer to that question. They will never stop until something makes them or removes their influence in our society. Everything else is a distraction and a reduction in the limited amount of time we have left.

James Fulford writes: I covered a lot of the history of this in The (First) Thirty Years War For Immigration Reform, an article I wrote almost 20 years ago. It's amazing that the Wall Street bombing of 1920 could open the eyes of financiers to the downside of immigration, and the destruction of the Twin Towers, which many modern Wall Street people saw with their own eyes, did not.