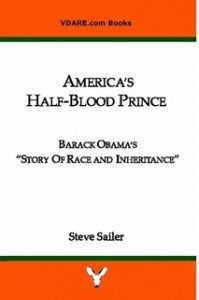 On the tomb of concert impresario Johann Peter Salomon in Westminster Abbey is the terse but entirely adequate epitaph: "He brought Haydn to England." I suspect that my own epitaph may well be: "He talked Steve Sailer into writing his first book."

That this brilliant if eccentric autodidact had to wait for me to suggest a book, and currently writes only for guerilla outlets like VDARE.COM, is devastating evidence of the political correctness that now paralyses American establishment publishing and the Mainstream Media, including its supposedly "conservative" fringes. That he is able to write for a living at all, and that we at VDARE.COM have been able to finance, publish and distribute America's Half-Blood Prince: Barack Obama's Story Of Race And Inheritance, is a heartening reminder of the internet revolution and the profound cultural and political consequences that it will bring.

Which can't happen a moment too soon.

I first became aware of Steve Sailer's work when we were both appearing in National Review. We are among a group of risk-taking writers who were badly hurt by the ageing William F. Buckley Jr.'s abrupt decision to fire John O'Sullivan as Editor in 1998 and to place the magazine in the hands of conventional Republican publicists allied with neoconservative ideologues—who can be best be described for this purpose as once and future liberals, briefly distracted by Cold War considerations.

This was naturally very interesting to our little group. But I think we can also fairly argue it had much wider implications. National Review promptly regressed to the media norm (see above). There was no longer any place to write about emerging issues like the science of human differences, mass immigration and affirmative action—which are exactly what Steve happens to be interested in (along with an astonishing polymathic array of other artistic, scientific and popular culture concerns).

And because these emerging issues were not written about, they were not sufficiently ventilated to be available to politicians.  Thus Steve has repeatedly argued in VDARE.COM that simple arithmetic indicates that, for the Republican Party, Bush strategist Karl Rove's much-touted "outreach" to minorities could never be as successful as "inreach" to its undermobilized white base. We refer to this as "the Sailer Strategy". In February 2008, as the Republican primaries came to their premature conclusion, Steve helpfully explained to the victorious McCain campaign how it could win the general election by rallying its base in opposition to a tangible, Willie Horton-type symbol of Obama's real racial views. (With remarkable prescience, he suggested Obama's pastor, Rev. Jeremiah Wright, who later nearly made himself into an election issue without McCain's help). In July, he pointed out that McCain could simply get on board the anti-affirmative action initiatives placed on state ballots by the heroic African-American conservative activist, Ward Connerly.

Steve also predicted that McCain would not take his advice, which he did not, with the result that Obama has been decisively ahead in the polls for 34 straight days as I write this in late October 2008.

But it all could have been different—if Steve had been more widely read.

For that matter, if Steve were more widely read, we would not now, in the fall of 2008, be facing massive reregulation and socialization in the financial sector. He has repeatedly demonstrated that the current economic slowdown is not matter of greed or market failure but is really a "Diversity Recession" , triggered by a "minority mortgage meltdown"—the result of bipartisan pressure on the mortgage lenders to lower standards in order to extend credit to politically favored, but financially risky, borrowers.

Of course, you will have difficulty finding this argument in the MainStream Media. I know—in my day job, I have been laboring in national financial journalism for some thirty years. In this case, however, I think the survival instinct of Wall Streeters, plus the perhaps-surprising professional objectivity of academic economists (they've long been skeptical of the economic benefit to native-born Americans of mass immigration, for example) will eventually cause Steve's analysis to prevail.

Steve is under the happy illusion that he is the house moderate at VDARE.COM. (We are a forum and publish will publish writers of any political persuasion who are concerned about immigration policy and what we call  the "National Question"—whether America can survive as a nation-state, the political expression of a particular people). Yet it is his writing, above all about race, that regularly gets us into the most trouble. For example, VDARE.COM was banned from the Republican booster site FreeRepublic.com, and anyone posting links to us purged for life, after one of Steve's earliest "Sailer Strategy" articles pointing out that there were far more white voters available to the Republican Party than minority voters.  Site proprietor Jim Robinson stupidly claimed in an email to me that this was "clearly racist". But in fact, of course, it's just a matter of math.

And, remember, FreeRepublic is an allegedly "conservative" site. Imagine the reaction of liberals and progressives. (Actually, you don't have to imagine it, their screeching is a constant in American public life).

The plain fact is that, fourteen years after the publication of Richard J. Herrnstein and Charles Murray's The Bell Curve, and two decades and more after the massive academic research on which it was so soundly based, honest public debate about race in America has actually become sharply more difficult. Steve and Charles Murray assure me that academic research continues.  But in journalism, regardless of how thoughtful and well researched, the issues that Steve Sailer raises cannot be discussed at all.

I think Steve himself is blissfully unaware of all this. He often reminds me of a gangly, goofy Labrador pup, bounding happily into the living room eager to show off the latest filthy bone he's dug up, utterly oblivious to the universal shock, horror and dogicidal glares.

And the truth is that Steve, in himself, is genuinely a moderate and temperate personality. He has that self-absorption not uncommon among introverted bookish intellectuals, which can be irritating, but otherwise he views his fellow man with amiable affability and, generally speaking, benevolence.

America's Half-Blood Prince is based on a close analysis of Barack Obama's 1995 memoir Dreams from My Father: A Story of Race and Inheritance

. It will be immediately obvious to reasonable readers that Steve actually quite likes Obama. In particular, Steve has real sympathy for the pain of the little boy longing for the father who had abandoned him—and, during much of his childhood, for the mother who had dumped him on his grandparents—and he has given careful and sensitive thought to what this means for Obama's allegiances and his beliefs.

Similarly, Steve's scholarly interest in racial differences in personality types has revealed that African Americans tend to be more outgoing, empathetic, articulate. This causes him to conclude that they would be good salesmen. My observation, as an immigrant, is that it wouldn't work because so many white Americans are physically afraid of blacks. But this nasty, possibly prejudiced, thought just doesn't seem to have occurred to Steve. Of course, he is 6'4" (although a self-confessed nerd).

Working with Steve as an editor is a special experience. Steve does not like editors. He thinks that answering their emails and phone calls encourages them, so he avoids it as much as possible. In particular, anything that could be construed as criticism causes him to retreat into a hurt silence, which can extend until the next deadline becomes a crisis. What might be called in conventional journalism an (ahem) "assignment" tends to be received with a grand Olympian coolth. Although I do intend to claim credit for suggesting this book to Steve, I am fully aware that he wrote it because he wanted to. If he hadn't, he wouldn't.

An M.B.A. with extensive marketing experience (which explains his quantitative bent, highly unusual in journalists), Steve turned to writing and left Obama's Chicago to move back to his own native California with his noble wife and children after a near-fatal bout with cancer, to which he makes a stoic reference in this book. As editor of VDARE.COM, I live in the East, a continent and four time zones away. This could have been a problem. But, after some experimentation, we evolved a system whereby Steve would autopilot a column in every weekend, untouched by human, or at least editorial, input.

It all works because Steve Sailer is a species of genius. Every Saturday morning, except when I get the terse email note "Out of gas—file tomorrow", I am confronted with a geyser of ideas, insights, and, not infrequently, statistical analysis, on an astonishing and unpredictable range of subjects. Because Steve writes in an overnight Dionystic creative frenzy, it sometimes materializes that his mind has darted off in some tangential direction and we actually have two columns, or at least a few additional blog posts. Editing twitch: I think I can see a couple in the present work. But it doesn't really matter in the context of Steve's incisiveness and courage.

In this book, Steve argues that Barack Obama has been presenting himself since 2004 as a "half-blood prince," an archetypal ambiguous figure in whom the various parts of a deeply-divided society can jointly invest their contradictory hopes. Such figures spring up regularly in conflicted polities. A classic example in my own experience: Pierre Trudeau, who appeared to have pulled off the same trick in reconciling English and French Canada in 1968. But, in such situations, someone is going to be disappointed. In Canada, Trudeau turned out to be an epiphenomenon of French Canadian nationalist debate.

In the U.S., Barack Obama turns out to be a man of the left who seeks to use government to redistribute wealth to his own race, but who has sought white support because he has found he is perceived as not really "black enough" to be a black leader—greatly to his distress. The evidence for this is Obama's own memoir, which is very honestly subtitled A Story of Race and Inheritance. Steve Sailer says: "This isn't a debate between Barack Obama and some guy named Steve. My book is, fundamentally, a debate between Barack Obama and his own autobiography. I'm just emceeing that debate."

Nevertheless, Steve guesses that an Obama first term will be cautious. He suggests that Obama's true radicalism will not emerge until after his re-election in 2012.

I disagree. I think the contradictions that Steve has identified in this book will turn any Obama Presidency into a four-year O.J. Simpson trial and that the consequent melt-down will compare to the Chernobyl of the Carter Presidency in its destructive partisan effects.

But regardless of which of us is right, the fact is that Obama's candidacy has achieved one thing at least: it provoked a Steve Sailer book.