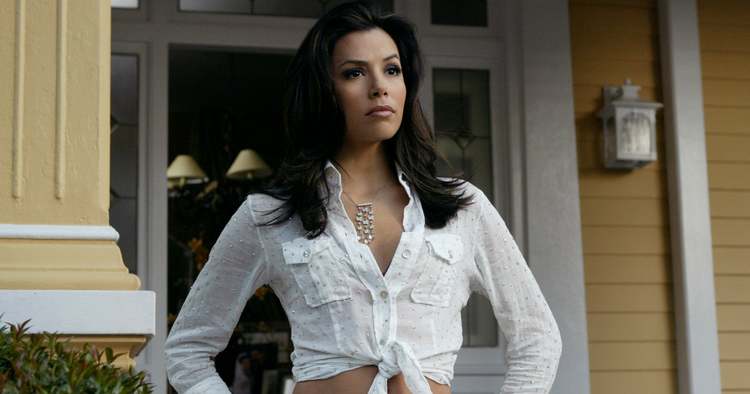 According to the Associated Press, during a civil ceremony a day earlier Longoria was chauffeured in a white stretch limo, wore "a way-above-the-knee pink Chanel dress" with striped black and white straps, changing into white dress for the Catholic ceremony that followed in the Saint-Germain-l'Auxerrois Church.

Conspicuously missing from the guest list, given Longoria's openly and often expressed admiration for her, was illegal alien activist Dolores Huerta.

Huerta's favorite chestnut about immigration is " We didn't cross the borders; the borders crossed us."

Longoria is one of those infuriating Hollywood bozos whose mostly worthless opinions get a forum because she is who she is…or, perhaps better said, who she thinks she is.

Longoria views herself as a crusader for illegal immigrants and their "rights."

Her dream is to star in a documentary about life for "struggling immigrants"—playing the Huerta role.

In a recent interview with the frivolous Maxim Magazine, Longoria outlined her delusional immigration views. If you are unfamiliar with Maxim, it advertises itself as a publication that specializes in articles about "girls, sex" and "hotties."  In 2006 for the second consecutive year, Maxim selected Longoria as its number one "hottie".

"We're documenting a day in the life of an immigrant worker, just to show how hard these people work—how they slave away just for us to have a salad at the Chateau Marmont.

"I spent a day out in the field, and it's horrendous. It's an exploitation of people who leave everything behind: their country, their family, their lives, their language, their religion. They leave it all behind to come here and make $5 a day. My hope is that the documentary will educate people about what's going on".

Large portions of Longoria's claims are completely false. The balance is wildly misleading.

I doubt if Longoria "spent a day" in the field. What would that have done to her hair? And if Longoria is so concerned about where her lettuce comes from, let her grow her own. Or don't patronize the Chateau Marmont.

The rest of Longoria's comments are utter nonsense. The overwhelming majority of farm workers do not leave " their country," " their family," " their language," and "their religion" behind.

In their hearts, the farm workers remain attached to Mexico. They rarely learn English, preferring instead to cling to their native language. Their families either come with them or join them at the earliest opportunity. And they remain staunchly Roman Catholic.

As for earning "$5 dollars a day," Longoria must be confusing U.S. wages with those in Mexico. While farm workers don't make much, they earn more than the peanut $5.00 daily salary paid in Mexico.

And there are many benefits Longoria didn't talk about: free medical care, education and citizenship for anchor babies. The entire package for farm workers—or what I refer to as " the deal"— is not so bad.

To prove what a nutcase she is, Longoria gave conflicting information in a November 2006 interview with the New Statesman. Here she says farm workers make $2 a day.

Longoria spoke of her association with the National Council of La Raza, with whom she set up a production company to work on her "political films."

About the NCLR, Longoria said:

"The mission of the NCLR is far more important than any personal recognition. The best thing I can do is ensure positive portrayals of Latinos in the media. We're in this big debate about the future of our immigration laws, and it is colored by the negative portrayals of Latinos on television. We're 14 percent of the population, but we make up 5 percent of the characters on TV." New Statesman - "I got Latinos to vote . . . but they voted religion" by Stephen Armstrong November 06 2006

However, Longoria contradicted herself completely when she concluded her New Statesman interview with this reference, complete with racist undertones, to her Desperate Housewives portrayal of the raunchy Gabrielle Solis:

"It's an amazing role because we're the richest people on the block and we're Latinos, which is really uncommon. And we have a white gardener . . ."

Read the entire interview here complete with Longoria's boastful claim that she influenced the "Latino voter."

In addition to her friendship with La Raza, Longoria also works with MALDEF, the Mexican American Legal Defense and Educational Fund, and wants to make a film about Aztecs. The actress is convinced that she was " an Aztec princess" in a previous life.

In the real world, which Longoria occasionally visits, she is a Texas-born graduate of Texas A&M University—Kingsville with a degree in kinesiology.

Longoria has experienced extreme good fortune in her life. In a hard sort of way, she's attractive. And Longoria came onto the scene when being Latino is hip. Her combination of looks and ethnic appeal propelled Longoria into her Desperate Housewives starring role.

But Longoria needs to get real…she's not a political force although she would argue to the contrary.

I'll end on an upbeat note. Neither Longoria's Huerta nor her Aztec projects are likely to get off the ground. They have been kicked around for a couple of years without going past the talking stage.

My advice to Longoria: relax and enjoy yourself. You've got it made, with your Saint-Tropez vacations, your $2 million contract to sell your wedding photos and your jet trips in and out of London's Heathrow Airport.

Don't look stupid by publicly offering your uninformed opinions about immigration. They might fly with your MALDEF pals but the average American is too aware to buy into your transparent, unfounded arguments.

Remember the old adage: "It's better to remain silent and to be thought a fool, than to open your mouth and remove all doubt."