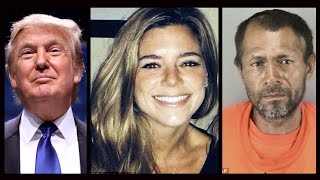 Democrat On The Triumph Of Trump: MSM May Kill The Messenger—But Not The Message

The overwhelming silent majority of American citizens who are immigration patriots have been wondering for years when someone would tell the truth and force the Main Stream Media to confront our post-1965 immigration disaster. But probably few of us expected it would be Donald Trump.

Trump is the subject of an increasingly hysterical hate campaign for daring to mention illegal immigrant crime. Journalists are calling Trump a “racist” instead of confronting his common-sense message—that a country which can’t control its borders is not a country.

This kind of reaction testifies to a kind of psychological problem with our Main Stream Media. “Shooting the messenger” is really a well-documented attempt to deny a feeling of powerlessness and escape reality:

Plutarch's Lives states: "The first messenger, that gave notice of Lucullus' coming was so far from pleasing Tigranes that, he had his head cut off for his pains; and no man dared to bring further information. Without any intelligence at all, Tigranes sat while war was already blazing around him, giving ear only to those who flattered him….”

Freud considered shooting the messenger a "marginal case of this kind of defense...of fending off what is distressing or unbearable," citing the example of "the famous lament of the Spanish Moors Ay de mi Alhama, which tells how King Boabdil received the news of the fall of his city of Alhama. He feels that this loss means the end of his rule. But he will not “let it be true....He threw the letters in the fire and killed the messenger.”

Freud added that "a further determinant of this behavior of the king was his need to combat a feeling of powerlessness. By burning the letters and having the messenger killed he was still trying to show his absolute power."

Of course, the accusation of racism is the ultimate trump (!) card for the MSM. So they aren’t just attacking Donald Trump, they are attacking him while refusing to even discuss what he actually said.

But the American people certainly heard it. Trump is now one of the top candidates in the race for the Republican nomination.

What is most remarkable, to me as a long-time Democrat, is how eager other major Republican candidates like Jeb Bush or Rick Perry are to condemn Trump, instead of seizing on the immigration issue even opportunistically. All it would take is for one of them to say: “Well, I don’t agree with absolutely everything Donald Trump says but his main points about controlling our borders and preventing the immigration of dangerous criminals are correct.” Yet only Rick Santorum (and to some degree Ted Cruz, although he remains in silly illegal-bad, legal-good mode) has done it. [Donald Trump’s comments on illegal immigrants divide 2016 GOP hopefuls, by Valerie Richardson. Washington Post, July 5, 2015].

I still don’t think Trump will be the Republican nominee, nor are we likely to see a Coulter-Trump ticket, as John Derbyshire suggested. Still, the immigration issue is now central to the campaign and it will be interesting (and amusing) to see everyone from Hillary Clinton to the clown car of Republican candidates desperately trying to avoid it.

Immigration is the elephant in the living room not just in the United States, but in every developed country.

Europe is practically under siege from a constant flow of “refugees,” most of whom are young males from Africa rather than helpless women and children.

The US is constantly being warned about possible terrorist attacks even as the federal government does nothing about the over 20 million illegal aliens roaming the country. Indeed, entire cities, so called “Sanctuary Cities,” have essentially seceded from federal law enforcement by refusing to enforce immigration laws. And this is enabled because the MSM automatically stigmatizes any resistance to this massive lawbreaking as “racism.”

Why? Powerful interests benefit from the status quo. Those who benefit from cheap labor or who want to import more Democratic voters, parishioners, or members of their preferred ethnic group are quite willing to put their own personal interests above the American national interest.

It takes someone with wealth and celebrity to break through the MSM blockade. Trump has done it. He has told the immigration story like it is. And though, under MSM pressure, businesses are breaking contracts with him and costing him millions of dollars, he has now won millions of passionate supporters.

Our country needs patriotic immigration reform. A start would be to make the already proven and successful E verify program permanent and mandatory, complete with sufficiently high penalties to get the attention of the greedy employers who would ignore it otherwise. If aliens cannot work in this country, they will leave. This will go a long way towards restoring immigration sanity.

And it would be an important step towards preserving the existence of our country and the rule of law, which our veterans fought for so bravely and which this Administration is giving away so recklessly.

Donald Trump has started this debate. He can advance it still further by talking about this simple policy suggestion. And Americans will continue to respond to his message as the Presidential campaign heats up.

Patriotic immigration reform isn’t about Left or Right. This Democrat is happy about Donald Trump’s impact on the race. Hopefully, it is just beginning.