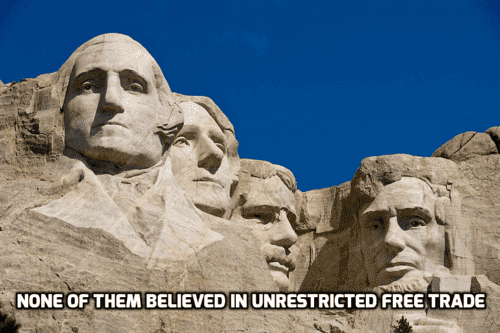 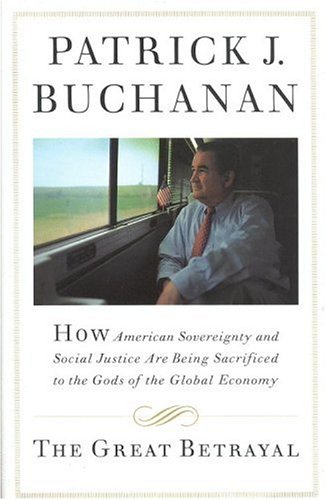 "Make America Great Again!" will, given the astonishing victory it produced for Donald Trump, be recorded among the most successful slogans in political history.

Yet it raises a question: How did America first become the world's greatest economic power?

In 1998, in The Great Betrayal: How American Sovereignty and Social Justice Are Being Sacrificed to the Gods of the Global Economy, this writer sought to explain.

However, as the blazing issue of that day was Monica Lewinsky and Bill Clinton, it was no easy task to steer interviewers around to the McKinley Tariff.

Free trade propaganda aside, what is the historical truth?

As our Revolution was about political independence, the first words and acts of our constitutional republic were about ensuring America's economic independence.

"A free people...should promote such manufactures as tend to render them independent on others for essentials, especially military supplies," said President Washington in his first message to Congress.

The first major bill passed by Congress was the Tariff Act of 1789.

In 1791, Treasury Secretary Alexander Hamilton wrote in his famous Report on Manufactures:

"The wealth ... independence, and security of a Country, appear to be materially connected with the prosperity of manufactures. Every nation ... ought to endeavor to possess within itself all the essentials of national supply. These compromise the means of subsistence, habitation, clothing, and defense."

During the War of 1812, British merchants lost their American markets. When peace came, flotillas of British ships arrived at U.S. ports to dump underpriced goods and to recapture the markets the Brits had lost.

Henry Clay and John Calhoun backed James Madison's Tariff of 1816, as did ex-free traders Jefferson and John Adams. It worked.

Financing "internal improvements" with tariffs on foreign goods would become known abroad as "The American System."

Said Daniel Webster, "Protection...of our own labor against the cheaper, ill-paid, half-fed, and pauper labor of Europe, is ... a duty which the country owes to its own citizens."

This is economic patriotism, a conservatism of the heart. Globalists, cosmopolites and one-worlders recoil at phrases like "America First."

Campaigning for Henry Clay, "The Father of the American System," in 1844, Abe Lincoln issued an impassioned plea, "Give us a protective tariff and we will have the greatest nation on earth."

Battling free trade in the Polk presidency, Congressman Lincoln said, "Abandonment of the protective policy by the American Government must result in the increase of both useless labor and idleness and ... must produce want and ruin among our people."

In our time, the abandonment of economic patriotism produced in Middle America what Lincoln predicted, and what got Trump elected.

From the Civil War to the 20th century, U.S. economic policy was grounded in the Morrill Tariffs, named for Vermont Congressman and Senator Justin Morrill who, as early as 1857, had declared: "I am for ruling America for the benefit, first, of Americans, and, for the 'rest of mankind' afterwards."

To Morrill, free trade was treason:

"Free trade abjures patriotism and boasts of cosmopolitanism. It regards the labor of our own people with no more favor than that of the barbarian on the Danube or the cooly on the Ganges."

William McKinley, the veteran of Antietam who gave his name to the McKinley Tariff, declared, four years before being elected president:

"Free trade results in our giving our money ... our manufactures and our markets to other nations. ... It will bring widespread discontent. It will revolutionize our values."

Substitute "Asian labor" for "European labor" and is this not a fair description of what free trade did to U.S. manufacturing these last 25 years? Some $12 trillion in trade deficits, arrested wages for our workers, six million manufacturing jobs lost, 55,000 factories and plants shut down.

McKinley's future Vice President Teddy Roosevelt agreed with him, "Thank God I am not a free trader."

What did the Protectionists produce?

Under Warren Harding, Cal Coolidge and the Fordney-McCumber Tariff, GDP growth from 1922 to 1927 hit 7 percent, an all-time record.

"Republicans who are shaky on protection are shaky all over."