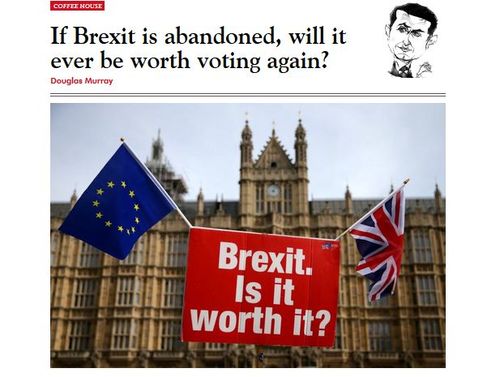 In 2016, the U.S. and Britain were both witness to peaceful revolutions.

The British voted 52-48 to sever ties to the European Union, restore their full sovereignty, declare independence and go their own way in the world. Trade and immigration policy would henceforth be decided by a parliament elected by the people, not by bureaucrats in Brussels.

"Brexit" it was called. And British defiance stunned global elites.

Two and a half years later, Britain is still inside the EU, and no one seems to know when or whether the divorce will take place—a victory of London and European elites over the expressed will of the British people.

Appalled by the Brexit vote, these elites played a waiting game, broadcasting warnings of what could happen, to panic the British public into reconsidering and reversing its democratic decision.

Establishments have agendas they do not regard as subject to electoral repudiation or repeal. Defeated, they use their non-electoral powers to prevent unwanted policies from ever being implemented.

In 2016, Donald J. Trump was elected president when a spirit of rebellion against America's failed elites roiled both parties. Both the Trump campaign and the Ted Cruz campaign, which ran second in the Republican race, offered anti-establishment ideas. So, too, did the Bernie Sanders campaign in the Democratic primaries.

Trump's defining agenda was basically this:

Halfway through this presidential term, where are we?

Part of the U.S. government has been shut down for a month. The wall has not been built and may never be. President Trump's decision to pull 2,000 U.S. troops out of Syria has met massive resistance from our foreign policy establishment. Trump is being pushed to confront Russia from the Baltic to the Black Sea and to trash the intermediate-range nuclear missile treaty that Ronald Reagan negotiated with Mikhail Gorbachev.

And we are being pushed toward a new Mideast war with Iran.

This was the establishment's agenda, not Trump's.

We have lately learned that after Trump fired FBI Director James Comey, a cabal inside the FBI initiated a counterintelligence investigation to discover if Trump was a conscious agent of a Kremlin conspiracy.

Who made this call? Who approved it? Did the FBI discover that Trump is a patriot, or another Alger Hiss? We have not been told by the FBI after two years of investigation. Why not?

We do know that the dirt-diving arm of the Clinton campaign, Fusion GPS, hired a British former spy with KGB connections to cook up a "dirty dossier" that was used to persuade the secret FISA court to approve the surveillance of the Trump campaign.

Yet there seems a massive media disinterest in a conspiracy that might portray Trump as the victim of dirty campaign tricks.

Which brings us back to the larger question: While populists have won elections and carried out peaceful revolutions, often the policies for which they have successfully worked are never implemented.

In the 1975 book "Conservative Votes, Liberal Victories: Why the Right Has Failed," this writer sought to explore and explain the forces that so often deny the right the policy fruits of its political victories.

Foremost among these was "the New Journalism."

"The essence of press power lies in the authority to select, elevate and promote one set of ideas, issues, and personalities and to ignore others," this writer wrote. "The press determines what 'people will talk and think about' because of the monopoly it holds over the news and information flowing out of Washington."

Among the reasons for Trump's political success, such as it is, is that today's conservative media did not exist back then, nor did the new social media that he has mastered so well.

What is taking place in the West today might be described as a struggle between the capital and the country it rules. England voted to leave the EU; London voted to remain.

In the last analysis, Kennedy was surely right. People who see the policies they have voted for rejected again and again, by the very elites they defeated, will inevitably turn to other means to preserve what they have.

The "yellow vest" protests in Paris show us that.