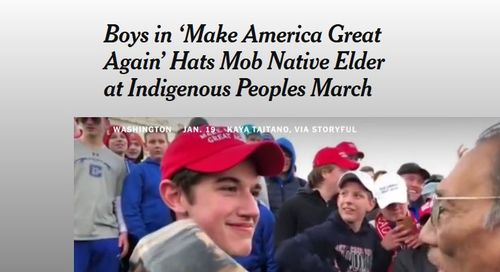 Which Kind Of White Boys Does The NYT Hate Most: Protestants Or Catholics?

They were Catholic high school students who came to Washington on a field trip to rally at the March for Life.

He was a Native American veteran of the Vietnam War who was there to raise awareness at the Indigenous Peoples March.

They intersected on Friday in an unsettling encounter outside the Lincoln Memorial — a throng of cheering and jeering high school boys, predominantly white and wearing “Make America Great Again” gear, surrounding a Native American elder.

The episode was being investigated and the students could face punishment, up to and including expulsion, their school said in a statement on Saturday afternoon.

In video footage that was shared widely on social media, one boy, wearing the red hat that has become a signature of President Trump, stood directly in front of the elder, who stared impassively ahead while playing a ceremonial drum.

So a child stood his ground while an adult banged a drum in his face?

Probably some second cousins of Brett Kavanaugh went there, if you know what I mean.

The school had advertised that students would attend this year’s March for Life Rally, which took place in Washington on Friday. In a letter to parents, the trip was described as an opportunity for students to live out their faith and demonstrate in support of all life “born and unborn.”

In a statement, the Diocese of Covington and Covington Catholic High School condemned the behavior by the students and extended their “deepest apologies” to the elder, as well as to Native Americans in general. …

Of course, that wasn’t exactly the way it happened.

“What is not being shown on the video is that the same youth and a few others became emotional because of the power, resilience and love we inherently carry in our DNA,” another organizer, Nathalie Farfan, said.

See, the aggressive drum-banging adult has good DNA while the self-restrained child has evil DNA. That’s all you need to know these days.

Update: This kind of thing seems to happen to this “Native Elder” a lot. From Fox2Detroit.com in 2015:

An Ypsilanti man says he was trying to teach a few students dressed in American Indian theme party about respecting Native Americans.

Not long afterward, Nathan Phillips said that an interaction with party-goers and students turned ugly.
Nathan Phillips says he was out for a noon walk on a Saturday in mid-April. He walked by a home where he saw Eastern Michigan University students dressed as Native Americans.

“They had little feathers on, I was just going to walk by,” Phillips said. “A group of them said ‘Come on over, come here.'”

He says he walked over to the fence and saw roughly 30 to 40 students involved in a theme party.

“They had their face painted,” Phillips said. “I said what the heck is going on here. ‘Oh we are honoring you.’ I said no you are not honoring me.”

It was a statement he says they took offense to.

“Then started whooping and hollering,” he said. “I said that wasn’t honoring, that was racist. Then at that time, it really got ugly.”

Phillips says he was bombarded with racial slurs.

“(They said) ‘Go back to the reservation, you blank indian,'” he said.

One student, he says, threw a beer can at him.

Nathan Phillips appears to surface in the media quite regularly. For example, here’s a video by some Scientologist called Skrillex that has 380 million views. It appears to star Phillips in a completely non-cliched role as the wise tribal elder. Warning: this music by Skrillex sounds as awful as you’d expect from how the name “Skrillex” sounds. It sounds like the B side of a 1979 Clash single. Didn’t musical styles used to change?

Phillips should do a Spanish-language public service announcement in which he cries at all the littering done by Hispanics.

And is he really a Vietnam Vet? When was he born? Wasn’t he born in 1955, which means he didn’t turn 18 until 1973, and the U.S. got out of Vietnam in the winter of 1973, when he’d still be at best in boot camp. (On the other hand, lots of guys are said to have joined the military before their 18th birthday.

Granted, the concept of a “Vietnam Era Vet” can be pretty expansive. My cousin was in the military in the late 1960s, but instead of being sent to Vietnam, he served as a typist in a NATO headquarters in Venice, Italy. He commuted to the office each day in a gondola. But he’s still a Vietnam Era Vet.