Trump WAS Winning On Illegal Immigration. He Still Could

The Daily Caller recently (9/14) published my commentary on the August job numbers. Evidence of how much Trump has begun to alienate his base: There’s intense resistance to good news, with the result that there is an appetite for reports that illegal immigrations is rebounding e.g. Here’s what’s happening to illegal alien crossings after a historic decrease, by Carlos Garcia, The Blaze.com, September 15, 2017. As I argue below, this is a statistical misunderstanding. Illegal immigration appears to have bottomed out, but it is still far below recent levels (SEE CHART ABOVE).

Imagine what would happen if the GOP actually passed legislation.

Trump Has Reduced Immigration Without Lifting A Finger 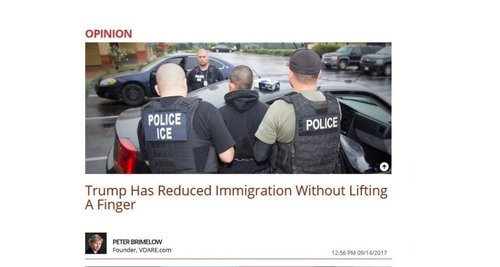 Get used to it: Donald Trump spent his life on building sites. Chaos, messiness, noise and frenzied rushing around seem normal to him, although they’re driving America’s political class absolutely nuts. On immigration policy, this means nobody (probably including Trump) really knows what is going to happen with the DACA Amnesty, aimed at young adult illegal aliens allegedly brought here as children, or with the 2018 refugee quota, which the Administration must announce this month.  But we do now know, looking at government data, what’s quietly happening with immigrants: they’re leaving. Even the widely reported summer rebound in illegal aliens crossing the southern border is based on a statistical misunderstanding.

Back in April, I reported that the monthly Bureau of Labor Statistics Household Survey report showed year-over-year growth in the immigrant population (legal and illegal, the government Doesn’t Ask) had completely stalled since Trump’s election. This was particularly significant because, during President Obama’s last years, it had been running well in excess of the million legal immigrants expected annually. Which had meant an unreported illegal alien surge was under way—quite probably because the Democrats were blatantly offering Amnesty.

Additionally, immigrant displacement of American workers had reversed. Here I rely on the work of economic consultant Edwin S. Rubenstein of ESR Research, previously of the Hudson Institute and National Review. He has been tracking this effect for years. When Barack Obama took office, about 15% of persons working in the U.S. were immigrants. In Obama’s last full month, December 2016, the immigrant share had risen to just over 17%. This suggests that Obama-era immigration may have pushed as many as 3.16 million native-born Americans onto the unemployment rolls.

But during Trump’s first two full months, immigrant employment fell by 0.26%, while native-born American employment rose by 0.78%. Of course, this is far from enough to reverse the erosion of the Obama years (let alone the Bush years). But it was a start.

Call it the “Trump Effect.” 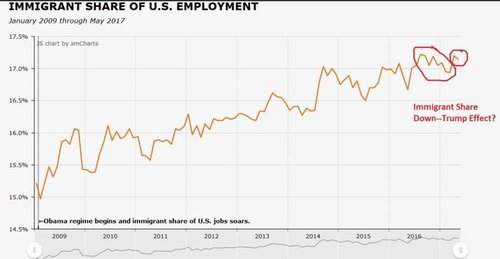 It wasn’t altogether clear why this Trump Effect was happening, since the GOP-controlled Congress had (typically) passed no legislation and Trump’s various executive actions were being frustrated by Leftist judges (although the Supreme Court has generally vindicated him). I argued it was an example of what economists call “jawboning”—producing economic effects through informal pressure.

Ironically, it wasn’t even Trump’s jawbone, particularly. It was the Democrats and the Main Stream Media (to the extent that they can be distinguished). Their hysteria about Trump apparently convinced illegal aliens in the U.S. (and maybe some legal immigrants) that it was time to leave.

Of course, it was always possible that this Trump Effect could reverse, or even that it was statistical “noise.” And the subsequent months did see some gyrations. But the data for August, reported on September 1, finally showed that the working age immigrant population in the U.S. had contracted, by some 138,000 or 0.33%.

This is the first contraction in the foreign-born population since the nadir of the Great Recession in 2009, and before that for many years. It’s an extraordinary development in a moderately strong economy—in the modern age of lax enforcement, economic expansion has usually meant more immigration.

And it suggests that American workers may finally be able to demand higher wages. (More details here).

Paradoxically, the immigrant share of American employment, which had stalled, has finally struggled back to 17.27%, very slightly above its late Obama Era high. Perhaps the strong economy is luring immigrants already in the U.S. into the labor force—they can move more easily because they don’t have family ties and houses to sell and they will accept lower wages—and, as a result, native-born Americans are still being displaced. 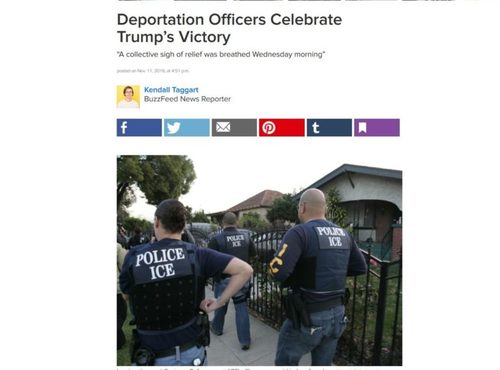 But obviously this displacement cannot continue if the immigrant population continues to fall.

The Trump Administration—specifically, Attorney General Jeff Sessions—seems to have achieved this result simply by enforcing laws already on the books. For example, law enforcement officers have reported an immediate dramatic change in the willingness of ICE (Immigration and Customs Enforcement) to pick up illegal aliens arrested for criminal offenses.

Of course, all this could be reversed, for example if the Trump Administration actually does cave on the DACA Amnesty. Or it could be confirmed, for example if Trump actually gets behind the RAISE Act proposed by Senators Cotton and Perdue—which, ironically, finally tries to implement the 50% cut in legal immigration recommended by the bipartisan Jordan Commission over 20 years ago.

But meanwhile Trump, almost unnoticed, has achieved one of those much-touted “wins.”