In the months immediately after Donald Trump’s election, immigrant displacement of American workers and growth of the foreign-born workforce (including illegals) seemed to be reversing so consistently that we were surprised when April’s job data suddenly undid all the gains. We wondered if it was statistical noise or a seasonal artifact that would soon reverse. But July’s job report seemed finally to confirm that the Trump Effect is real. And the August jobs report, released before the Labor Day weekend on Friday, September 1, offers the most dramatic evidence yet.

There were 138,000 fewer working-age immigrants in the country in August 2017 than in August 2016, according to the Labor Department—a decline of 0.33%. Year-over-year declines of this magnitude last occurred in 2009, the nadir of the Great Recession. And even in that dreadful year, the August reading showed an increase in foreign-born population from the same month of the prior year.

Any decline in the foreign-born working age population during a period of fairly robust employment growth is an extraordinary development. Job growth has always attracted illegal border crossers—at least, before Trump.

Seasonal factors are always at work, so it is particularly heartening to juxtapose August 2017’s year-over-year decline in foreign-born population to the massive 1.478 million year-over-year increase in August 2016, when an unreported (by the Main Stream Media) late Obama Era illegal alien surge was clearly underway.

The bad news: the two employment surveys reached very different conclusions. The widely cited Payroll Survey figure reported that 156,000 jobs were created in the month of August, while the Household Survey, which alone disaggregates total employment into immigrant and native-born components, found a 74,000 job loss. This meant that in August:

Our August takeaway: Year-over-year population data indicate that immigrants are now leaving the country. But, paradoxically, the monthly employment data for August imply that a strong economy is luring immigrants already here into the labor force—probably because of their superior mobility and willingness to accept lower wages—and, as a result, native-born Americans are still being displaced.

So while we have not yet decisively reversed the long-term Obama-Era trend, the first seven months of Trump has moved us much closer to that goal.

The immigrant share of employment in August (17.27%) was 0.22 percentage points above the share in December. This implies that resistance to Trump’s immigration agenda may have put some 33,760 native-born Americans out of work.

In contrast, at its peak in April 2017 the mere threat of a Trump immigration crackdown appeared, by our estimates, to have put 168,000 native-born American workers back to work. This was actually quite plausible, given the early hysteria about Trump in the MSM. Some immigrants, legal and illegal, may have decided to leave. Others, above all illegals, may have decided not to come after all. 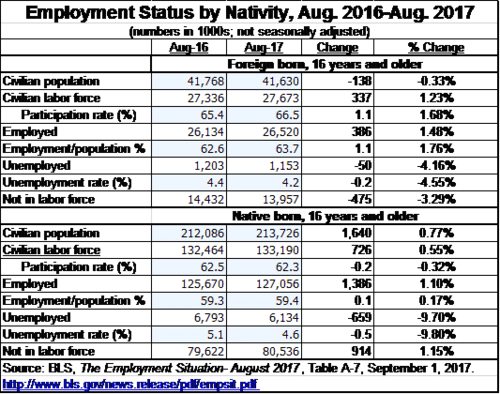 But without interior enforcement, and above all a reduction in legal immigration, it will take time to benefit American workers.