Allan Wall: Our Trip To Mexico And What I Saw At The Border Station—Mexicans Are Going Home

My family and I recently returned from our summer trip to Mexico. It lasted a couple of weeks and went smoothly. We were able to visit relatives and do some other things.

We got the car worked on cheaper than it would have cost in the United States, given that wages for labor are so much lower there than in the U.S. That’s why employers like to hire illegal Mexicans, isn’t it?

Trump is still persona non grata in Mexico, but really, life goes on. I did see an anti-Trump t-shirt for sale, though I didn’t see anybody wearing one.

My son David, who turned 18 during the trip, purchased a Trump mask for sale in a marketplace. (David is an avid Trumpster himself and was even able to attend the inauguration, see here, here and here).

We entered and exited Mexico at the same border immigration station, where I have to get a visitor’s permit for myself and a permit for the car.

This border station has provided evidence of how Mexico is dealing with the return of deported or self-deported Mexicans. In fact, this has been been going on since before Trump was president, as I’ve reported previously.

A year ago (2016) I noticed that the border immigration station had been partially remodeled. It included a section called Repatriaciones [Repatriations]. It didn’t look like it was in use yet, but the sign indicated that various benefits were available for Mexicans returning to Mexico. (See my article about it here.) This was when Trump was still a candidate.

Our next visit to Mexico was at Christmastime, after Trump had been elected but before he had taken office. This time, the repatriations desk was actually in business and was taking “customers.” It was then called Repatriación Humana, which means “humane repatriation”. (See article here). 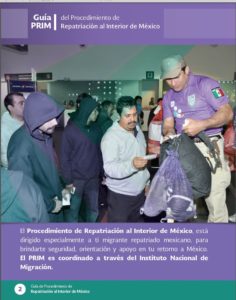 On this latest visit, July of 2017, from which we just returned, we passed through the very same immigration station, entering July 2nd and departing July 18th.

The Repatriación Humana section was in operation, and a big sign read

Before leaving this office, demand your signed Constancia de Repatriación [official repatriation document] and your contact card from the INM [Mexican immigration bureaucracy] personnel. With them [the documents] you can obtain particular benefits upon arriving to your state.”

On July 18th we departed Mexico through the same immigration station. I saw over twenty persons in the Repatriaciones section, some of them with food they had apparently been issued. These persons appear to have been deportees (or self-deportees) who were being received by the Mexican government.

Such observations (along with news reports) show me that the Mexican government is dealing with the deportees. And note, this has been going on since before Trump was elected. Mexico’s leaders took Trump seriously.

So the Trump administration needs to keep the pressure up and continue the deportations. Mexico is dealing with them, and both external and internal pressure forces the Mexican government to continue doing so.

In the long run it’s better for both countries.