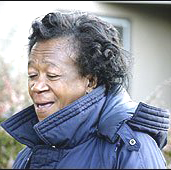 Is this the kind of CHANGE the American people voted for? I don't think so.

Keep in mind that Obama's aunt is not merely an illegal alien, but an absconder, fleeing from an existing deportation order.

Equal justice under the law has not been the operative mode: Fugitive Obama aunt apparent target in go-easy directive [Tucson News 4, Jan 26, 2009].

WASHINGTON (AP) - A rule quietly imposed by the Bush administration right before Barack Obama was elected president remains in place.

It requires immigration agents to get approval from higher-ups before arresting fugitives in cases where the arrest might generate what Homeland Security terms "negative media or congressional interest."

The department's directive was issued October 31st, hours before The Associated Press disclosed the illegal status of Obama's aunt from Kenya. Zeituni Onyango (zay-TUH'-nee awn-YAHN'-goh), was instructed to leave the country four years ago but never left. She spent time in Boston and is now reportedly living in Cleveland.

She's fighting deportation and was in Washington for Obama's inauguration last week.

The White House says it will not get involved, and Onyango's case will be handled like any other.

The White House won't have to be involved; the message has been sent to law enforcement to back off. Many of the absconders are violent criminals — killers and rapists and gangsters — so the order may endanger Americans by attaching strings to the arrest of the worst of the worst, apparently to protect the new President's lawbreaking Kenyan relative. That's the way it sounds at least, although it's unclear how major a stand-down has occurred: one report noted that 69 people were arrested by ICE in Dallas earlier this month.

And that's not all: Auntie Ripoff gets another spin at the wheel (even though her previous request for asylum was denied): Obama's aunt has immigration hearing in April.