Last week’s damaging Senate Judiciary Committee testimony (see here and here) suggests that legislation expanding H-1B program is going nowhere (which may be why the Regime is threatening one of its imperial decrees for guest workers: Indian IT Industry Gets a Boost As Obama Decides To Ease L-1B Visa Norms, by Mohul Gosh, Trak.in, March 24, 2015. But all the evidence you really need is in our chart above. (Mouseover for the underlying data).

When a commodity is in short supply its price rises, thereby increasing supply, reducing demand, and eventually eliminating the shortage. If STEM workers were in short supply, their earnings would be increasing rapidly. Instead, the data show long-term stagnation

Average real earnings for all STEM workers rose by a mere 0.4% per annum over the 2000 to 2012 period, according to a Center for Immigration Studies report published in 2014. No STEM category escaped stagnation: average annual income growth ranged from a low of 0.2% per annum for Science workers to a high of 0.6% per annum for Engineers.

With immigrants filling an increasing share of STEM employment, many readers might conclude that foreign-born workers are needed to meet the increased demand for STEM workers. That would be the wrong. If anything, there is a glut of STEM workers—a glut exacerbated by the very influx of immigrants STEM employers clamor for.

The overwhelming statistical evidence against the STEM shortage shouters has convinced even normally pro-immigration groups. Recent reports by the Economic Policy Institute (EPI), the RAND Corporation, the Urban Institute, and the National Research Council find no evidence that STEM workers are in short supply.

The RAND study, published in 2004, looked backward in time and found, “Despite recurring concerns about potential shortages of STEM personnel . . . we did not find evidence that such shortages have existed at least since 1990, nor that they are on the horizon.” 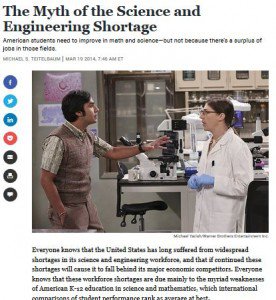 Harvard demographer Michael Teitelbaum [Email him]summarized the literature on STEM in an article entitled The Science and Engineering Shortage Is a Myth in the March 2014 Atlantic: No one has been able to find any evidence indicating current widespread labor market shortages or hiring difficulties in science and engineering occupations that require bachelor’s degrees or higher,” he points out.

Teitelbaum is one of the nation’s leading experts on STEM employment, and former vice president of the Sloan Foundation, a philanthropic institution essentially devoted to STEM education.

Even PBS (PBS!) weighed in with an opinion piece based on the EPI study, entitled, “The Bogus High-Tech Worker Shortage: How Guest Workers Lower U.S. Wages.”

The education-centric story of our problems runs like this: We live in a period of unprecedented technological change, and too many American workers lack the skills to cope with that change. This “skills gap” is holding back growth, because businesses can’t find the workers they need. It also feeds inequality, as wages soar for workers with the right skills but stagnate or decline for the less educated. So what we need is more and better education.

My guess is that this sounds familiar — it’s what you hear from the talking heads on Sunday morning TV, in opinion articles from business leaders like Jamie Dimon of JPMorgan Chase, in “framing papers” from the Brookings Institution’s centrist Hamilton Project. It’s repeated so widely that many people probably assume it’s unquestionably true. But it isn’t….

Furthermore, there’s no evidence that a skills gap is holding back employment. After all, if businesses were desperate for workers with certain skills, they would presumably be offering premium wages to attract such workers.

So where are these fortunate professions? You can find some examples here and there. Interestingly, some of the biggest recent wage gains are for skilled manual labor — sewing machine operators, boilermakers — as some manufacturing production moves back to America. But the notion that highly skilled workers are generally in demand is just false….

As for wages and salaries, never mind college degrees — all the big gains are going to a tiny group of individuals holding strategic positions in corporate suites or astride the crossroads of finance. Rising inequality isn’t about who has the knowledge; it’s about who has the power…

Krugman is right. Powerful individuals over-hype the need for skilled workers to justify importing cheaper ones from abroad, thereby keeping their incomes and profits high.

Note also that non-STEM workers with a bachelor's degree or higher did even worse—their earnings actually declined (by 0.2% a year) between 2000 and 2012, versus 0.4% a year average increase for STEM.  The difference, of course, is that STEM employers are actively lobbying for more foreign-born workers.

They would love to see STEM wages fall also.

But as Senator Jeff Sessions commented at the Judiciary Committee hearing: “We have no obligation to yield the lust of Big Business.”