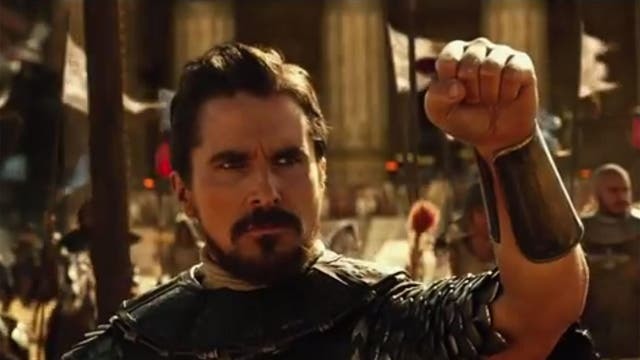 Rupert Murdoch Defends Moses Movie Casting: “Since When Are Egyptians Not White?”

Rupert Murdoch took to Twitter tonight to defend 20th Century Fox’s new movie “Exodus” that casts Christian Bale as Moses, and a variety of white actors as Egyptians. There’s been scuffle on Twitter ever since Murdoch made his observations. When I met Los Angeles mayor Tom Bradley in mid-1981, I was struck by how much he reminded me of Anwar Sadat (left) whose picture was omnipresent in the news then, just before Sadat’s assassination.

Presumably, blacks aren’t up in arms about black actors not being cast as Hebrews, but instead are angry about blacks not being cast as Egyptian pharaohs, even though they are supposed to be the bad guys in the movie. Joel Edgerton, the Australian actor who played arch-hate figure Tom Buchanan in the recent Great Gatsby, plays the Yul Brynner role of Ramses.

By the way, over the decades there has been a lot of joking about gentile Charlton Heston playing Moses in Cecil B. DeMille’s The Ten Commandments. Perhaps having a guy named Christian play Moses is the real problem here. (Bale’s English on both sides — oddly enough, Gloria Steinem was his stepmother for a few years, but Christian’s mother was David Bale’s previous wife.)

In general, there aren’t a lot of fully (by ancestry) Jewish leading men in Hollywood. For example, Scorsese casting the gentile Leonardo DiCaprio as The Wolf of Wall Street neutered a lot of the point of the memoir the movie is based upon, but DiCaprio is a huge star and definitely didn’t phone this performance in.

Fully Jewish leading men include Paul Rudd and Joseph Gordon-Levitt (although everybody thinks, to his irritation, that his grandmother must have had a little Asian in her). Both, like DiCaprio, are in the contemporary boyish mode, while Bale (even though he was a child star of sorts) is more grown up for his age, which seems appropriate for Moses.

In a decade, Andrew Garfield (currently playing Spider-Man) will likely be a fine all-around choice for a leading man, but he’s too young to play Moses at present.