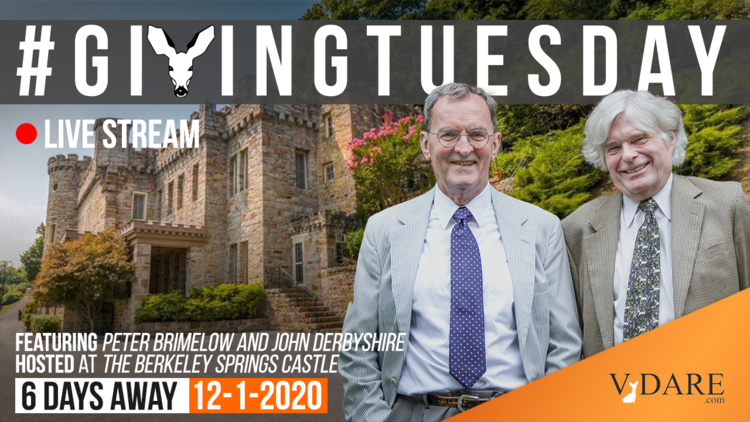 20 years ago, when VDARE.com Editor Peter Brimelow launched this site, he named it after Virginia Dare, the first English child born in the New World, in 1587.

Peter recognized that Virginia Dare’s story, once a fixture of every American’s grade school education, had fallen out of fashion, edged out by the multicultural agenda.

Today, another story from America’s heritage that VDARE.com is determined to keep in fashion is particularly relevant: This year marked the 400th Anniversary of the Mayflower Compact—signed November 21, 1620.

The Mayflower Pilgrims’ suffering and sacrifice are critical elements of their story, but it is their dissent in the face of powerful persecution, their survival against the odds– indeed the fact that they flourished and did so with orderly, voluntary self-government—that inspires patriotic Americans today.

The Pilgrims had enormous impact on the world. Among their estimated 35 million descendants are a dozen Presidents including both Adamses, both Roosevelts and both Bushes, along with many other notables as diverse as Humphrey Bogart, Marilyn Monroe, Amelia Earhart, Astronaut Alan Shepard, Warren Buffett and Winston Churchill.

The Mayflower Compact, signed before they got off the ship at Plymouth Rock, was the first exercise in voluntary self-government from and by the consent of the governed, in the English-speaking world, not to mention the New World, and it inspired the Framers of the Constitution. In 1802, President John Quincy Adams said that it was “the only instance in human history of that positive, original, social compact.”

The Mayflower Compact was not an experiment.  Rather, it was a group of Englishmen doing things in the ways that had become ingrained in their culture over a thousand years of development (even before Magna Carta).  The United States of America is not an experiment.  Rather, the Constitution which formed the nation was an expression of the same culture that shaped the Mayflower Compact and the government that grew from it.

Without the Mayflower Pilgrims and their courage to dissent it is fair to say, the Historic American Nation would be unrecognizable—perhaps even non-existent.

Now, 400 years later, we Americans must again choose self-government, as shaped by that same heritage. We must rediscover what it means to choose America First policies domestically and abroad. We must choose again, as the Pilgrims did, to join together not just to survive, but also to flourish and grow in the context of the nation and culture that have provided freedom and plenty on a historically unimaginable scale to those who have embraced it, and provided it generously to millions more around the world.

VDARE.com exists to guide, promote and support that American cultural reawakening.  It is only website dedicated solely to patriotic immigration reform and the National Question. VDARE.com is the voice of the Historic American Nation. We publish multiple posts a day covering US immigration policy and a broad spectrum of related Politically Incorrect topics.

VDARE.com has also striven to bring patriots together in conferences to discuss the urgent ideas of our time and to develop personal bonds.  However, Cancel Culture in the form of Antifa harassment caused ten hotels in a row over a three-year period to terminate contracts with us and refuse our business after planning had already begun.

To defy the Cancelers (dare we call them Haters?) and to free and amplify patriotic voices in America, VDARE took the bold step of purchasing our own venue. In Spring of 2020, Berkeley Springs Castle in Berkeley Springs, West Virginia became a new center for the defense of the Historic American Nation.   Renovations are underway.  By summer of 2021 VDARE will throw the gates open and welcome our many readers and supporters to parties, dinners, meeting and conferences in our own, un-cancelable, secure and private space.

The Berkeley Springs Castle is now the cornerstone of an enduring institution dedicated to the defense and advancement of America—not an “idea” or “experiment,” but a nation resting on our inherited culture, our people and our home.

One of the great political challenges of our time is the vacuum where America First institutions and leaders should be. President Trump accomplished many positive things on immigration during these past few years, but few of them are permanent. Above all, there is no enduring legislated check on mass immigration. Escalating unofficial but effective censorship via “cancel culture” and digital “de-platforming” strangles grassroots communications and blights patriotic efforts. In this new regime of political terror, outspoken patriots know they expose their reputations and livelihoods to smear campaigns and mob action.

VDARE.com freely accepts that risk and more.  We take the fight back to those who would destroy America.  We are led by individuals with real names and faces. We move forward in the spirit of the Pilgrims who took great risks for righteous dissent.  We defend and advance the cause of our home our culture and our people—no matter what the costs. For 20 years, VDARE has stood strong for patriotic immigration reform, and the Historic American Nation. We are only getting started.

From the December 1st until the end of the year, VDARE.com will run our most important annual fundraiser. Our goal is $200,000.

Here’s a glimpse of what you can expect in the coming weeks:

This has been a year of overwhelming obstacles—from the pandemic to the election, from violence in the street and destruction in our cities to censorship in the media, political persecution becomes more and more common.

Yet despite the challenges, VDARE.com has remained constant. Our writers and staff have worked harder than ever to inform the fight America American.

Our movement grows as patriotic immigration reformers all over the country discover our message. At the Berkeley Springs Castle, we now have a safe space to bring the best people together, incubate the best ideas and develop the strategies that preserve America as the founders intended, “for ourselves and our posterity.”

And it hasn’t stopped yet. At VDARE.com, we’ll continue to defend it—with your help.

See you at the castle December 1st—and thank you so much for your support!