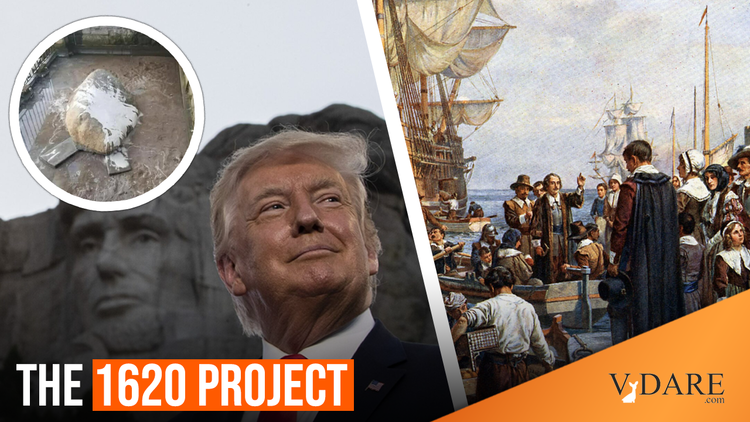 The 1620 Project: To Win Re-election, Trump Should Defend The Mayflower Pilgrims

See, earlier: We Are All Puritans Now! 2020 Election Will Be Debate On Mayflower Anniversary/America’s Founding. Trump Will Win

In January I predicted that the 400th anniversary of the Mayflower voyage would become a dominant campaign theme in 2020—and that the consequent duel between the celebration and its enemies would propel President Donald Trump to re-election. I’m still holding to my prediction, but I’m going to adjust it given recent events.

Originally, I considered this anniversary to be a gift to the Trump 2020 Campaign because the BLM Left would trash the Mayflower Pilgrims, which would motivate the Historic American Nation, who still admire the Pilgrims, to support Trump.

Unfortunately, the Mayflower Voyage has gone largely unacknowledged this summer. Scheduled events in England, America and Holland have been canceled due to COVID-19. Nevertheless, the Antifacrats still deride Plymouth Rock as an object of “White Supremacy,” which is why someone just desecrated the monument [Plymouth Rock vandalized as white paint is poured on waterfront landmark, by Rich Harbert, SouthCoastToday, September 4, 2020].

Now imagine the effect if Trump condemned the desecration of Plymouth Rock—and forced his opponent to do the same?

Trump’s July 4th speech before the Mt. Rushmore Monument was a genuine expression of a love of country the likes of which we have not seen since Ronald Reagan. It also took considerable courage. Say what you want about Donald Trump—he may have overly compromised his America First principles—but it takes genuine courage to speak the truth before a mob that hates your guts and wishes you dead. That is why the Left predictably denounced it [Trump doubles down on divisive messaging in speech to honor Independence Day, by Jeremy Diamond and Jason Hoffman, CNN, July 4, 2020; President Trump Pushes Racial Division, Flouts Coronavirus Rules at Mt. Rushmore Speech, by Stephen Groves, Darlene Superville and Aamer Madhani, Time, July 4, 2020].

Now Trump should deliver a similar speech praising the Mayflower Pilgrims who founded the country. And Trump, as Theodore Roosevelt did before him, should made the case that the Pilgrims did not immigrate to the New World, they settled it. And those whose ancestors immigrated to America afterwards are indebted to them because they paved the way for the rest of us.

What would make this gesture all the more powerful: Trump is himself not a Mayflower descendant. However, many Americans who do not descend from the Pilgrims (like myself) still consider them our forefathers—and that is an example of a phenomenon once favorably known as assimilation.

Naturally, there would be wailing and gnashing of teeth among the Antifacrats in the streets, in the Congress, and in the media. It would be ugly—but it would be effective.

In fact, a Trump Mayflower speech would place our post-American elites between a rock and a hard place and would cinch his reelection.

Just imagine it: How can Cambridge MA resident Senator Elizabeth Warren (NumbersUSA F) defend our Pilgrim forefathers? Her base would never tolerate it. Warren would join their smear and, perhaps more awkwardly, try to defend the Native Americans.

Significantly, disparaging the Mayflower Pilgrims will not go over with New England voters who are proud of their local history. Indeed, there is a very real tension between small town New England and the post-American elites that work at the region’s many prestigious universities and preparatory schools. These elites look down on the locals. A Trump Mayflower speech would encourage these locals to align with him—remember, he lost New Hampshire by less than 3,000 votes in 2016.

Indeed, denigrating the Pilgrims will be a bridge too far for many Americans nationwide. Yeah, George Washington owned slaves but, really, what did William Bradford ever do to anyone? It is hard to imagine how the Antifacrats can come up with a credible angle to bash the Mayflower Pilgrims. But they will try—and with every attempt they will only dig their hole deeper.

President Trump has an enormous opportunity to portray himself as the defender of the American Experiment and to portray his political opponents as America’s natural enemy—which they most definitely are.

At any rate, that is my updated prediction: If Donald Trump does for the Mayflower what he did at Mt. Rushmore, he will not only win reelection, he will gain much needed leverage over the revolutionary mob that has been waging war on the nation our forefathers sacrificed so much to build and preserve.