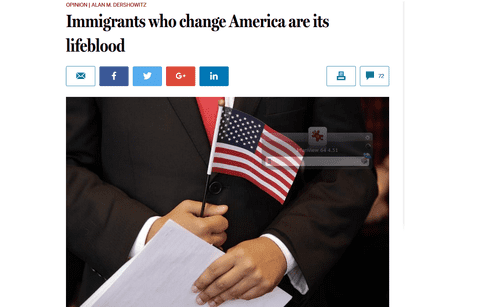 Alan Dershowitz: "Immigrants Who Change America Are Its Lifeblood"

Immigrants who change America are its lifeblood

Alan M. Dershowitz is professor emeritus of law at Harvard Law School and author of “The Case Against Impeaching Trump.”

… When my Jewish-Polish grandparents came to America at the end of the 19th and beginning of the 20th century, many white Protestants whose forebears had been here for generations complained that these “different” immigrants were turning America into a country we don’t “know and love.” To be sure, my grandparents were different. They spoke a different language. They looked a little bit different. They were poor. They were uneducated in the ways of America. They worshiped differently. And they voted Democrat. But despite these differences, or even because of them, they, and their fellow Eastern European immigrants, loved America, and they and their descendants contributed greatly to our nation’s success in the 20th and 21st centuries.

[Laura] Ingraham’s forbearers came from Poland and Ireland. The anti-Polish and anti-Irish sentiments in this country were widespread. Discrimination against Polish and Irish immigrants was pervasive. Yet their descendants, too, have contributed significantly to the success of this great country.

Not, of course, as much of a contribution as that made by my ancestors’ descendants, such as, to pick an example, me. But no doubt these Irish immigrants contributed so much to our culture, such as Bing Crosby’s rendition of “White Christmas,” which was — did you know? — contributed by Irving Berlin, an immigrant. While the other, more … miscellaneous immigrants no doubt contributed something in terms of, say, tons of pig iron smelted or whatever it is that Poles are good at.

… Even when I graduated first in my class from Yale Law School, and was editor in chief of the Yale Law Journal, and a future Supreme Court law clerk, I was turned down for a job by 32 out of the 32 Wall Street firms to which I applied. So were some of my Irish and Polish classmates.

Not that the Irish and Poles contributed graduating first in my class or were editor in chief of the Yale Law Journal, because that was — did I mention this? — me.

Now some of these same descendants of immigrants — like Laura Ingraham, Stephen Miller, and Steve Bannon — are trying to close the door to broad legal immigration because they don’t like how the current immigrants look, speak, vote, and raise their families.

It reminds me of the Russian immigrant comedian Yakov Smirnoff, who had a humorous bit in which he would be standing in front of the Statue of Liberty thanking her for welcoming him to this great country, and then, as he was leaving, he turned back to Ms. Liberty and shouted, “Now please keep the rest of those damn immigrants out.”

That Yakov Smirnoff, he’s such a card! But, seriously, he makes an important point. Our ancestors (i.e., Yakov’s ancestors and my ancestors) built the Statue of Liberty to commemorate the most foundational event in American history: our arrival. For example, much of what you believe you know about American history is our contribution.

Nor would “merit” immigration assure us the kinds of immigrants who would contribute significantly to our country. … When my grandparents came here, all of Eastern Europe was characterized that way, and look at what these immigrants have contributed to our country.

Did I mention how much my ancestors contributed, such as me?

It is a cliché to say that we are a nation of immigrants, but the cliché is so true. … They have contributed to medicine, technology, economics, literature, law, philanthropy, and so much else. … Their children and grandchildren continue to contribute greatly to the economy and culture of this diverse country. … To be sure, some illegal immigrants, and even some legal immigrants, do not contribute to our country. But that is true as well of Mayflower descendants (our first immigrants).