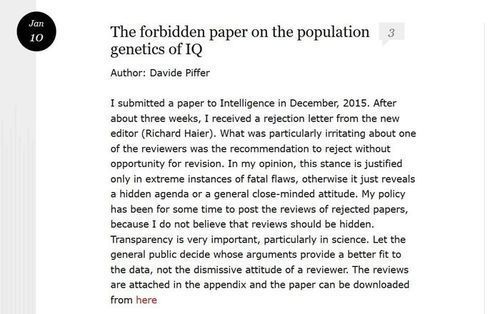 For our Social Justice Warriors, race differences in intelligence absolutely cannot be acknowledged to be genetic. If that happens, they sense, then racial inequality in outcomes will have to be accepted as fair and their entire religion of cultural determinism, the thing that gives SJWs their power, will be discredited. This sends them into paroxysms of fury. Which is why a young Italian researcher based in Israel simply cannot be allowed to publish his compelling proof that genetics do indeed determine race IQ differences.

Background: The SJW response to evidence of race differences in intelligence follows a predictable pattern:

But SJWs with half a brain have to back down when you explain that “intelligence” predicts important life outcomes and IQ test scores positively correlate with objective measures such as reaction times. And that “race” can be reduced to genetic clusters and that individual small race differences push in the same direction leading to crucial variation in genetic illnesses and even in response to drugs. [Richard Lynn, Race Differences in Intelligence, 2006, Gregory Cochran and Henry Harpending, The 10,000 Year Explosion, 2009]

But if SJWs concede this territory, they then assert that

But blacks do best on the most culturally biased parts of the test (which are the worst measures of intelligence) (see Lynn, above). Further, studies finding “stereotype threat” among blacks have been refuted—sometimes people actually score better when they are specifically told they will do badly by virtue of their identity. But most of these refutations of the theory don’t get published. [An examination of stereotype threat effects on girls’ mathematics performance. Developmental Psychology, Ganley et al. (2013).]

So SJWs must concede this territory too. But their next argument:

To this, unbiased psychologists reply that blacks score worst on the parts of the IQ test measuring the most genetic aspects of intelligence, such as “general intelligence.” The differences show up very early in life, with earlier differences being more genetic. 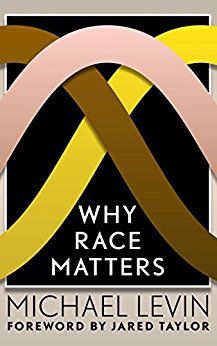 American whites have an average IQ of 100 and American blacks have an average IQ of 85—the difference between a police officer and a low-level security guard. This 15-point black-white difference has been resistant to all attempts at intervention. Blacks who are adopted as babies by white parents, usually upper-middle class with an IQ of about 115, end up with an average adult IQ of just 89, not much higher than the black average (for a good summary see Michael Levin, Why Race Matters, 2005).

Now, at this point things get interesting. The more emotional SJW will simply condemn you as a “white supremacist” and self-righteously storm off to a vegetarian restaurant.

However, her more cerebral friend will present a cleverer argument: Although there is a strong circumstantial case that race differences in IQ are mainly genetic, it hasn’t actually been proven using genetic evidence. And, until that can be done, it is best to remain open-minded, not least because of the awful social consequences if it were proven—which you surely don’t want, unless you’re a “racist.”

This is like a jury refusing to convict a murderer who shot someone in front of scores of witnesses while being filmed on CCTV, because there’s no DNA evidence.

But if SJWs want this evidence, they can now have it. However, the finding is so Politically Incorrect that even academic journals that are generally willing to publish race realist research dare not touch it. The defendant is just too powerful to be convicted without the possibility of parole.

Davide Piffer is a 34 year-old Italian anthropologist with a Master’s degree from England’s prestigious Durham University. He has an IQ of over 132. Piffer is currently studying for his PhD at Israel’s Ben Gurion University.

Piffer has written an analysis of a Genome Wide Association Study (GWAS). Putting it in lay terms, his “forbidden paper” explores the correlation between the percentage of people in a country who carry several dozen genetic variants that are significantly associated with very high educational attainment—based on this GWAS— and average national IQ.

National IQs are robust because they correlate very strongly, at about 0.8, with other national measures of cognitive ability, such as international assessment tests. (Intelligence: A Unifying Construct for the Social Sciences, by Richard Lynn and Tatu Vanhanen,  2012) Very high educational attainment is overwhelmingly a function of high IQ.

Piffer found that the correlation between the prevalence of the polygenic score (the average frequency of several genetic variants) in nations and national IQ was 0.9. This, of course, essentially proves that race differences in intelligence are overwhelmingly genetic.

Now, obviously, Piffer needs to get this in a high impact journal: because he deserves to, for his own career advancement, and also so that it can’t be fallaciously dismissed via an appeal to snobbery—not an insignificant factor in academic life.

And this is where the problems have arisen.

In late 2014, Piffer submitted his paper on this subject to the leading journal Intelligence. One would have assumed there’d be no problem, considering that the journal has published numerous articles on race differences in IQ and has even been condemned by SJWs for doing so [Racism is creeping back into mainstream science – we have to stop it, by Angela Saini, The Guardian, January 24, 2018]. But the editor, Doug Detterman, rejected the paper citing the reviews he received.  In fact, only one of two reviewers recommended rejection; the other was extremely positive. Nevertheless, the decision letter read as if both reviews were negative.

In 2015, Piffer re-submitted the paper to Intelligence. He had successfully dealt with all the criticisms, and the paper should have been accepted for publication.

However, in 2016 Detterman stepped down as head of ISIR and was replaced by Richard Haier. With new reviewers and a new editor, it was rejected out of hand.

Piffer doesn’t give up easily, that’s for sure. Tiring of Intelligence, he improved the paper once more, in light of the critical reviews, and sent it to Frontiers in Psychology, another highly-respected journal. It passed the review process after three rounds, with reviewers recommending publication. However, Piffer tells me, “the editor, after sitting on the reviews for three weeks, decided to reject it, overturning the reviewers’ recommendation.”

Piffer adds: “This decision was kind of unprecedented and especially weird for a journal like Frontiers, whose philosophy is based on transparent review and less editorial power.” 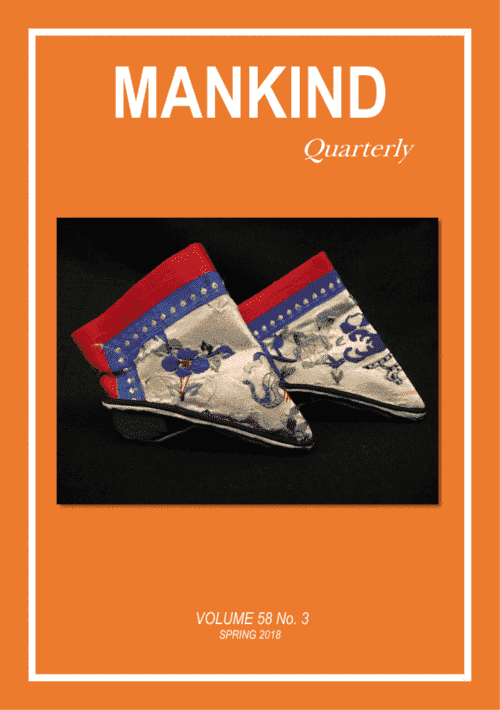 Despairing of getting it in anywhere worthwhile, Piffer posted the “forbidden paper” on a pre-print archive [Polygenic Selection, Polygenic Scores, Spatial Autocorrelation and Correlated Allele Frequencies. Can We Model Polygenic Selection on Intellectual Abilities?, January 27, 2017]. Still, it’s already been cited by a serious researcher in the field.  [Geographic centrality as an explanation for regional differences in intelligence. by Edward Miller, Mankind Quarterly, Spring 2018]

More recently, Piffer self-published another paper, this time on Rpubs, using data from the latest GWAS carried out on 1.1 million people [Correlation between PGS and environmental variables, ]. It confirms his earlier findings, extending them to 52 populations from all over the globe and showing what he calls “fascinating correlations with latitude and polygenic scores of other traits.”

The top place is occupied by East Asians, followed by Europeans and equatorial people further down. “Geographic or genetic distances don’t explain these findings,” stresses Piffer, “as Austronesians (e.g. Papuans and Melanesians) have scores comparable to Africans, despite being genetically more different from African than are Europeans.”

Similarly, Piffer observes that Native Americans score lower than Europeans, despite being genetically closer to East Asians. This suggests that, after the East Asian-Amerindian split, there were later selective pressures for cognitive abilities among Eurasians.

Nobody can fault the sample size. The latest GWAS boasts an army of 1.1 million people and 2400 genetic variants. Piffer has created a plot with scores for the populations from the Human Genome Diversity Project: 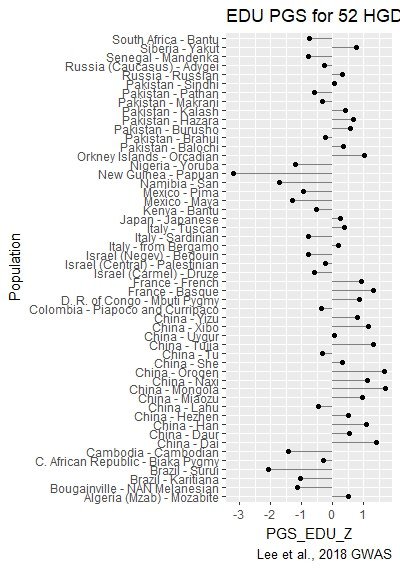 Piffer is now working on getting this into a good journal. He says: “It’s to be hoped that the next editor will have enough intellectual honesty to let my findings see the light of mainstream science.”

Let’s summarize: it has now been effectively proven that racial IQ differences in intelligence are fundamentally genetic. The only counter-argument from our SJW friends is an appeal to authority: “Why hasn’t it been published in a top peer-reviewed journal, then?”

The answer: editors are so frightened of SJWs that they daren’t publish it.

But that won’t suppress results like it used to. Brave academics can simply self-publish their results until an equally brave journal editor can be found.

Postscript: Absurdly, recent developments suggest it is acceptable to note that there is a genetic explanation of the higher incidence of  prostate cancer among some populations e.g, West Africans than in others.

Just not for educational attainment.

To quote George Bush I: This will not stand.