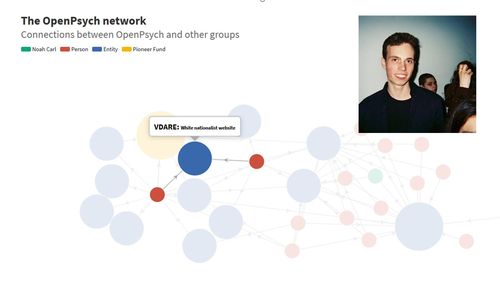 A specter is haunting British and American scientists who have the courage to explore non-PC topics—a specter named Ben van der Merwe. He’s a case study in what goes into making a Cultural Marxist Social Justice Warrior.

Over the last year, this toothy graduate student’s journalism has “exposed” the London Conference on Intelligence [Exposed: London’s eugenics conference and its neo-Nazi links, LondonStudent.com, January 10, 2018], leading to the 1) resignation of James Thompson, the University College London Honorary Senior Lecturer who organized it 2) journalist Toby Young being forced to step down from a quango aimed at reducing Left-think dominance on campuses; 3) the great intelligence researcher Richard Lynn being symbolically stripped of his emeritus professorship; 4) attempts to destroy another attendee, University of Arizona Professor Aurelio Figueredo. [ Pioneering Eugenics in 2018?, By Colleen Flaherty, InsideHigherEd, September 10, 2018]

Van der Merwe is also leading the ongoing campaign against a young Cambridge University sociologist Dr. Noah Carl who attended the London Conference, denouncing him in the New Statesman [No, objecting to Cambridge’s appointment of a eugenicist is not about free speech,  December 20, 2018], Oxford University’s student newspaper [Former Nuffield fellow denounced for “racist pseudoscience”, Cherwell.org, December 7, 2018] and on Twitter .

Helpfully, Van der Merwe has even set up a colorful diagram to show how Noah Carl is connected to everybody else of any importance (including VDARE.com!—which has absolutely no connection with him) on the “far right”.

It seems that Van der Merwe has a vendetta against race realists in general—and Noah Carl in particular. Young Benny-boy really, really hates Carl. And with a little digging into Van der Merwe’s rather poignant life, it starts to become clear why.

“Hatred” is a surprisingly complex emotion. We tend to dislike those who are not in our in-group, Van der Merwe’s in-group being Social Justice Warrior students, Jews—he’s apparently half-Jewish and anti-Semitism witch-hunting is a feature of his journofa activism—and homosexuals (he even once joked that “heterosexuality kills”.

This explains why Ben loathes non-PC academics. But why has he focused so much of his energy on Noah Carl in particular?

Social science suggests that things people hate in others are the issues they dislike or fear in themselves—projected outwards. By projecting, haters can maintain a positive view of themselves, which raises their confidence and, basically, helps them to survive. It distracts them from their insecurities, jealousies, and inadequacies, as it means they can avoid the pain of introspection. But the problem with “projection” is that on a certain level it is doing nothing more than repressing one’s awareness of the aspects of oneself that one reviles. Deep down, the “projector” still hates himself. He is still yet to find a satisfactory identity. [See The Psychology of Hate, By Alison Abrams, Psychology Today, May 9, 2017]

Ultimately, in Ben’s loneliest moments, when he’s not spewing emotional criticism of his fairground mirror image, he gazes into the real mirror and is profoundly unhappy about what he finds there.

Benjamin Guy Van der Merwe was born in Oxford in 1996 with huge advantages in life. His father, Prof Philip Anton Van der Merwe  is a white South African who is Professor of Molecular Immunology at Oxford. His mother, Dr Deborah Lynn Goldman, is a General Practitioner at the Holloway Medical Centre in Oxford . And let’s not forget his older brother, Matthew Van der Merwe (b. 1993), who was an undergraduate at Cambridge University and now researches altruism, perhaps partly inspired by his animosity-filled younger brother.

In one of Ben Van der Merwe articles for college newspaper London Student, he presents a biased appraisal of the British government’s intention to increase university tuition fees, allowing a critic of this proposal to end the article, manipulating the reader to oppose it. [Government push through controversial Higher Education Bill] This is surprising, because young Ben wouldn’t be writing for the London Student if it wasn’t for the astronomical tuition fees his parents paid throughout his childhood to clear his path to a decent university.

But Magdalen College School isn’t merely a “private school,” but what the British call a “public school”—defined as a school whose principal is a member of “The Headmaster’s and Headmistress’s Conference.” Public schools—Eton College is a more famous example—are the elite of private schools. They are attended by the most privileged 4.4% of British children. [Number of pupils attending independent schools in Britain on the rise, figures show, by Richard Garner, Independent, May 1, 2015]

More than 60% of students at Oxford and Cambridge, Britain’s Ivy League, are the products of private schools . This is unsurprising if we consider that the heritability of IQ is about 80%, personality is at least 50% genetic, and intelligence is boosted to its genotypic maximum by just the intellectually-stimulating environment created by public schools—highly intelligent peers, tiny classes, the cream of the teaching profession, and every possible resource employed to ensure a pupil gets a place at Oxford or Cambridge. (See At Our Wits’ End: Why We’re Becoming Less Intelligent and What It Means for the Future, by Edward Dutton & Michael Woodley of Menie, 2018.)

So something has gone wrong if a student at such a school does not get into Oxford or Cambridge. Ben’s older brother, Matthew, had no problem; he even boasts of his perfect A-Level (school leaving certificate) results on his LinkedIn page.

But, tellingly, Ben’s own LinkedIn brag-fest does not supply his A-Level scores, though it does every other achievement in his short life. This is, almost certainly, because he messed-up his A-Levels and was, humiliatingly, rejected from Oxford or Cambridge (see his CV at LinkedIn.com]) and forced to go to the Oxbridge-reject bin (as he probably sees it) of University College, London (UCL). Consistent with this, his degree was in Politics, Philosophy and Economics (PPE), a subject for which Oxbridge is famous; it is the place to study “PPE.”

So, we can start to piece together the abhorrence Ben feels towards Noah Carl. Carl’s father is an American, Princeton-educated former Professor of Architecture at Cambridge while his mother is a lecturer in Architecture at Cambridge. But Carl did his parents proud and sailed through Oxford. Ben, with a foreign-Oxbridge academic father, let Daddy down and skulked off to UCL.

Ben has attempted to correct this humiliation by doing a postgraduate Master’s degree at Oxford—and so helping to ensure that entitled, privately-educated boys are even more over-represented at Oxford than they might otherwise be. In so doing, he likely squeezed out an abler but less indulged and so less academically successful competitor: a working class white graduate; a black boy with a top degree.

Ben is “News Editor” for Oxford’s student newspaper The Cherwell. Student journalism is usually an undergraduate domain, with postgrads busy concentrating on academia or their careers. Ben proudly boasts on Twitter of having been described as a “Monstrous Stalinist.” . Stalin, of course, was renowned for rewriting the past and it seems that Oxbridge-reject Ben wants to be an Oxford undergraduate retrogressively. In a Freudian slip, Ben has even tweeted of suffering from “fresher’s flu”; a “fresher” being a first-year undergraduate.

Thus Ben’s hatred for Carl is apparently underpinned by his shame at his own privilege, his feeling of guilt that he’d be nothing without this academic and financial silver-spoon, but, also, by his repressed jealously of Dr Carl’s greater success.

And why does Carl’s research—on issues such as race—irritate Ben so strongly? What secretly execrated part of himself has he projected onto Carl here?

His wealthy father was at Cape Town University 1980-1990, at the height of the anti-Apartheid struggle, and is descended from a long line of Boers , the very people who established Apartheid and, if the Leftist narrative is to be believed, stole the land of the black man. Ben undoubtedly wouldn’t be studying at Oxford if it were not for his ancestors allegedly exploiting and oppressing black people.

Ben appears to hate these parts of himself. Indeed, he seems to hates so much about himself: the inherited racism and privilege; the public school background without which he likely would have gone to the British equivalent of a community college; the crushing disappointment he was to his parents only a few years ago; his failure in the battle of sibling-rivalry…and it can all be projected on to Noah Carl and the “elitist”, “eugenicist” London Conference on Intelligence which is fascinated by the way that clever people, like Ben’s parents, are attracted to each other and produce clever children, like Ben’s brother Matthew van der Merwe.

And there’s more. Ben’s parents are divorced. Being from a broken home is associated with mental instability due to the insecurity it causes in the child, leading to that child failing to develop a secure and happy sense of self. The child may also inherit the characteristics, such as high mental instability, that in turn predict divorce. [Personality: What Makes You Who You Are, By Daniel Nettle, 2007.]

Anxiety interferes with your ability to think logically, something so conspicuous in philosopher Ben’s fallacies: for example, that Richard Lynn is involved in Mankind Quarterly and that the founder of that journal (established 1961) had alleged Nazi connections, so that Lynn’s a Nazi!  We might as well argue that Ben van der Merwe has Afrikaner ancestry, and so did D. F. Malan, the South African PM who first implemented Apartheid, so Ben must be a racist.

And anxiety is associated with dogmatism [See Dogmatism, extraversion and neuroticism in adolescents, By B. Gilliland et al., Journal of Psychological Researches, 1979]. Hence Ben’s signing an Open Letter supporting the Communist Morning Star newspaper but complaining that it had carried another Open Letter (these are Leftists, remember) opposing the—apparently remarkable—violence against British feminists who have questioned whether “trans women” should be counted as women. Dismissing this complaint, Ben’s Open Letter also insisted that “trans women” be counted as women for the purposes of the Labour Party’s attempt to impose quotas on itself via All Women shortlists for candidate selection.  See Morning Star Readers Against Transphobia, (GoogleDocs).

Let’s hope that one day, when Ben is a bit older and wiser, he’ll be able to look into the mirror and forgive what he sees. Once he starts showing compassion for himself, he might begin to see the good side of other people—such as the intellectual courage that is so obvious in Noah Carl.