Indians Aren't That Intelligent (On Average)

In this article, I summarize the evidence for an average IQ of 85 in the group designated South Asian/North African. The people of Bangladesh, India, Pakistan, Iraq, Iran, the Gulf States, the Near East, Turkey and North Africa have an IQ just below the world average of 90. This is much higher than the IQ of 70 found for Black Africans, but it is also much lower than the IQ of 100 found for Europeans.

As VDARE.COM readers will know, IQ tests were constructed in Western Europe and North America and standardized with an average IQ of 100. The "normal" range goes from "dull" (IQ around 85) to "bright" (IQ around 115). IQs of 70 suggest handicap, while IQs of 130 and above predict giftedness.

There are large inequalities in average IQ scores between groups. Herrnstein and Murray's (1994) The Bell Curve

In the 1970s the IQ debate became worldwide when British psychologist Richard Lynn showed that compared to a White IQ average of 100, East Asians average about 105 and sub-Saharan Africans around 70.

By 2006, Lynn had tabulated 620 IQ studies in 133 different countries. He clustered the countries into the ten genetic groupings identified by L. L. Cavalli-Sforza et al. in their mammoth 1994 History and Geography of Human Genes

. The world average IQ had to be calibrated downwards to 90, as shown in the map. 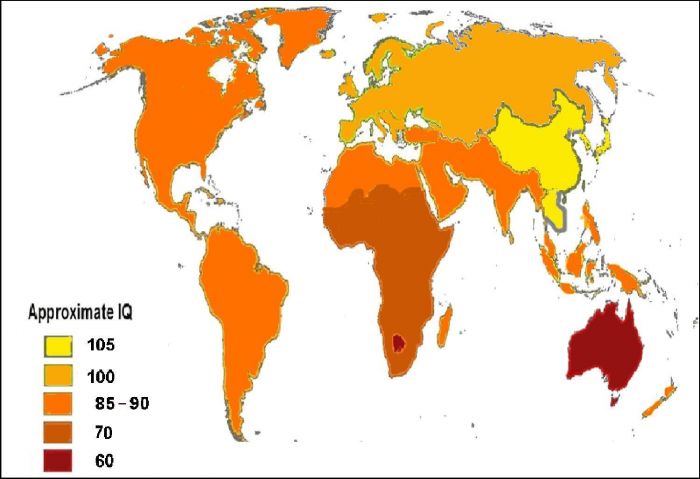 East Asians (Chinese, Japanese and Koreans) obtain the highest mean IQ at 105. Europeans follow with an IQ of 100. Some ways below these are the Inuit or Eskimos (IQ 91), South East Asians (IQ 87), Native American Indians (IQ 87), Pacific Islanders (IQ 85), and South Asians and North Africans (IQ 84). Well below these are the sub-Saharan Africans (IQ 67), the Australian Aborigines (IQ 62), the Bushmen of the Kalahari Desert, and the Pygmies of the Congo rain forests (IQ 54).

Even a few years ago, news of drastically lower mean IQs for any population group—as low as 70 to 85 in Africa—would have been considered not only an absurdity, but also an injustice. Yet new empirical work continues to show a world IQ average of 90. It continues to show that mean IQs of 70 are found routinely in sub-Saharan Africa and that mean IQs of 70 to 90 are typical of many other regions of the world. Outside of European and East Asian populations, an average IQ as high as 100 is seldom found.

IQ scores are valuable, of course, because of their utility in forecasting. IQ differences between people typically show up by 3 years and remain consistent over the course of life. IQ scores usefully predict the capacity to learn and also to reason logically and flexibly. They can also effectively predict work behavior, child abuse, crime and delinquency, health, accident proneness, and civic responsibility.

The Bell Curve documented that IQ scores predict equally well for all groups. For example, Blacks with IQs of 114 have an equal (or better) chance of graduating from college than Whites and Latinos with the same IQs—68%, 50%, and 49%, respectively, and also of getting top jobs (likely a result of affirmative action programs).

In their book IQ and Global Inequality

Thus, IQ scores apparently explain why some countries are rich and others poor. They also explain why economic prosperity varies from one sub-group to another within countries.

Back to the Indians.

Classical anthropology often placed South Asians and North Africans in the same taxonomic group as Europeans and designated them both as Caucasoids. But modern genetic studies, such as those by L. L. Cavalli-Sforza, show the South Asians/North Africans are a surprisingly distinct "genetic cluster". They can be distinguished from Europeans to their north as well as from sub-Saharan Africans to their south and the other Asian groups to their east.

Lynn's finding of an average South Asian IQ of 85 has been corroborated by Jan te Nijenhuis and colleagues in Holland, who analyzed thousands of respondents including nationally representative samples. They found an average IQ of 81 for first generation Turks and Moroccans living in the Netherlands. They found an IQ of 88 for the second generation, who spoke Dutch and had been educated in the Dutch school system. They published their results in the 2004 European Journal of Personality.

Another finding of a low South Asian IQ came from a review of studies on the Gypsies (or Roma as they are now often called). This South Asian population migrated to southeastern Europe from northwest India between the 9th and 14th centuries and currently number between 4 and 10 million. Their average IQ in the Czech Republic and Slovakia, based on a review of 10 studies by Petr Bakalar, is below 80. His review was published in the 2004 Mankind Quarterly.

I too have confirmed the very low IQ for the Roma. This was in a study carried out in and around Belgrade, in Serbia. My colleagues and I individually tested 323 16- to 66-year-olds over a two-year period in three separate communities using the Raven's Matrices, a widely-used, culture-reduced, non-verbal test of general intelligence, and four other tests usually given to children. On these tests, we found the Roma averaged at the level of Serbian 10-year-olds. (Our study was published in the January 2007 issue of Intelligence.)

I considered the question of whether the South Asian-European group difference is due to the genes or culture. My colleagues and I were able to do this because of the large amount of data available on the Raven's test from twins raised together and apart, as well as from high school and university samples of East Asians, Europeans, South Asians, Coloreds, and Blacks in South Africa.

We used standard procedures to calculate the heritabilities for each of the puzzles on the Raven's test. Heritabilities are the proportion of variance accounted for by genetic factors. Since identical twins share 100% of their genes and fraternal twins share only 50%, doubling the difference between their correlations provides one simple estimate of heritability. In the case of identical twins raised apart, their similarity provides a direct estimate of heritability, because they share no upbringing environment.

In 55 comparisons, including three independent samples of South Asians, we consistently found the European-South Asian group difference was more pronounced on the more heritable test items. We found this relationship held even after statistically controlling for possible confounds. (These results were published in the July 2007 Proceedings of the Royal Society of London.)

Our study indicates the remarkable cross-cultural generalizability of test scores. South Asians, Europeans, East Asians, and Africans all appear to have the same combination of genetic and non-genetic influence on cognitive ability. Puzzles found relatively easy (or difficult) by one group are found relatively easy (or difficult) by the others. There is no evidence of any population-specific cultural effect.

Of course, all the differences described are averages. There are bell-shaped distributions around each average. The full range of behaviors, good and bad, is found in every group. No group has a monopoly on virtue or vice, wisdom or folly, capacity or incapacity.

VDARE.COM readers have heard about this research through my reviews of Lynn's 2006 book Race Differences in Intelligence (here), and his other 2006 book (with Tatu Vanhanen), IQ and Global Inequality (here). They may also have read about my research on university students in South Africa, which corroborated the low IQ of 70 for sub-Saharan Africans (here). Further, they may have read the essay I wrote reviewing the evidence that the East Asian-White-Black IQ differences were 50 to 80% genetic (here). They may also have read Steve Sailer’s review of one of Lynn’s IQ books (April 23, 2006) and his subsequent discussion of Charles Murray’s essay on the remarkably high Jewish average IQ (here).

Given the euphoria current about the Indian economy—the fastest growing of any large polity after China—and all the adulation for Indian high tech types, the news that, in aggregate, India is so weakly positioned is going to be difficult for some to accept.

However, as Steve Sailer noted in his April 23, 2006 VDARE.COM essay on Richard Lynn’s book, the results regarding the IQ difference between China and India are remarkably consistent across time.

I suppose the answer to the apparent anomaly of so many well-known high IQ Indians must be:

The finding that the North African/South Asian grouping differs in cognitive ability from Europe has important political implications. Many South Asians are Muslim and form part of what Harvard historian Samuel P. Huntington (1998) referred to as the  "Clash of Civilizations

". The evidence shows that the European-South Asian IQ difference is substantially heritable, which means as a practical matter intractable. What the West can expect from these countries has to adjust to this reality.

Immigration policy too, must be adjusted. Mass immigration from the region is very likely to lower the average IQ of the receiving Western countries, and consequently be dysfunctional. (Conversely, the incentives for the relatively few high IQ people from these countries to emigrate are likely to be extremely high. Living in a low IQ milieu is not efficient for them.)

We must accept that gene-based individual and group differences constitute normal variation within the human condition. The differences reflect heritable g, the general factor of intelligence, rather than culturally specific ways of thinking. As the trend toward a more global economy continues, average group differences in cognitive performance are likely to become more salient, both within and across countries.

We can pretend this reality does not exist. But it is not going away.

J. Philippe Rushton  is a professor of psychology at the University of Western Ontario, the author of Race, Evolution, and Behavior. This essay is based on his recent articles published in Intelligence, January 2007 (PDF), and Proceedings of the Royal Society of London, July 2007 (PDF).