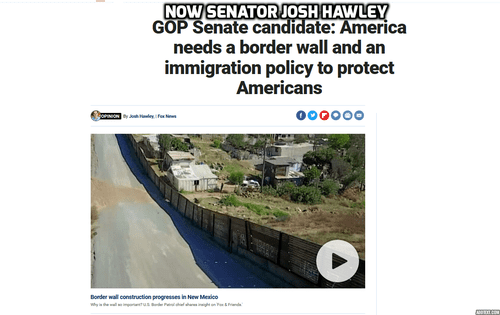 The midterms are finally over and the “Blue Wave” didn’t wipe away the Republicans. While the GOP lost the House, the party looks to gain three seats in the Senate and it won two critical gubernatorial races in Florida and Georgia, although Stacey Abrams has refused to concede and there are reports of attempted vote fraud in Broward County. More significantly, Trump should be happy that the party is more like him than ever now.

Many of Trump’s “moderate” critics—such as Carlos Curbelo—lost their seats. Several newcomers heading to Washington are on board the America First agenda. Paul Ryan is gone, and the next leader of the Republican House caucus will certainly be more loyal to the President. Best of all, immigration patriot Steve King was the only Republican congressman to keep his seat in Iowa, doing much better than his squishy colleagues. [Loss of centrist Republicans cements GOP as party of Trump, by Josh Siegel, Washington Examiner, November 7, 2018]

Stewart ran as a barnstormer who embraced controversy and ran on immigration restriction and protecting Confederate monuments. He was hated by the Virginia GOP Establishment and had little support from party institutions as he went into the general election. Additionally, the long-time Trump supporter was beset by gaffes and exposés showing ties to “white nationalists” throughout the election.

The lack of support and constant Main Stream Media attacks paid off on Tuesday for Stewart’s Democratic opponent Tim Kaine. Kaine won by nearly 16 percentage points over Stewart in a state once considered a battleground. Needless to say, Conservatism Inc. types blamed Stewart’s Trumpism for his devastating loss [Virginia Senate: 'Trump Before Trump' Republican Stewart Loses to Kaine, by Michael Warren, The Weekly Standard, November 6, 2018] But that assumes an Establishment moderate would have done much better in Virginia. Not so.

Ed Gillespie was also clobbered last year in Virginia’s gubernatorial race, despite his respectable credentials and the full support he received from the Establishment. Gillespie lost by 10 points with 67 percent of voters Virginia voters being white—Stewart lost in an election where 66 percent of the votes were white. You also have to remember is that Northern Virginia is populated by wealthy white liberals who only like Republicans that hand out lucrative defense contracts. Virginia is a blue state thanks to demographic change, and no campaign strategy can alter that fact.

Butt the same time Stewart was being torn apart, a man running on a similar agenda was winning in another battleground state. Missouri’s new senator Josh Hawley beat Claire McCaskill by a comfortable margin on the strength of the America First agenda.

In a September op-ed, Hawley decried how “our ruling elite” have become “globalists first, Americans second” when it comes to immigration. “McCaskill and her globalist allies live in a fantasy world where citizenship doesn’t matter and national borders are embarrassments. Their most important priorities are getting cheap labor at home and cheap products from aboard,” Hawley wrote. [America needs a border wall and an immigration policy to protect Americans, by Josh Hawley, Fox News, September 12, 2018]

This is the kind of rhetoric that usually terrifies the Weekly Standard and makes them hit the disavow button. But they made no rumbles against the clean-cut and highly-educated Hawley. Hawley continued:

We need an immigration policy that works for the citizens of this country, not the global elite. That begins with securing the southern border. Enough apologies and temporizing. Build the wall. Fund the border patrol. Back ICE. You can count on me to fight for all of the above.

Next, we need to reform our legal immigration system to make it work for Missouri workers. For decades now, we’ve admitted millions of immigrants with few or no skills—the percentage of foreign-born is at its highest levels in nearly a century.

These low-skill immigrants are competing for jobs with folks in our own country struggling to find work, while driving down wages for those who are working hardest.

It’s time to do right by American workers. Limit the number of low-skilled immigrants who come to this country. End the visa lottery system. End chain migration. Replace that with a skills-based immigration system that prioritizes the training and know-how we need to create new jobs in this country for our own people.

This is patriotic immigration reform. And it now dominates the mainstream of the party.

Hawley is also strong on Big Tech censorship. As Missouri attorney general, he took action against Google and Facebook over their sketchy business practices and touted his opposition to Big Tech malfeasance as a selling point on the campaign trail. [The only guy in America brave enough to take on Google, by Salena Zito, New York Post, March 24, 2018]

The Missouri senator-elect wasn’t alone in winning a competitive race on immigration. So did Marsha Blackburn in Tennessee, Brian Kemp in Georgia, and Ron DeSantis in Florida. All three of these candidates were backed by the GP Establishment in the general election. [Ron DeSantis Won Florida Governor's Race by Tying Himself to Trump, by Abby Vesoulis, TIME, November 7, 2018] Blackburn and Kemp were Establishment favorites from the beginning. Martha McSally is currently ahead in the too-close-to-call Arizona Senate race, and she made immigration a key part of the race after reversing herself on the issue to appeal to immigration patriots. She was the Establishment pick in her GOP primary. [GOP goes back to the immigration well in Arizona, by Nicholas Riccardi, Associated Press, September 19, 2018]

Tuesday shows the old paradigm of “Tea Party vs. Establishment” is no longer determinative for National Conservatives. Sure, there are still some examples of Republican perfidy against good people, such as National Republican Congressional Committee chairman Steve Stivers condemning Steve King and the party ditching Corey Stewart. But those are becoming rarer than before. It’s worth noting that most GOP leaders refused to disavow King in spite of pressure from the Anti-Defamation League.

The future of the party is Trumpian, and there are now more people like the President in Congress. Candidates realize that it is better for their electoral prospects to run on a Hawley platform than positioning themselves as the next Jeff Flake. The voters care more about immigration than cutting the capital gains tax, and the party is finally beginning to learn this. The Establishment isn’t quite perfect, but it’s way better than it was in the past—and it has the ability to win.

The best strategy going forward is for Trump to mold the party leadership in his image than to back anti-establishment challengers automatically. The dismal results of Roy Moore show that the latter strategy is not as viable as getting Establishmentarians adopting Trumpism. It may not be ideal, but it’s sure to make the party more Trumpian in the long term. With Trump critics decimated and more loyalists in Congress, it’s going to be harder for Republicans to defy the America First agenda.

Both the base and leadership, to a surprising degree, now agree on immigration. Expect more Josh Hawleys and fewer Corey Stewarts in the years ahead.