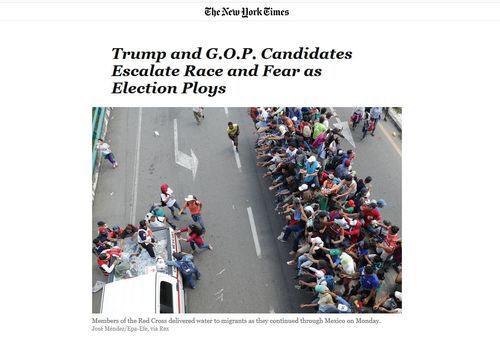 The New York Times is angry that Trump is trying to distract America from the real issues, such as America’s ongoing BBQ Becky Crisis, with his crazy talk about irrelevancies like “the border” and “national identity.”

President Trump on Monday sharply intensified a Republican campaign to frame the midterm elections as a battle over immigration and race, issuing a dark and factually baseless warning that “unknown Middle Easterners” were marching toward the American border with Mexico.

The unsubstantiated charge marked an escalation of Mr. Trump’s efforts to stoke fears about foreigners and crime ahead of the Nov. 6 vote, as he did to great effect in the presidential race. Mr. Trump and other Republicans are insistently seeking to tie Democrats to unfettered immigration and violent crime, and in some instances this summer and fall they have attacked minority candidates in nakedly racial terms.

Mr. Trump is now railing daily in speeches and on Twitter against the migrant caravan moving north through Central America, and on Monday called it a national emergency. The caravan has dominated conservative talk radio and Fox News, where there has also been loose speculation about a link to terrorism. The apparently groundless inclusion of “unknown Middle Easterners” to the caravan echoes Mr. Trump’s longstanding practice of amplifying fears about Islamic militants on the campaign trail.

“That is an assault on our country and in that caravan you have some very bad people and we can’t let that happen to our country,” the president said at a rally in Houston on Monday night. Mr. Trump suggested without any proof that the opposition was involved in instigating the caravan. “I think the Democrats had something to do with it,” he said.

In targeting the caravan, the president appears determined to end the election season with a cultural fight over national identity rather than the issues that party leaders initially wanted to run on, like tax cuts or the economy.

What kind of lunatic is Trump to run on being pro-American rather than to listen to Paul Ryan’s wisdom about campaigning upon capital gains tax cuts?

But Mr. Trump has not been alone in seeking to divide the electorate along racial lines this fall: As the congressional elections have approached, a number of Republican candidates and political committees have delivered messages plainly aimed at stoking cultural anxiety among white voters and even appealing to overt racism.

Now, back to the NYT’s nonstop coverage of the BBQ Becky Crisis.