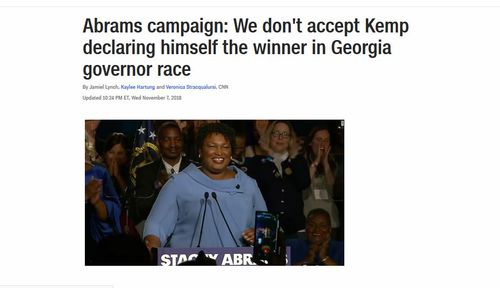 Georgia Results In (Sort Of) But Stacey Abrams Won't Concede

By all accounts, white man Brian Kemp has defeated black woman Stacey Abrams in their duel to become Georgia’s next governor. With 100 percent of precincts reporting, Kemp received 1,973,033 votes (50.33 percent) and Abrams received 1,910,152 (48.72 percent). As Kemp crossed the threshold of 50 percent, the election won’t even go to a run off.

Except that Abrams is refusing to concede the election. With Kemp ahead by a mere 62,881 votes, the Abrams team is convinced that absentee ballots, military ballots, and perhaps normal ballots that are somehow still uncounted, may be enough not to win outright---but to keep Kemp from avoiding a runoff. How many of these missing and uncounted ballots are out there? Nobody is quite sure… as they have yet to be counted.

Each county has until early next week to make their tabulations official, and importantly, any kind of recount or election investigation would be led by Georgia’s Secretary of State—a man by the name of Brian Kemp. Although many have asked that he recuse himself of this duty, he has refused to do so. Tuesday (as in: election day), a lawsuit was filed against him demanding he step down from his current position. [Who won? Runoff? What’s going on with the Georgia governor’s race. by Thomas Wheatley, Atlanta Magazine, November 7, 2018.]

On the one hand, it strikes me as very optimistc of the Abrams camp to think that the remaining ballots are so monolithically for her that a runoff is needed. Even if it came to that, many factors would favor a Kemp victory in a runoff: 1) Kemp won more votes than Abrams in the first round. 2) The libertarian candidate for governor, Ted Metz, won 37,086 votes (0.95 percent), and those votes will largely skew to Kemp. 3) Bad weather tends to benefit Republicans, and the weather in Georgia will certainly be worse in December (when the runoff would take place) than it was yesterday. 4) If it comes to a runoff, your dutiful servant, Nathan Doyle, will saddle up and canvas some more.

On the other hand, if this election gets tied up in the courts, Kemp could be cheated of a victory. The Left uses our court system as blunt instrument against election results they dislike, and have done so for decades, most notably against patriotic immigration ballot measures in California in the ‘90s. Georgia has very strict voter ID and registration laws, and the Left is absolutely convinced this is to keep non-whites from voting. Hypothetically, a lawsuit could be launched alleging that the election was null and void because the disparate impact of voting laws kept x number of non-whites from voting, thus violating their civil rights. While not especially likely, it is not impossible to imagine a Leftist judge hearing this argument, accepting it, and demanding a new election. This would open up a pandora’s box, at which point any number of different things could happen. Again, while not likely, it is not impossible.

Kemp’s open attempt to steal the election is a big story but it feels like it should be an even bigger story. And if he wins, I think any responsible report on his victory should include his dedicated efforts to keep as many voters from the polls as possible.

I lean towards thinking that Kemp will be seated as governor, but we will just have to wait and see. Regardless, if you are looking for good news, take comfort in that Ron DeSantis, the white Trumpian Republican in the Florida governor’s race, defied the polls and beat black socialist Andrew Gillum. That is superb news, as The New Republic was correct in claiming last week that the race represented a, “Referendum on Trump-Era Racism.” [“Florida’s Referendum on Trump-Era Racism” by Alex Shephard, The New Republic, November 2, 2018.] White America won that referendum on election day