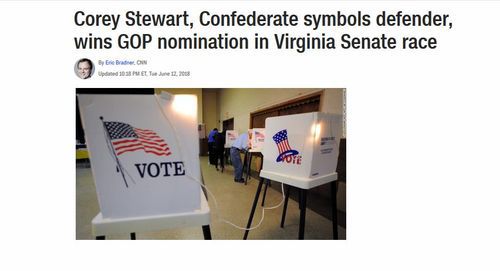 Corey Stewart’s Virginia Victory Raises Question: Does Conservatism Inc. Even Have A Constituency?

The victory of Corey Stewart in the Virginia Republican Senate primary has led to the greatest outbreak of Main Stream Media wailing since Donald Trump won the GOP nomination for the presidency. The hoaxsters over at Rolling Stone whined, “Virginia Republicans Are Rallying Behind A True Bigot: Corey Stewart.” [by Tim Dickinson, June 14, 2018] Vox explains to its audience of bugmen that the new GOP nominee is an “alt right hero.” [Virginia Republicans just nominated an alt-right hero to run for Senate, by Jane Coaston, June 13, 2018] And CNN, trying to be as objective as it can be, simply says Stewart “built his public image on championing Confederate symbols”. [Corey Stewart, Confederate symbols defender, wins GOP nomination in Virginia Senate race, by Eric Bradner, June 12, 2018]

Yet despite wailing from journalists, Stewart is hardly outside the mainstream, especially on the Confederate monument issue. According to a study published in January 2018, a plurality of Virginia voters support keeping the Confederate monuments where they are, with 49 percent arguing for the status quo and 33 percent saying they should be removed, either by being relocated to museums or presumably destroyed [VCU Poll: Nearly half of Virginians want Confederate monuments left in place, by Ned Oliver, Richmond Times-Dispatch, January 9, 2018]. And GOP Establishment favorite Ed Gillespie, largely because of pressure from Stewart, also defended Confederate monuments at the last minute during the 2017 Virginia gubernatorial primary. It’s journalists who think the status quo is beyond the pale that are being extreme.

Stewart is also described as “provocative” partially because of his attacks on MS-13. [Senate GOP hopeful Corey Stewart ties gang to safety threat in Virginia, by Antonio Olivo, June 2, 2018] However, Gillespie did the same in his race, and President Trump is doing the same even now.

Though the MSM seems to regard him as a provocateur, Corey Stewart is no gadfly. Unlike Gillespie, Stewart is a former elected official, chair of the Prince William County Board of Supervisors. He is a notable Republican elected official in the increasingly Democratic territory of northern Virginia. He also clearly has the loyalty of his constituents—Stewart trailed in the election results for most of the night until Prince William County reported and pushed him over the top.

The difference: everyone seems to know that, unlike Ed Gillespie, Corey Stewart actually believes what he is saying. Gillespie even admitted in a conversation with David Axelrod that he wanted to run aids on tax cuts and “criminal justice reform” (i.e. letting more criminals out of prison) but that wasn’t “going to move numbers and help me win” [Ed Gillespie Is Sad He Was Forced To Run Racist Ads in Virginia’s Governor’s Race, by Ed Kilgore, New York Magazine, December 12, 2017]. In other words, Gillespie likely had no intention of defending Confederate memorials or dismantling MS-13 if he made it to the governor’s mansion. Stewart will fight for these causes if he makes into the Senate, so naturally he has far stronger opposition.

Shapiro ran straight to Vox to denounce the Republican nominee after his victory, smirking that Stewart’s nomination is “politically stupid” and “ends with the nomination of utterly unpalatable candidates who toxify the party as a whole.”

Of course, Shapiro said essentially the same thing about President Trump, denouncing the then-candidate for “tacit appeals to racism,” among other things [Shapiro: I Will Never Vote For Donald Trump. Here’s Why. By Ben Shapiro, Daily Wire, March 4, 2016].

Shapiro of course is quite comfortable with discussing what he evidently regards as the necessity of population transfers of Palestinians from Israel. Somehow, he displays a sudden ignorance of demographic realities when it comes to what is ostensibly his country.

Such complaints from talking heads aren’t terribly important—after all, in the end, the real constituency of a Professional Conservative is Leftist reporters whom Beltway Right politicos rely upon to give them recognition.

Yet Stewart’s opponent also tried to label him a “racist.” Nick Freitas sounded a John Kasich like note by sanctimoniously denouncing “racism” and “hate” during the GOP primary debate. “If we are to continue our party’s legacy, we must reject Corey Stewart’s dog-whistling of White supremacists, anti-Semites, and racists,” he preened [Senate candidate Nick Freitas unloads on rival Corey Stewart: “Time we defeat the hate mongers” by Patrick Wilson, Richmond Times-Dispatch, June 6, 2018].

Stewart fired back forcefully but fairly, decrying how Freitas was using the “Leftist tactics of CNN” but still saying he had “a lot of respect for him” and looked forward to working with him in the future. He also struck a classy note after his victory.

Dan McCarthy, former Editor of The American Conservative,  now editor at ISI’s Modern Age, accurately noted that the defeat of Freitas, who had been backed by Rand Paul, showed Donald Trump had defeated the “libertarian moment.”

Anti-government sentiment was most powerful with Republican voters as an expression of anti-elitism and resistance to a government run by a liberal Democrat like Barack Obama. Emphasizing cutting government on principle, as libertarians did, would never be as effective as emphasizing fighting the liberals, with or without shrinking the state. Trump was not the most anti-government candidate, but he was the most anti-left. The libertarian position, by contrast with Trump, seemed like just a more thoroughgoing version of what every other supposedly conservative Republican believed about cutting government.

Yet much of the Beltway Right, not just libertarians, seems committed to simply recycling the old slogans. What’s more, they seem to be determined to make sure the GOP continues to lose, rather than making the transformation to a National Conservative party that can generate enough white turnout to win in rapidly changing states like Virginia.

Already, the National Republican Senatorial Committee is refusing to spend money on the race, obviously hoping to throw it just as the GOP Establishment did in Alabama [Senate GOP shuns Stewart in Virginia, by Burgess Everett, Politico, June 13, 2018].

Many in both the GOP and Conservatism Inc. have no stake in political victory, preferring to either carry water for their corporate donors or parasitically profit off grass-roots outrage while not doing anything to combat the Left.

Congratulations to Corey Stewart for his great victory for Senator from Virginia. Now he runs against a total stiff, Tim Kaine, who is weak on crime and borders, and wants to raise your taxes through the roof. Don’t underestimate Corey, a major chance of winning!

More importantly, President Trump is still the leader of the GOP, and Stewart’s victory shows the nationalist message is increasingly taking hold among the grassroots. The real question is whether Conservatism Inc. even has a real constituency anymore—and if not, if the new nationalist movement can build (or subvert) the institutions needed to replace it.