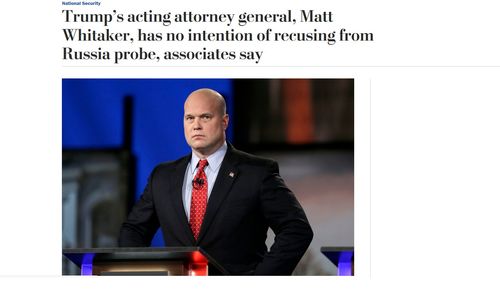 Patrick J. Buchanan: Russiagate And The War for the Soul of America—Trump Is Fighing Back!

The war in Washington will not end until the presidency of Donald Trump ends. Everyone seems to sense that now.

This is a fight to the finish.

A postelection truce that began with Trump congratulating House Minority Leader Nancy Pelosi—"I give her a great deal of credit for what she's done and what she's accomplished"—was ancient history by nightfall.

With the forced resignation of Attorney General Jeff Sessions and his replacement by his chief of staff, Matthew Whitaker, the long-anticipated confrontation with Robert Mueller appears at hand.

Sessions had recused himself from the oversight role of the special counsel's investigation into Russiagate. Whitaker has definitely not.

Before joining Justice, he said that the Mueller probe was overreaching, going places it had no authority to go, and that it could be leashed by a new attorney general and starved of funds until it passes away.

Whitaker was not chosen to be merely a place holder until a new AG is confirmed. He was picked so he can get the job done.

For two years, Trump has been under a cloud of unproven allegations and suspicion that he and top campaign officials colluded with Vladimir Putin's Russia to thieve and publish the emails of the Clinton campaign and the Democratic National Committee.

It is past time for Mueller to prove these charges or concede he has a busted flush, wrap up his investigation and go home.

And now, in T.S. Eliot's words, Trump appears to have found "the strength to force the moment to its crisis."

His attitude toward Mueller's probe is taking on the aspect of Andrew Jackson's attitude toward Nicholas Biddle's Second Bank of the United States: It's "trying to kill me, but I will kill it."

Trump has been warned by congressional Democrats that if he in any way impedes the work of Mueller's office, he risks impeachment.

If the House Judiciary Committee of incoming chairman Jerrold Nadler wishes to impeach Trump for forcing Mueller to fish or cut bait, Trump's allies should broaden the debate to the real motivation here of the defeated establishment: It detests the man the American people chose to lead their country and thus wants to use its political and cultural power to effect his removal.

Even before news of Sessions' departure hit Wednesday, Trump was subjected to an antifa-style hassling by the White House press corps.

One reporter berated the president and refused to surrender the microphone. Others shouted support for his antics. A third demanded to know whether Trump's admission that he's a "nationalist" would give aid and comfort to "white nationalists."

By picking up the credentials of CNN's Jim Acosta and booting him out of the White House, Trump has set a good precedent.

John F. Kennedy was beloved by the media elite. Yet JFK canceled all White House subscriptions to the New York Herald Tribune and called the publisher of The New York Times to get him to pull reporter David Halberstam out of Vietnam for undermining U.S. morale in a war in which Green Berets were dying.

Some journalists have become Trump haters with press passes. And Trump is right to speak truth to mainstream media power and to accord to the chronically hostile press the same access to the White House to which Robert De Niro is entitled. Since the days of John Adams, the White House has been the president's house, not the press's house.

Pelosi appears the favorite to return as speaker of the House. But she may find her coming days in the post she loves to be less-than-happy times.

Some of her incoming committee chairs—namely, Adam Schiff, Maxine Waters and Elijah Cummings—seem less interested in legislative compromises than in rummaging through White House files for documents to damage the president, starting with his tax returns.

To a world watching with fascination this death struggle convulsing our capital, one wonders how attractive American democracy appears.

And just how much division can this democracy stand?

We know what the left thinks of Trump's "base."

Hillary Clinton told us. Half his supporters, she said, are a "basket of deplorables" who are "racist, sexist, homophobic, xenophobic, Islamophobic—you name it." Lately, America's populist right has been called fascist and neo-Nazi.

How can the left "unite" with people like that? Why should the left not try to drive such "racists" out of power by any means necessary?

This is the thinking that bred antifa.

As for those on the right—as they watch the left disparage the old heroes, tear down their monuments, purge Christianity from their public schools—they have come to conclude that their enemies are at root anti-Christian and anti-American.

How do we unify a nation where the opposing camps believe this?