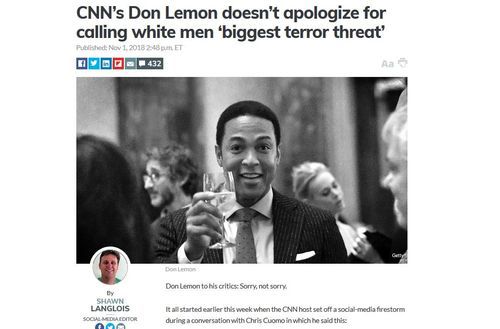 John Derbyshire Asks: Are We At Peak Anti-White?

We're coming up to nationwide elections just as elite hatred of white people—including of course by Goodwhite ethnomasochists—is reaching a new level of intensity.

Just in the past few weeks:

Yes, the Establishment's id has been leaking out of its packaging all over. The hate-whitey forces are now so bold and confident, they feel no need to hide their true feelings of seething hatred towards us Deplorables.

Will this frankness on the part of Goodwhites play into next week's midterm elections? It was surely a factor in the election of Donald Trump two years ago. As elite contempt for the people they rule over became ever more obvious, it was natural that we peasants, gullible and dimwitted though we are, should start to notice and develop resentment.

Broad public emotions like that Badwhite resentment of the elites have lives of their own, though—ups and downs, fevers and lulls. It's possible the election of Donald Trump got it out of our system for a while, so that on November 6th we'll vote on other stuff—health care, taxes.

It's also possible that Trump's failure to deliver on some of his key 2016 promises—building a border wall, disentangling us from pointless wars and alliances—has disillusioned many of his 2016 supporters, leaving them less likely to vote.

Contrariwise, it may be that all this anti-white stuff coming out into the open, along with the visuals of thousands of brown people from outhouse countries trying to storm our border, will fire up Badwhites and maybe move some more Goodwhites into the Badwhite camp, reducing the Blue Wave to a mere ripple, perhaps even—who knows?—generating a Red Wave.

We shall find out next week.