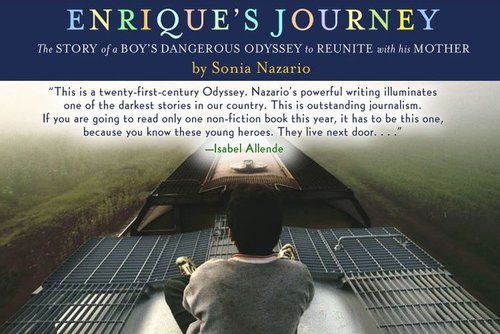 Suicide of the West paradox: public policy now forces U.S. parents to raise their kids in a bubble of fanatic safety, but simultaneously rewards Latin American parents for risking their kids on an illegal border crossing—and has for years. The obvious culprit: the Treason Lobby, whose greed and recklessness created an enormous moral hazard that Obama’s recent border dissolution has now made undeniable. But don’t forget the Latino (“Hispanic family values”) parents. Many are already here illegally and paid to have their kids smuggled in. They should be tracked down and deported—with their children—as the best form of family reunification

American kids weren’t always so protected. From David Frum’s book about the 1970s:

If pre-1965 Americans hesitated to seem sensitive to comfort, they positively disdained safety. They lit rockets in their backyards on the Fourth of July. They bought their steak marbled with fat. They smoked. They bought cars without seatbelts. They gave boys .22-caliber rifles for their eleventh birthdays. How they would gape and stare at a contemporary playground, with its rubber matting underneath the swings, safety belts on the teetertotters, and three-year-olds strapped into crash helmets before they can mount their tricycles.

Lenore Skenazy has been pushing back against this. She has a book calledFree-Range Kids, How to Raise Safe, Self-Reliant Children (Without Going Nuts with Worry) and her website, FreeRangeKids.com, has many stories about the crazy things Americans do preserve kids from largely imaginary harms and the constant overreaction of police and school authorities to things like kids walking to school.

A week ago, a woman was charged with leaving her child in the car while she went into a store. Her 11-year-old child. This week, a woman was arrested for allowing her 9-year-old daughter to go to the park alone.

Which raises just one question: America, what the heck is wrong with you?

Compare that with what Mexican and Central American parents have been doing to their little ones for years. While your school-age children have to hold your hand while crossing a quiet suburban street with a green light, the little girl in this famous sign is being dragged across a highway so fast that her pigtails are flying. 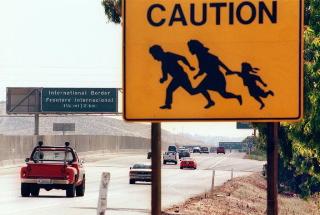 In fact, that sign was created in response to over a hundred deaths caused by illegal aliens crossing interstate highways near the border:

Parents were killed in front of their children, children in front of parents. Drivers who hit these people were left emotionally wrecked. One was haunted by the sight of an anguished face flying across the windshield….Before [Caltrans graphic artist] Hood began drawing the sign, he and his supervisors met with Highway Patrol officers and saw photos of accident scenes. What got to him most were the deaths that involved families.

"Graphically, I wanted to show a family," said Hood, who lives in San Diego. He chose to include a pigtailed girl, rather than a boy, because "there is something about a little girl running across with her parents that we are more affected by."

American children must have a car seat or seatbelt, and failure to use them will result not only in tickets, but in Child Protective Services being called and the parent arrested. But illegals are bringing their children in the back of tractor-trailers, inside the trunks of cars and in light trucks, vans and SUVs with up to 21 passengers [Juarez boy among thousands of Mexican children smuggled into U.S.,By Lorena Figueroa, El Paso Times, December 23, 2013]

In a 2003 (!) post on the moral hazard of not enforcing immigration law, I noted that 18 illegal aliens had lost their lives when their smuggler drove off and left them locked in a trailer compartment in the Texas heat. One was five years old or possibly seven. [Trapped in Heat in Texas Truck, 18 People Die, By Simon Romero and David Barboza, NYT, May 15, 2003]

The driver who abandoned the illegals—a Jamaican immigrant himself—was sentenced to life in prison. But what about the parents who put the child in that trailer? Shouldn’t they have been charged, supposing they survived?

What about the “Unaccompanied” part of “Unaccompanied minors”? It’s much harder for parents to send their kids anywhere now—paranoia makes Amtrak and the airlines unwilling to take the responsibility

Lenore Skenazy recently reported on a woman who wanted to send her son to Florida to visit his grandmother but found that Amtrak wouldn’t take him:

Until three years ago she could have simply put him on an Amtrak train. Children as young as 8 could ride as unaccompanied minors. But then Amtrak suddenly changed its policy and now kids have to be 13 to ride alone! [Mom Hires Craigslist Driver for 9-Year-Old Son, Gets Thrown in Jail, Reason.com, June 18, 2014]

She tried to hire a driver and called the cops on her—he apparently felt that she was endangering the kid, and he might not want to be found driving a small child around himself, in a paranoid world.

Greyhound has a whole 8-point procedure for unaccompanied minors, and if Grandma shows up without photo ID, they’ll turn the kid over to Child Protective Services instead. And if you’re in Illinois, no one under 17 can ride unaccompanied on Greyhound at all. (State law.) [Greyhound.com | Children Traveling]

But that’s only if you’re an American—if you’re a Central American, you can send your child alone through Mexico, and have him, or worse her, riding on top of a train: 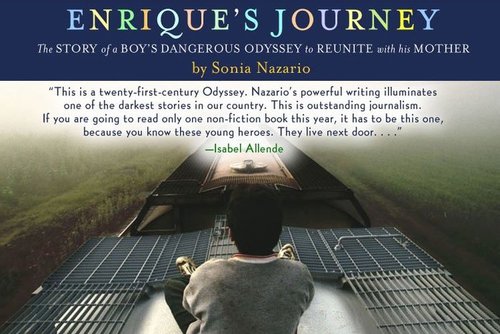 This from Sonia Nazario’s 2006 book Enrique's Journey, based on aPulitzer Prize-winning (of course) series in the Los Angeles Times, nowused as pro-immigrant propaganda in American schools. 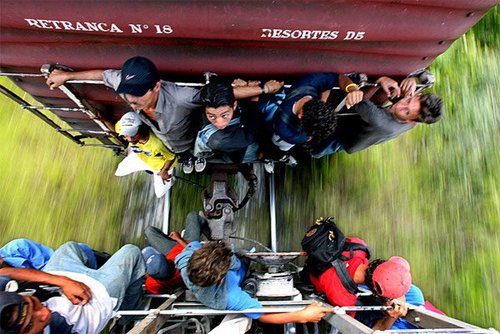 Do you see any of these “children” wearing helmets? Kneepads? Safety goggles?

And they do indeed die from this—which is why the major train line through Mexico that they ride is known as the “Train Of Death”.

One of things that makes for restrictions on the freedom of American kids is a paranoid fear of child molesters and abductors. Kids can’t go on sleepovers because of fear of a possible molester in the house.

But what about the Central American parents who are sending their kids, from 5 years old up, on sleepovers through Mexico and across the border?

In 1993 (!!), VDARE.com Editor Peter Brimelow went to the border to do research for his book Alien Nation. What he found there was child endangerment. As he stood with his Border Patrol guide by a mobile infrared scanner,

"One went into the bushes to your left," I suddenly heard him say. "Looks like he's got a child with him, he's dragging it by the hand.”…

At that point on the border the Tijuana River, through which that father must have dragged his child, is filled with raw sewage (Mexican sewage, although it then flows through U.S. territory).

And the entire no-man's-land is infested with bandits preying on the illegals. When we had arrived at the celebrated Smuggler's Canyon after nightfall, my guide [an armed Border Patrol agent] had flatly refused to go up into it on the grounds that it was now too dangerous. (The novelist Joseph Wambaugh wrote a powerful 1984 true-crime bestseller, Lines and Shadows, about a San Diego Police Department undercover squad's heroic but ultimately vain effort to control this nightly carnage in the late 1970s. And traffic then was a fraction of what it is today.)

My young guide, in general remarkably cheerful about the Border Patrol's thankless task, said it was the illegals' children that he found the most distressing, too. Particularly when the Border Patrol got there too late and found that the bandits had already managed to steal them.

Steal them? I said stupidly.

"They sell them to child-prostitution rings."

To adapt the question Megan McArdle raised above: Central America, what the heck is wrong with you?

The answer seems to be “Greed.”

The whole thing is another case of the “soft bigotry of low expectations”—America is allowing Hispanics to get away with incredible amounts of child endangerment and exploitation, because it’s their “culture.”