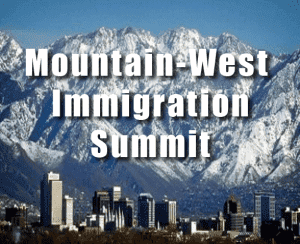 I have not laughed so much since American Renaissance-suppressing Charlotte Mayor Patrick D Cannon was indicted for corruption earlier this year:  Prosecutor: 2 ex-Utah attorneys general arrested Politico/AP 7/15/14

John Swallow, 51, and Mark Shurtleff, 56, were arrested at their homes Tuesday morning…

Shurtleff… is Utah’s longest-serving attorney general. He left the office in early 2013, but allegations of corruption followed him.

Shurtleff came to VDARE.com’s attention because of the extraordinary enthusiasm with which he used his office to promote Amnesty as I noted in Utah Attorney General Shurtleff Hosts Treason Lobby Klavern

“The party has lost those [Latino] voters,” Shurtleff said. “They aren’t in danger — we’ve lost them.”

and notes he called for

“neighboring states to pass laws similar to ours.” This refers to Utah’s HR116, a brazen attempt to alter federal immigration law by establishing a state guest worker program.

Also speaking at the Great Hall Fox-Fest was a local Gringo Collaborator, Utah Attorney General Mark Shurtleff. The state's highest law enforcement official delivered, with tears in his eyes, a gushing eulogy to Fox, Mexico in general, and Mexican immigrants in Utah, of whom he said

For years, Shurtleff has supported amnesty, opposed English-only legislation and has been known to break Utah's Official English law by speaking in an official capacity in Spanish. [Shurtleff and Latinos Share a 'Pretend' Meeting, March 10, 200, By Frank Curreri, The Salt Lake Tribune]

Vicente Fox is so pleased with Shurtleff that he is planning to award the Utah Attorney General with the 'Aguila Azteca', Mexico's highest award for foreigners

At the time I presumed Shurtleff’s treason stemmed from the Mormon Establishment’s deplorable immigration enthusiasm.

But now when his behavior turns out to be so plausibly influenced by money as to warrant a corruption indictment I wonder if he was doing a Gingrich. VDARE.com readers know that Newt Gingrich’s curious Hispandering documented in Newt Gingrich: The Aspiring Americano President turned out to be rooted in Sheldon Adelson’s money.

As Congresscritter Yarmuth has memorably said

all the money is on the side of pushing

Amnesty. Anyone wondering at the GOP Leadership’s inaction needs to realize this. Earlier this year there was some sign that the Establishment Immigration Restraint outfits were annoyed enough to go public on this crucial issue, but they seem to have subsequently wimped out