Reading the press accounts, you would think that a free ride home (courtesy of the American taxpayer) was the most horrible punishment ever for invasive foreigners.

The particular deportees in this case are the ones who have spawned anchor babies, possilby to assure future US citizenship when the kiddies arrive at maturity and can sponsor mom & dad as legal immigrants. Illegal alien job thieves like to complain that having jackpot kids entitles them to stay, as if procreation trumped law and sovereignty.

(The rat-sign in the photo below should read, “WHOM would Jesus deport?”) 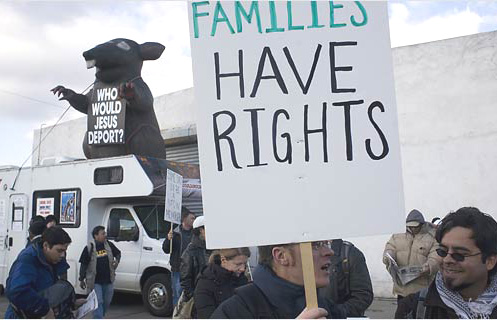 And illegals do purposefully enter the U.S. in order to plop out an anchor kid, as the video below illustrates.

Anyway, readers are supposed to be shocked that deportations of parents occurs, while nobody cares about the 1.7 million children of incarcerated persons in the United States who suffer similar separation anxiety.

Some families follow the deportee to his/her home nation to keep everyone together. Fox-Latino spotlighted such a case when Jennifer Hernandez and kids announced their move to Mexico: US Woman Will Join Deported Husband in Mexico. According to recent reports, Mexico is becoming a middle-class country, so it’s not like they’re going to some backward place like Timbuktu.

Others remain in the US for the free stuff and other reasons.

From the psychological viewpoint, family togetherness is very valuable indeed. Intact families tend to raise fewer little delinquents who grow up into a career in crime.

Now for the sniffly dinosaur media narrative, where the few sensible remarks occur at he very end:

During the first six months of last year, the federal government deported more than 46,000 parents who claimed their children are U.S. citizens, according to a new report that has raised concerns about what happens to children after their parents are expelled.

An additional 21,860 parents of U.S.-citizen children were ordered out of the country but may not have left, according to the Immigration and Customs Enforcement report to Congress last week.

The report, which reflects statistics from January through June 2011, is the first time the government has released detailed information on the number of parents of U.S.-citizen children who have been deported. The agency was directed by Congress in 2010 to begin collecting the data.

Department of Homeland Security Secretary Janet Napolitano said Wednesday that she was concerned about U.S.-citizen children whose parents have been deported. But she said the government has increased its emphasis on deporting immigrants with criminal convictions, and the majority of the parents’ deportations fell into that category.

“The No. 1 concern all of us should have is, ‘Where are the children? What’s going on with the children?’ “Napolitano said during a meeting with reporters and editors at The Arizona Republic. “But the plain fact of the matter is having a child in and of itself does not bestow citizenship.”

A 2009 report by the Department of Homeland Security’s Inspector General estimated that more than 100,000 parents of U.S.-born children had been deported between 1998 and 2007.

The large number of parental deportations alarmed some members of Congress and immigrant advocates, prompting officials in President Obama’s administration to point out that the removals took place before a new policy took effect in the second half of last year. That policy directs ICE agents and prosecutors to focus more attention on deporting dangerous criminals and use discretion to allow some illegal immigrants, including those with U.S.-citizen children, to stay in the country if they have not committed crimes.

However, immigration-enforcement advocates said the report was intended to create support for Obama’s goal of allowing illegal immigrants to remain in the U.S. and eventually gain legal status by generating sympathy for their children.

ICE statistics show that 74% of the 46,486 parents of U.S.-citizen children deported had been convicted of crimes. Another 13% had been previously removed from the country, and 4% were fugitives — immigrants who failed to comply with deportation orders.

“We made a big point of putting some real law-enforcement priorities into ICE so that their focus is on those with criminal convictions, repeat offenders, fugitives and those we pick up right at the border before they’ve had an opportunity to get into the interior of the country,” Napolitano said.

The report could increase concerns among some politically important Latino voters over the record numbers of deportations that have taken place under Obama and his failure to deliver comprehensive immigration reform, including a legalization program for millions of illegal immigrants.

Members of the Congressional Hispanic Caucus condemned the deportations, saying they are tearing families apart.

“This report is the latest example of the terrible toll our broken immigration system is taking on families,” Rep. Lucille Roybal-Allard, D-Calif., said in a prepared statement. She requested the report. “We can’t continue to claim to value families while deporting parents in the tens of thousands.”

Roybal-Allard cited a 2011 report by the Applied Research Center, a liberal organization, that said 5,100 children in the U.S. were living in foster care after their parents were deported.

Laura Vazquez, immigration legislative analyst at the National Council of La Raza, a Latino and immigrant advocacy group in Washington, said ICE should not be deporting parents convicted of minor crimes.

ICE did not provide a breakdown of the types of crimes committed by the deported parents of U.S.-citizen children.

An analysis of the statistics shows that the 46,486 parents of U.S.-citizen children deported during the first six months of 2011 represented 22% of the overall 211,167 people ICE deported during that time period.

Gerald Burns, a Chandler, Ariz., immigration lawyer who is president of the Arizona chapter of the American Immigration Lawyers Association, said he agreed the government should be deporting immigrants who have committed violent crimes, regardless of whether they have U.S.-citizen children. But he said the majority of the cases he sees in court involve parents convicted of minor crimes, including using false papers to work.

He said the majority of U.S.-citizen children whose parents are deported remain in the U.S. with other relatives or leave the country with their parents.

When parent breadwinners are deported, it it puts an added strain on those left behind, and in some “extreme cases,” the children wind up in foster care, he said..

“When you take children away from parents, of course there is an effect on their development and on their mental health,” Burns said.

What’s more, older siblings often must step in to care for younger children when a parent is deported, limiting their own opportunities to succeed, Burns said.

Mark Krikorian, executive director of the Center for Immigration Studies, a Washington, research organization that favors tougher immigration policies, said the deportation of large numbers of parents of U.S. citizen children is the result of the government’s past failure to adequately enforce immigration laws.

The report showed the longer illegal immigrants are allowed to stay, the more likely they are to have children born in this country, he said.

“If we had been more conscientious about deporting them earlier, then a lot of (the children) would have been born in Mexico” not the U.S., Krikorian said.

Krikorian said he considers the report a political ploy aimed at gaining support for Obama’s efforts to let more illegal immigrants remain in the United States through his new deportation policy in the short term and eventually through immigration reforms that would allow illegal immigrants to gain legal status.

“He is trying to create support for his administrative amnesty where parents of U.S. kids are allowed to stay,” Krikorian said.