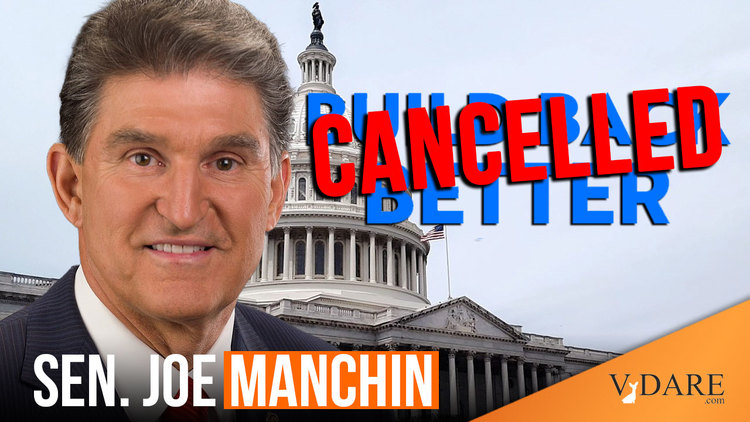 Coming from a West Virginian, Sen. Joe Manchin’s Christmas gift to his fellow Democrats was appropriate: a lump of coal. His announcement that he opposes the Build Back Better budget bill is likely the end for the Biden Regime’s main legislative initiative [Manchin on Biden's spending bill: 'No negotiation going on', by Burgess Everett, Politico,  January 4, 2022]. And it also may end Amnesty/ Immigration surge in this 117th Congress. Biden could attempt something through executive action, but he can’t expect Congress to send him anything anytime soon. In other words, Manchin handed the GOP a victory.

Of course, Biden and the Democrats insist the bill not dead. But if Democrats try again, they need support from Manchin and other moderates. And Manchin has been very clear: Parliamentarian Elizabeth MacDonough must approve any such bill with an immigration provision, and she’s already ruled, repeatedly, that Amnesty cannot be included

Democrats threaten to override her ruling, but that risks losing Manchin’s vote again. [Manchin Says He Wouldn't Defy Parliamentarian on Immigration, The Associated Press, December 9, 2021]. It’s most likely posturing for the party’s hard-Left base.

Manchin’s decision outraged Leftists, which means they’re less likely to further accommodate his budget demands. They also insist that Amnesty must be in the bill, even though its inclusion would doom it. Moderates see the polls and know their reelection chances depend on distancing themselves from Open-Borders extremists. Only 41 percent of those polled backed the bill; support among independents is lukewarm at best [Democrats are struggling to sell Biden's agenda., by Kelsey Snell and Barbara Sprunt, NPR, December 10, 2021].

Democrats could write a stand-alone immigration Amnesty, but prior attempts this congressional term have failed. Consider the party’s “comprehensive” Amnesty from early this year. It offered all illegal aliens a pathway to citizenship with no provision to secure the border or strengthen immigration enforcement. Unsurprisingly, not a single Republican dared support it. That bill was DOA. Without GOP support, Democrats could not override the expected filibuster[Manchin: 'Heavy lift' to change the filibuster through nuclear option, by Jordain Carney, The Hill, January 4, 2022].

Democrats later split that comprehensive bill into two parts. One aimed at legalizing illegal aliens who crossed the border as kids “through no fault of their own”—so-called Dreamers recipients of Deferred Action for Childhood Arrivals—and the other legalized illegal agricultural workers. Both bills passed the House with some Republican support. Nine Republicans backed the Dreamer Amnesty and thirty voted for the farm Amnesty.

But both bills stalled in the Senate. The vast majority of Senate Republicans aren’t eager to back any Amnesty.

Democrats and cucky Republicans can’t reach an agreement to sell out America for myriad reasons. Democrats Leftists now control the party’s immigration proposals. Moderates such as Senator Kyrsten Sinema weren’t thrilled with the Build Back Better bill’s price tag, but were still fine with its immigration provisions—so long as MacDonough OK’d them [Sen. Kyrsten Sinema supports adding immigration policies to spending bill, KTAR, November 11, 2021]. Progressives understand that, and so don’t fear moving the party to the extreme Left on immigration. They simply denounce opponents of Open Borders as racist and xenophobic.

That’s why Democrats no longer bother to offer any bones to squishy Republicans and why the grand Amnesty carried no enforcement mechanisms. The thought of any border security or immigration enforcement upsets their activist base. It’s also why Democrats demanded America open its borders to thousands of Haitian illegals this fall. Being the Open Borders Party, they’d rather sing “Foreigners Uber Alles” than pass legislation.

But as Democrats have grown more extreme, Republicans have become more sensible. Republicans no longer argue for Amnesty to win the Hispanic vote. Indeed, Republicans fear uttering anything pro-Amnesty. The only real GOP Amnesty effort was Cornyn’s quickly-squashed Dreamer bill and the thirty or so House Republicans who voted for the two Amnesty bills.

The surge in illegal immigration doesn’t just affect border towns. Usually they’re just passing thru. The cartels control where they end up — in places like MO.

It’s unlikely that even squishy Republicans will spoil the midterm momentum by cutting a deal with the Democrats to sell out GOP voters. They know voters want border security and greater immigration enforcement, not Amnesty. They know they risk losing the 2022 midterms if they alienate the base. Thus, they have no incentive to cut a deal with Democrats.

Thus, the only hope for Amnesty lies in executive fiat. The Biden Regime effectively granted legalization to nearly all illegal aliens when the Department of Homeland Security, led by Cuban-Jewish visa fraudster Alejandro Mayorkas, announced earlier this year it would only deport illegals convicted of “serious crimes.” Illegals who did not commit “serious crimes” can stay, which turns America into an illegal-alien sanctuary. The Administration also rewards illegals who cross the border with lenient treatment and free flights around the country. An argument could be made that Amnesty exists in all but name.

But this isn’t good enough for the Treason Lobby. They want the Amnesty formalized by law.

Biden could issue an Executive order like Barack Obama did with Deferred Action for Childhood Arrivals and tried to do for parents of “Dreamers” in the DACA-like Deferred Action for Parents of Americans and Lawful Permanent Residents, or DAPA. The U.S. Supreme Court vote on the measure was a tie, which let stand a lower appeals court ruling that overturned it [Supreme Court Tie Blocks Obama Immigration Plan, by Adam Liptak and Michael D. Shear, The New York Times, June 23, 2016].

But that precedent likely won’t dissuade Biden from trying again. He extended the eviction moratorium last summer despite admitting it was unconstitutional. And, indeed, the U.S. Supreme Court did eventually strike it down [The Supreme Court Will Allow Evictions To Resume. It Could Affect Millions Of Tenants, NPR, August 26, 2021].

So if the Democrats give up on Build Back Better for good, we should expect:

The good news: the Republicans are using lawfare to stop this sort of thing. Brandon’s deportation moratorium was overturned and the Remain in Mexico policy was restored thanks to lawsuits filed by Texas Attorney General Ken Paxton and other GOP AGs.

Paxton and his allies are guaranteed to sue over any Amnesty Biden tries. And chances are, they’ll win. SCOTUS now has a modestly conservative bent.

Democrats still hope the 2022 midterms will fortify their majority or at least maintain it. Considering the polls, that sounds far-fetched. A midterms disaster could mean the party must wait until after the 2024 Presidential election to try Amnesty again. If an immigration patriot moves into 1600 Pennsylvania Avenue, then it may be a very long time until Amnesty is ever brought up again.

So the defeat of Build Back Better may put down Amnesty for now. But this shortcoming won’t dissuade Treason Lobby Democrats from continuing to pursue it. They know the deathblow to the Historic American Nation would be the legalization of millions of illegals. Democrats will never give up this dream.

Otherwise they would have to wait for generations—and rely on the GOP being too cowardly and stupid to abolish Birthright Citizenship).

That means the GOP can’t, either.