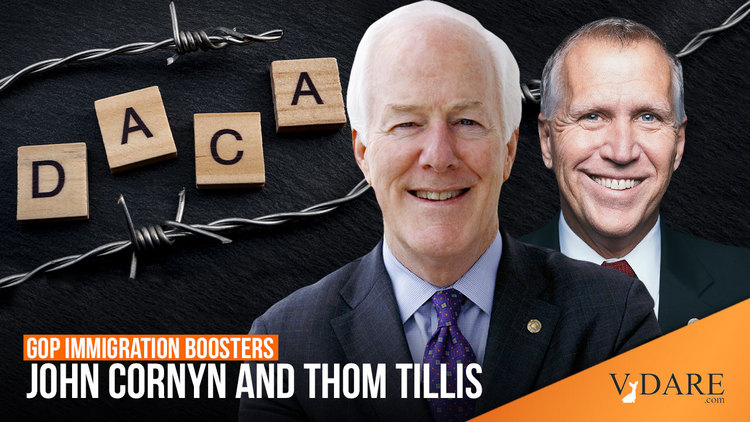 GOP Treachery On Immigration Falls Flat—And Donors Are Not Happy

Some Republicans won’t give up the dream of Amnesty, but their efforts continue to fail. Last week, immigration boosters John Cornyn and Thom Tillis proposed an Amnesty bill that would permanently legalize illegal aliens who “actively participate” in the Deferred Action on Childhood Arrivals (DACA) program. This would give fewer than 700,000 illegals a pathway to citizenship. This is a narrower Amnesty than the Dreamer bill that passed the House in the spring, which would legalize all illegal aliens who came to the U.S. as minors. This bill would only give a pathway to citizenship to those who are currently enrolled in DACA [Republican immigration proposal falls flat, by Rebecca Beitsch and Rafael Bernal, The Hill, July 10, 2021].

The plan was attacked by both the Left and the Right. Liberal immigration boosters claim the bill is meant to derail a bigger Amnesty for partisan gain. The Federation for American Immigration Reform called it a “pointless, poorly timed” Amnesty. The Hill reported that the bill is effectively DOA, but did say it could possibly be revived if all other efforts fail.

This is another example of squishy Republicans failing to advance their terrible immigration priorities—and it’s making the donors seethe. Politico reported that donors continue to push Republicans to pass Amnesty but lawmakers are giving them a cold shoulder.

GOP figures speaking out include board members of the American Business Immigration Coalition (ABIC), who have spoken to 41 Republican senators about the bills. Some who describe themselves as lifelong Republicans say they may start voting across party lines if they don’t see the party bend on immigration. Two Republicans who spoke to us threatened to withhold financial support: Cuban-American billionaire Mike Fernandez, a former Republican turned independent who's previously donated millions to GOP candidates, and Bob Worsley, a former GOP State Senator in Arizona.

“The people who have been there on the issue for a long time, like Lindsey Graham, are nowhere to be found at the moment,” said John Rowe, Exelon Chairman emeritus and national GOP bundler. “He doesn't particularly want to talk to me at the moment. And that of course is frustrating because I've supported him for a very long time.” [GOP donors push senators on immigration, by Olivia Beavers, Politico, July 12, 2021].

This lack of action is prompting some donors to turn to the Democrats. But all this cajolery seems to have no persuading effect, even on well-known immigration boosters like Lindsey Graham.

It’s a good sign that the party seems to care more about their voters than the donors—for now, at least.