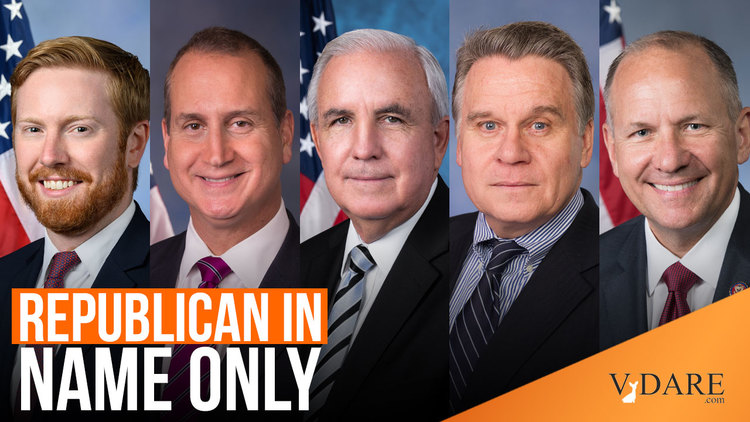 The Traitorous Republicans Who Back Amnesty In 2021

Previously: Biden’s Great Replacement Acceleration Act May Be DOA, But GOP Needs A Leader To Defend The Historic American Nation

The House passed  two amnesty bills Thursday with the support of several Republicans. Nine Republicans backed the Promise and Dream Act, which would permanently legalize illegal aliens who came to the U.S. minors. Thirty Republicans voted for the Farm Workforce Modernization Act, which gives millions of illegal farmworkers a path to citizenship—so long as they submit to being indentured servants for a few years.

These bills may be more limited than Joe Biden’s massive amnesty, but that doesn’t make them any less hazardous to the nation. Not a single Republican should’ve even considered these bills. Here are the traitors who sold out their own constituents for the sake of the cheap labor lobby:

The Promise And Dream Act Republicans:

Most of these traitors represent safe red districts and deserve a primary. Many of them also voted to impeach Donald Trump. One of the Republicans who satisfies both categories is Michigan Rep. Peter Meijer, who posted a video on Twitter celebrating his vote for the Big Ag amnesty. He claims “farmers” need the amnesty to find workers in a time of high unemployment. Maybe they should hire unemployed Americans, instead?

Tonight I was one of 30 Republicans to vote yes ✅ on HR 1603, Farm Workforce Modernization Act. Workforce shortages are a huge challenge for #MI03 farmers & have led to job losses for US citizens. Even in a pandemic w/ high unemployment, farmers still can’t find labor they need. pic.twitter.com/8pXb2Ec2KV

On top of these votes, some prominent Republicans are proposing amnesties of their own. South Carolina Sen. Lindsey Graham and nine House Republicans introduced their own amnesty that would give work permits to pretty much all illegals [Lindsey Graham, House Republicans Promote Amnesty for Illegal Aliens Amid Border Crisis, by John Binder, Breitbart, March 17, 2021]. Florida Sen. Rick Scott is talking up a Dreamer “compromise” bill that would legalize illegals who came to the U.S. as minors in exchange for basic immigration enforcement [Rick Scott’s Amnesty Could Put 1.5M Illegals on Track for U.S. Citizenship, by John Binder, Breitbart, March 17, 2021].

The GOP is the stupid party for a reason. All of these ideas look hopeless in the Senate, but it’s not guaranteed they will die in the upper chamber. If the GOP wishes to stop being the stupid party, then Republican senators must save their colleagues from their massive delusions. They must kill these bills as soon as they enter the Senate.