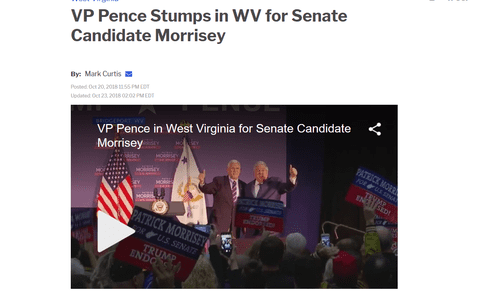 Senator Joe Manchin is hardly an immigration patriot. He has a C from Numbers USA. However, this is as good as it gets for the Democrats. He has the highest grade for any Democrat on Capitol Hill.

He also voted to confirm Justice Kavanaugh, which led to a condemnation from the increasingly extreme Democrat base. Not surprisingly, he's suffering a bit of a squeeze in West Virginia, as challenger and WV Attorney General Patrick Morrisey is gaining ground. A new poll (paid for by the GOP) even shows Morrisey in the lead.

Take Hollen out of the equation, and Morrisey leads Manchin 47 percent to 45 percent, with 8 percent undecided.

For what it's worth, it's likely that Manchin is still in the lead and will probably win re-election. More objective polls show Manchin with a sizable lead. However, this is now at least a competitive race. Thus, if Manchin does win, Republicans should look at how they failed to pick up a Senate seat against a very unpopular incumbent.

One key is that Manchin has been slamming Morrisey's past as a lobbyist, as an out-of-stater, and as an opponent of expanded health care coverage. In other words, Manchin is running a populist campaign, even as an incumbent.

Republicans, including Vice President Mike Pence, are trying to counter this by attacking on immigration. The VP made it a staple during his recent visit to campaign for Morrisey.

The biggest applause of the night went for immigration reform and the performance of the U.S. economy. Pence says he needs Patrick Morrisey to help on those issues in the U.S. Senate.

The takeaway of the WV Senate race is that whoever is more "populist" is probably going to win. Manchin is hated by the state's small but vocal progressive activists concentrated in the college towns. But union Democrats, still a force in West Virginia, like him. And progressives are so desperate to stop President Trump that they'll vote for Manchin regardless of how much they hate him.

Morissey could be characterized as a "true conservative" type in the mold of Ted Cruz during the 2016 presidential campaign. However, West Virginians aren't looking for slogans about limited government or tax cuts. Immigration is a start, but if Manchin wins re-election even in this reddest of red states in the heart of Trump Country, Republicans really need to start re-examining how they talk about economic issues.