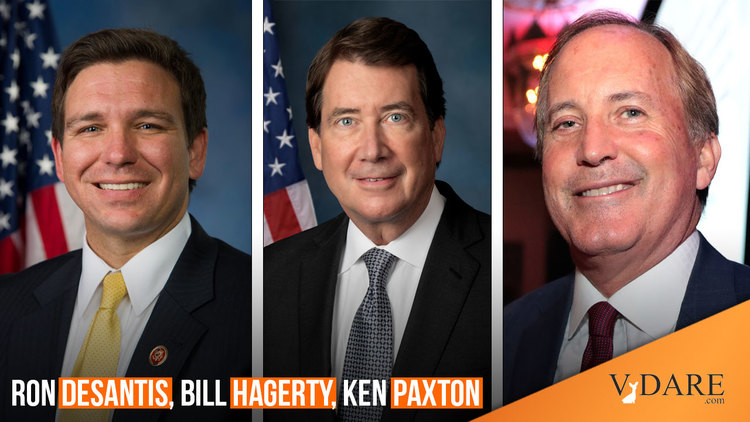 Democrats are pushing ahead with their quest to destroy the Historic American Nation. Joe Biden shreds sensible border-control policies, imports tens of thousands of illegal aliens, then permits them to roam free. Meanwhile, Congressional Democrats want to boost legal immigration and legalize millions of illegals with the Build Back Better budget bill. Republicans have done too little to fight back, but at least three are challenging this seemingly inevitable victory for the Treason Lobby.

The Florida governor has declared war on the Biden Regime because it has sent more than 70 flights filled with illegals from the border to Jacksonville since the summer. Florida officials claim each flight carries 36 illegals. The feds refuse to tell state authorities anything about the flights, including who’s on board and who’s running the operation. Florida officials don’t even know why Jacksonville is the chosen destination for the flights [Biden sent 70 secret night flights of migrants from border to Florida, by Anna Giaritelli, Washington Examiner, November 06, 2021].

The consequences have already proven deadly. A 24-year-old illegal Honduran was arrested earlier this month for murder in Jacksonville. The migrant, Yery Noel Medina Ulloa, claimed to be a minor when detained at the border, and of course he was flown to Florida. Police allege that he murdered the kind man who took him in [Illegal immigrant who posed as teen arraigned in Florida murder, by Jorge Fitz-Gibbon, New York Post, November 4, 2021].

DeSantis blamed Biden for the murder and announced that he would look at all ways to respond to this invasion. He admits the state’s options are limited because the feds control airspace and immigration. But he says the federal government is failing to uphold its responsibilities, which DeSantis says might mean “the state should be able to come in and provide protections, and so that’s what we’re going to be looking to do.” The governor suggested that Florida might bus the unwanted illegals to Biden’s home state of Delaware if they keep coming [‘Send them to Delaware’: DeSantis threatens action over secret migrant flights, by Haley Brown, New York Post, November 10, 2021].

He also says the state might cancel its contracts with those involved in the flights. “I think that they use these private contractors,” he told Tucker Carlson:

So what we're looking at is how can we fight back against the contractors? We can obviously deny them state contracts, which we will do. Can we deny them access to Florida’s market generally? Can we tax them? Can we do things to provide disincentives so they can't do it? So we’re going to do whatever we can to do it. … But we are going to go after some of these contractors because they are bringing in people that are causing burdens on us and, as we've said, tragically caused someone to lose their life.

DeSantis is doing what a governor should do. Rather than impotently whine and say he can’t do anything, he’s looking at creative solutions to stop the flights. He’s also hammering the subject in the national press to put the heat on Biden. All DeSantis needs to do now is to carry out his threats and make the Biden administration cease these flights.

The Tennessee senator was thought to be a standard establishmentarian when he entered office. But he has emerged as one of the few Republicans in the Senate to focus on immigration. It’s one of his central issues, most likely because he packed his staff with Trump Administration alumni [GOP senator stocks office with 13 former Trump staffers, by Daniel Lippman, Politico, January 28, 2021].

Most Republicans will complain about Biden’s open borders policies. But Hagerty does more. He sends letters and recommends specific policy changes. So, like DeSantis, he isn’t just complaining to put on a show.

His recent letter to Sen. Bernie Sanders over the disastrous budget plan is another hard-hitting defense of the American working man. Many Republicans have called attention to the Democrats’ numerous attempts to insert an Amnesty; hardly any have called attention to the legal immigration increases. Except Hagerty. He observed that the bill will give Big Tech an unlimited supply of cheap foreign labor to replace American workers. He explained it perfectly to Fox News’ Laura Ingraham:

What it does to the American worker is set them back for a generation to come while Big Tech billionaires are smiling all the way to the bank. It gives a 10-year hiatus on the caps on green cards, basically unlimited green cards, which mean permanent residence for foreign workers right here in America. These Big Tech companies can hire as many foreign workers as they want. They don’t have to worry about discriminating against American workers... they can do it all day long. Just last week, Facebook actually had to settle a multi-billion-dollar suit for discriminating against American workers in favor of foreign workers. This provision basically allows that to happen all day long.

His letter concluded with an appeal to Sanders to stand up against the greed of billionaires and take the side of the American workers denied a ticket to the working class. It was an economic argument against mass legal immigration we rarely hear from elected Republicans.

Hagerty should go a step further and back legislation to curb legal immigration. Beside that, Hagerty is showing how his GOP colleagues should respond to the lawless Biden regime.

The Lone Star attorney general arguably is the most effective elected Republican who opposes Haiti Joe’s immigration madness. Paxton shows the power of lawfare and how it can reverse the president’s worst policy decisions.

Last month, Paxton sued because the regime won’t build the border wall, despite federal money set aside to do so. Paxton argues that this refusal violates the law. That case is pending [Texas Attorney General Ken Paxton sues Biden administration in bid to force construction of U.S.-Mexico border wall, by Uriel Garcia, Texas Tribune, October 21, 2021].

In other words, the Texas attorney general knows lawfare works, even against leftists. He should sue over every single one of Biden’s destructive policies.

Paxton’s superior, Texas Gov. Greg Abbott, suggested another good countermeasure but didn’t follow through. In September, Abbott said he would use the Texas National Guard and state law enforcement to close ports of entry. But he backed away from this pledge because he feared usurping federal authority. Considering federal authorities refuse to protect the border, Abbott should use his own forces to do so. He and other state governors must challenge the Biden Regime’s treason. If the feds won’t do it, why can’t the states? Let the U.S. Supreme Court decide.

DeSantis, Hagerty, and Paxton all show the GOP what it must do to answer Biden. And as the 2022 midterms approach, it will be clearer that the trio’s focus is the path to victory.

They aren’t merely rehashing talking points about the border. They’re changing the debate and pushing effective border policies. If more Republicans joined them, they could hamstring Biden and the Democrats and diminish their power to destroy the Historic American Nation.