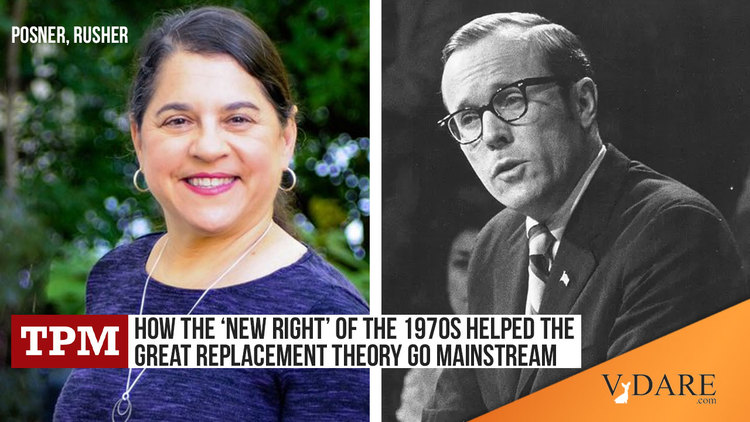 A paranoid piece by Sarah Posner [Tweet her] in Talking Points Memo argues the late Bill Rusher and moi ("a highly visible figure during Trump’s 2016 primary and general election run" LOL) invented the Great Replacement Theory in 1970s and thus are to blame for the 2022 Buffalo shooter, along with the GOP generally.

My latest @TPM: How The ‘New Right’ Of The 1970s Helped The Great Replacement Theory Go Mainstream https://t.co/9QoRPoc9G8

Is the Left planning a purge?

I miss Bill Rusher! William F. Buckley was not really the "Father Of American Conservatism" but Rusher, who died in 2011, was certainly its nursemaid. I paid tribute to him here.

Of course Posner doesn't say that the "alt-right event at the Willard Hotel" where she met me had been Cancelled from the National Press Club's ludicrously misnamed "Free Speech Room"—this even before Trump's election! Land Of The Free!

My speech is here.

And of course Posner clutches pearls over The Camp Of The Saints. VDARE.com bought up all remaining English-language copies, They're now available here.

Sarah Posner, by the way, is the sole source of the "accusation" that Steve Bannon said of Breitbart.com that "We're the platform for the alt-right." See Fake News: How Many Historic Quotes Attributed To MSM Targets Were Just Made Up?