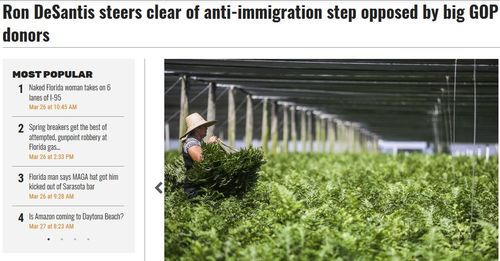 DeSantis Popular In Florida, But Still Hasn't Delivered On E-Verify

Governor Ron DeSantis's victory in Florida was one of the few bright spots in 2018. He came close to blowing it but ultimately defeated Andrew Gillum. By all accounts, he's off to a strong start as governor and is extremely popular among Florida voters. Needless to say, his performance will have an important impact on the 2020 presidential election in this crucial swing state.

That’s an improvement from an FAU poll released six weeks ago, when 48 percent of Florida voters approved and 18 percent disapproved of DeSantis’ performance, a net positive of 30 points.

The same poll shows plurality support for abolishing sanctuary cities, another one of those policies that was not implemented at the federal level when Republicans had the majority.

Gov. Ron DeSantis is pushing more Florida sheriffs to cooperate with the federal government to keep potentially deportable criminals behind bars until they’re handed off to immigration agents.

Following the governor’s lead, the state Senate is moving forward with a proposal that would require state and local law-enforcement agencies to “use best efforts to support the enforcement of federal immigration law.”

A Florida sheriff, who’s emerged as a national law-enforcement leader on immigration, is encouraging his county colleagues to adopt a newly hatched program that’s inexpensive, requires just hours of training and would satisfy the governor’s and Legislature’s goals.

The Senate measure (SB 168), which has become known as the sanctuary-city bill, is aimed at forcing local officials to honor requests from the federal government, known as “immigration detainers,” that ask law enforcement agencies to hold people believed to be “a removable alien under federal immigration law.”

The detainers, which have sparked legal challenges throughout the country, allow local officials to keep people for up to 48 hours after they would have otherwise been released. Critics maintain the detainers are unreliable and have resulted in the near-deportation of natural-born citizens.

Of course, one way to dodge that whole "natural-born citizens" problem would be to get rid of birthright citizenship. Say, didn't we elect someone president who promised to do something about that?

However, not everything is going well. Thus far, the governor has been unable to implement mandatory E-Verify (something else the federal government should have already taken care of by now.) The reason for Governor DeSantis's failure is unclear. He claims he still supports the measure and its just a question of getting it through the legislature. Critics suggest it is because of opposition to the policy by donors. (These may not be mutually contradictory; it's possible donor opposition is scaring enough Republicans that the governor can't get his policies through.)

A political shot Ron DeSantis fired at Republican primary opponent Adam Putnam in their Fox News debate last year now looks like its ricocheting back at the new governor.

With immigration a potent issue in his campaign against Putnam, DeSantis accused his rival of caving to powerful business and agriculture donors who opposed being required to use E-Verify, the federal database that checks whether new hires are legally eligible to work in this country.

“He won’t do that, because his Big Ag donors that fund his campaign want that cheap foreign labor,” DeSantis told the Fox TV audience in August.

DeSantis vowed, “I will sign E-Verify into law here in the state of Florida.”

But seven months later, DeSantis has done nothing publicly to support E-Verify legislation that is stalled in the House and Senate, with the governor now acknowledging it likely will go nowhere this year.

DeSantis bristled, though, when asked whether he was surrendering to special interests – just as he accused Putnam of doing.

“I’m supportive of E-Verify but we ... need to figure out a way to get it across the finish line,” DeSantis said, insisting, “It’s not any community winning out over me.”

But Florida business groups, including the Florida Chamber of Commerce, and farming interests, major contributors to the state Republican Party and individual lawmakers, remain opposed to the legislation making all employers use the federal database before putting anyone on the payroll.

It's too early to say what will happen. Yet this is simply the latest example of the problem that is crippling the GOP at the national level and has damaged the Trump Administration. Republican voters want immigration law enforcement. Republican donors want cheap labor, even though their scabs will vote to implement socialism in a few more election cycles.

Only one side can win this battle. Let's hope Governor DeSantis picks the right side. If he does, he may have a bright future in the post-Trump GOP.