Carlos Ramirez-Rosa Is Half Mexican, Half Puerto Rican—Perfect For The Latino Earmuffs District

The Chicago district represented  by Luis Gutierrez (he prefers Gutiérrez, which is typical) is famously weirdly shaped, and known  as the "Latino Earmuffs". It's actually two neighborhoods, a Puerto Rican neighborhood in the north, and Mexican one in the south. It's designed, by racial gerrymanderers to elect a generic Hispanic.

It was featured by The Economist as one of the most strangely drawn and gerrymandered congressional districts in the country[3] and has been nicknamed "earmuffs" due to its shape.[4] It was created to pack two majority Hispanic parts of Chicago into one district, thereby creating a majority Hispanic district.

This district covers two strips running east-west across the city of Chicago, Illinois, on the west side continuing into smaller portions of some suburban areas in Cook County, surrounding Illinois' 7th congressional district. The northern portion is largely Puerto Rican, while the southern portion is heavily Mexican-American. The two sections are on opposite sides of the city and are only connected by a piece of Interstate 294 to the west; the highway is in the district while the surrounding areas are not. It is the smallest congressional district in area outside New York City and San Francisco.[5]

So what we're seeing is that Mexicans and Puerto Ricans don't like each other, and don't want to live together, but they both want to vote for a left-wing Democrat.

Of course, they have different interests—Puerto Ricans are US citizens, and they're the very first victims of displacement by Mexican immigrants, who take the same kinds of jobs done by Puerto Ricans, but cheaper.  (See A Surging Mexican Population Creates New Rifts, Rivalries for Hispanic Groups By Eduardo Porter, The Wall Street Journal, August 7, 2001.) 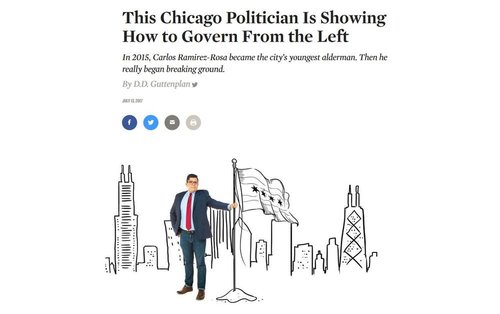 So who is going to represent this hybrid district, now that Luis Gutierrez is retiring?

Well, they managed to find a guy named Carlos Ramirez-Rosa who is. like his district, half-Mexican and half-Puerto Rican. Here's what the Nation has to say about him:

“I grew up in a very political household,” Ramirez-Rosa explains. “My father came from an area in Puerto Rico that was always the center of the independence movement. He grew up in dire poverty, and it was only because of [President Lyndon Johnson’s] Great Society that he was able to come to Chicago to study. My mother was the daughter of a Mexican coal-mine worker who brought his family to Chicago and got a job in a unionized steel mill.

“They came in at the sweet spot right before neoliberalism, where you still have the state playing a role in lifting people out of poverty. Also, you have the end of de jure racism: People like my parents—brown folks and black folks—were able to enter good-paying government jobs, institutions of higher education, and benefit from the social safety net and the hand up.”

Both of Ramirez-Rosa’s parents became bilingual educators. His mother, Margarita Ramirez-Rosa, told me she remembers taking Carlos along to the State Capitol in Springfield when he was 4 years old. “It was a four-and-a-half-hour bus ride. He asked why were we going, and I told him it was to get more money for the schools. Afterward he asked, ‘Where are we going now?’ I told him we were going home. He said, ‘But we didn’t get the money!’ Carlos has always had a conscience.”

This Chicago Politician Is Showing How to Govern From the Left In 2015, Carlos Ramirez-Rosa became the city’s youngest alderman. Then he really began breaking ground. By D.D. Guttenplan, The Nation, July 13, 2017

This is the kind of thing that makes Ann Coulter say  "Our new country's going to be great!"