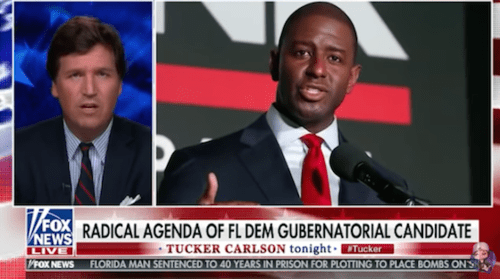 It’s surprising how little attention the Florida governor’s race has gotten from the press, given the importance of the state and the election’s issues there.

In the background, it’s disturbing to see how far left the Democrat Party has gone, and rapidly. Neophyte Alexandria Acacio-Cortez’s win in a Democratic primary against veteran Joe Crowley in New York was pretty shocking, given her extreme socialist views, but the district has become hispanic in recent years and the Democrats didn’t take the restaurant worker seriously.

In fact, the “Abolish ICE” open-borders movement has become remarkably mainstream in a short time, and it now includes well known Democrats like Senators Kamala Harris and Kirsten Gillibrand as well as an assortment of House members.

But even among the new pack of radicals, the extremism of Democrat gubernatorial candidate Andrew Gillum is noteworthy because of his support for ending borders and police.

The worst news is that  he presently polling as the future governor of Florida, described in Tucker Carlson’s report: 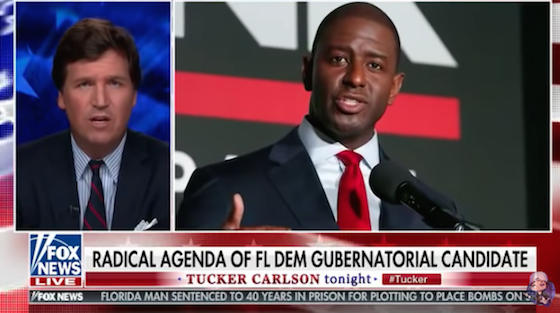 TUCKER CARLSON: Tonight we take a closer look at the gubernatorial candidate in Florida: he’s named Andrew Gillum. He’s the mayor of Tallahassee, and currently ahead in the polls, amazingly, and if elected, he has an agenda that Florida has never seen before.

So Florida has more than half a million illegal immigrants living within the state’s borders: his response to this is to describe immigration enforcement of any kind as immoral. He’s called for abolishing ICE for example. Watch:

CNN REPORTER: Ron DeSantis, the Republican nominee, had a statement last night about you, Andrew Gillum: he says you want to abolish ICE. You do, correct?

FLORIDA GOVERNOR CANDIDATE ANDREW GILLUM: We want to replace ICE with the Department of Justice entity that has not been tarnished in the same way.

CNN REPORTER: So again he says you want to abolish ICE — you say you want to replace it — that’s basically the same thing.

CARLSON: That’s basically the same thing and he’s not embarrassed about it, but why would he be? He also has long-standing ties with a group called the Dream Defenders; it’s a radical left-wing group based in the state of Florida. Dream Defenders have denounced the very existence of police and prisons and called for the elimination of national borders. They have also called America the planet’s biggest bully.

Gillum’s response has been to brag about sneaking food to the Defenders when they occupied the capital of Florida. Gillum is also a big fan of genuinely radical billionaire George Soros. Watch this:

GILLUM: Well I’ll tell you, I’m obviously deeply appreciative of Mr. Soros as well as Mr. Steyer, both men whom I’ve known for some time.

CARLSON: Well he’s not shy about it anyway, and although it has nothing directly to do with running the state of Florida, Gilliam thinks that Trump is a racist — racist! — who must be impeached.

GILLUM: This president is wrong for Florida on almost every issue, and as governor I will fight against each and every one of his wrongheaded racist and sexist policies. Donald Trump should be impeached now.

CARLSON: Racist! That guy could be running the state of Florida — not a small thing, not a small state.