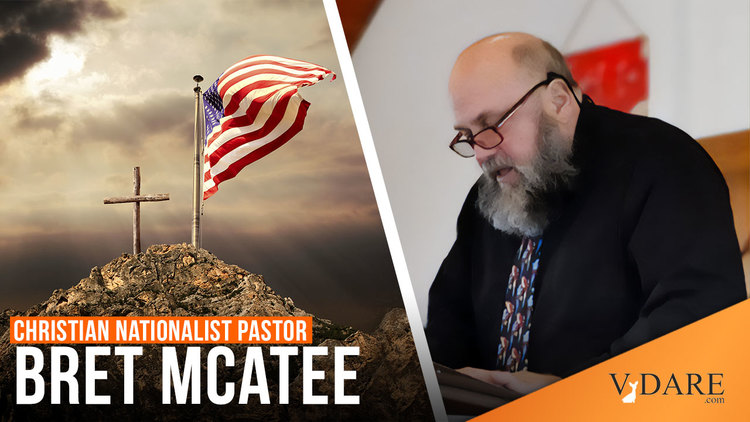 Then They Came For “Christian Nationalism”—Pastor Bret McAtee vs. America’s Hostile Elite

“Christian Nationalism” has emerged as the latest bogeyperson, not only for the leftist Corporate Media but also for secular and even cuckChristian elites, since the “Jericho March” in December [Trump-Supporting ‘Jericho March’ Ends In Protest, Burning Of BLM Banners, by Jillian Cheney, Religion Unplugged, December 14, 2020] and the January 6 Mostly Peaceful Protest at the U.S. Capitol. The charges against the budding movement are familiar: It’s racist, nativist, white supremacist, and insurrectionist. In other words, it’s a sign that, despite explicit orders from our Hostile Elite, the Historic American Nation might wish to survive.

Indicative of the micro intensity of this Cultural Marxist jihad (and also its lack of major targets): a recent Corporate Media attack, ammo supplied as so often by the $PLC vigilantes, on Pastor Bret McAtee of Christ the King Reformed Church, a small congregation in rural central Michigan (and a friend of mine). A scribe for the local MSM propaganda sheet actually called local police to see if they had heard anything about him—she called the cops on a Christian priest (they said hadn’t). [SPLC designates Charlotte church as white nationalist hate group, by Christian Martinez, Lansing State Journal, February 4, 2021].

This is part of a more general assault. Thus Thomas Edsall [Tweet him] of the New York Times, citing Andrew L. Whitehead and Samuel L. Perry’s book Taking America Back for God: Christian Nationalism in the United States, ominously warned that “It’s impossible to understand the Jan. 6 assault on the Capitol without addressing the movement that has come to be known as Christian nationalism” [‘The Capitol Insurrection Was as Christian Nationalist as It Gets,’ January 28, 2021]. Edsall quotes the authors’ claim that Christian Nationalism

…includes assumptions of nativism, white supremacy, patriarchy and heteronormativity, along with divine sanction for authoritarian control and militarism. It is as ethnic and political as it is religious. Understood in this light, Christian nationalism contends that America has been and should always be distinctively “Christian” from top to bottom—in its self-identity, interpretations of its own history, sacred symbols, cherished values and public policies—and it aims to keep it this way.

And this is the template. Rather than produce a robust biblical or theological analysis, these academics misconstrue and caricature Christian Nationalism, defining it as outside the parameters of historic orthodoxy. Celebrity pastors, seeking accommodation with elites, accept Politically Correct definitions and label other views as heresy.

Similarly, hotshot author Tim Keller [Tweet him], famous for his book The Reason for God, reviewed Taking America Back For God for the quarterly Life in the Gospel. “We must recognize that Christian Nationalism in its most pure form is indeed idolatrous,” Keller somberly intoned. “It looks to political power as the thing that will truly save us” [A Book Review on the Topic of Christian Nationalism, Quarter 1]. Those who oppose the movement, Keller warned, must be prepared to be labeled Marxist or Communist. “Christian Nationalism, to the degree it is influential, means the death of Christian witness,” he averred:

The ethos of Christian Nationalism is to not in any way try to persuade, win, or evangelize their opponents. Their attitude toward unbelievers is: “They are evil—what does their opinion matter? Sure they hate you—just hate them right back. Own the libs.”

Of course, this is exactly what Keller, and Whitehead and Perry, seek to do.

Not to be left out is Treason Lobbyist and Soros evangelical Russell Moore, former head of the Southern Baptist Convention’s Ethics and Religious Liberty Commission. Moore said nothing, as VDARE.com’s Allan Wall has observed, about the jailing of Canadian Christian pastors who opposed the nutty Flu Manchu mandate that closed churches. But he denounces Christian nationalism as a derivative of the Nazis’ Blut und Boden:

“Blood and soil” = the idolatry of the flesh fueled by the dark spirit of the age. The wrath of God is revealed from heaven against such.

"Blood and soil" = the idolatry of the flesh fueled by the dark spirit of the age. The wrath of God is revealed from heaven against such.

And in February, 100 housebroken evangelicals signed an open letter “condemning the role of ‘radicalized Christian nationalism’ in feeding the political extremism that led to the violent insurrection at the U.S. Capitol on Jan. 6 by supporters of former President Donald Trump” [Evangelical Leaders Condemn ‘Radicalized Christian Nationalism,’ by Sarah McCammon, NPR February 24, 2021].

The heresy having been defined, who will conduct the inquisition to smash the heretics and enforce the new orthodoxy? Why, the $PLC, of course! Its definition of hate is elastic enough to encompass not only the Westboro Baptist Church and Aryan Brotherhood, but also the blatantly bland: the Alliance Defending Freedom, the Family Research Council, the Ruth Institute, D. James Kennedy Ministries (DJKM).

Even better, it includes Christians such as McAtee, one of the leaders of a disparate, scattered guerilla band of Christian Nationalists in the hinterland resisting assimilation into a new multicult Tower of Babel. These holdouts—who refuse to bend the knee to Baal, even if they are culturally and politically powerless—must be publicly shamed and ritually humiliated. And, of course, personally, financially, and professionally ruined.

So the $PLC fingered McAtee as a “white nationalist,” and gave him a spot on its “hate map” (which also includes immigration patriots like VDARE.com, along with Beltway herbivores like the Center for Immigration Studies [CIS] and the Federation for American Immigration Reform [FAIR]).

This is what Michigan MSM media reported about McAtee:

As per Regime Media practice, there were no links, thus depriving readers of broader context to build an indictment that McAtee’s words did not support.

Now, recall what Mark Potok, formerly of SPLC said about its definition of hate group:

Our criteria for a “hate group,” first of all, have nothing to do with criminality, or violence, or any kind of guess we’re making about “this group could be dangerous.” It’s strictly ideological. So we look at a group and we say, ‘Does this group, in its platform statements, or the speeches of its leader or leaders. … Does this group say that a whole group of people, by virtue of their group characteristics, is somehow less?”

Potok told another reporter for the State Journal that the Hate Group label is “not meant to suggest even implicitly that the groups are engaged in violence or criminality.” But she called another pastor to get him to denounce McAtee. And she contacted public school superintendent Nady Stewart, who said that parents hadn’t complained about McAtee or his church, but that she was worried because schools were “embarking on a long-term journey towards an anti-racism initiative” [A Charlotte church has been identified as a hate group. Here's what you need to know, by Rachel Greco, February 11, 2021].

Thus, the $PLC’s defamation had the intended effect: It caused local media to start a smear campaign and stampeded local officials.

As Potok said in Michigan in 2007: “Sometimes the press will describe us as monitoring hate groups, I want to say plainly that our aim in life is to destroy these groups, completely destroy them" [Mark Potok Speech 1, YouTube, September 11, 2007].

But many of McAtee’s challenges to the orthodoxies of our era were standard conservative critiques until quite recently. Echoing the warnings of Sam Francis about anarcho-tyranny, McAtee believes “diversity” is a weapon designed to produce statism.

And he has unapologetically argued that nationalism is natural, taught in scripture, and affirmed historically by the church. “God still deals with people as being members of nations, peoples, and races,” wrote McAtee [Golden Oldie … Nationalism & Christianity, Iron Ink, February 18, 2021]. “This is a very unsavory truth for the modern Evangelical with their love affair for the erasure of all the creation distinctions. God has not given up on nations any more than He has given up on families from where nations arise.”

And here we get to the heart of the matter. As documented in the recent book  Who Is My Neighbor?: An Anthology In Natural Relations, for 2,000 years, Christians have taught that national, ethnic, and language groups are not arbitrary human creations or social constructs, but divinely created entities that reflect the purposes and glory of God.

Nations arise organically as extensions of families. In the Old Testament, nations are the descendants of a particular ancestor [Genesis 10]. Nations have a collective identity and a shared ancestry, along with a shared worldview that is the product of a common language, religion, and customs.

In other words, God created tribes, races, nations and races with an affinity for their own. A deep affection for one’s kinsmen is natural and good, indeed an outgrowth of the commandment to honor our fathers and mothers. Nationalism is simply the self-conscious awareness that seeks to develop and improve the nation.

Scripture likewise teaches that nations point us to God himself.

He made from one man every nation of mankind to live on all the face of the earth, having determined allotted periods and the boundaries of their dwelling place, that they should seek God, and perhaps feel their way toward him and find him.

Christ Himself assumed the goodness of unique nations in commanding his apostles: “Go therefore and make disciples of all nations” [Matt. 28:19-20].

Nor is this view of nationalism unique to one sect or denomination; Protestants and Catholics have taught that nationalism is a biblical aspect of personal piety.

The Bible, Presbyterian Charles Hodge wrote, “approves of parental and filial affection, and, as is plain from this and other passages, of peculiar love for the people of our own race and country” [Charles Hodge on Race, by Thorin Reynolds, Faith & Heritage, February 11, 2014].

And here is St. Thomas Aquinas:

“Nations,” said Aleksandr Solzhenitsyn in his Nobel Prize speech, “are the wealth of humanity, its generalized personalities. The least among them has its own special colors, and harbors within itself a special aspect of God’s design.”

Christian Nationalism is not “nativist” or “white supremacist.” These ancient biblical principles apply to all nations and races—red and yellow, black and white.

The gospel of Jesus Christ is not an affront to this natural order. And it does not seek to overthrow it.

Kevin Sullivan [email him] writes from the Wolverine State.