Early on Thursday, January 23, a group of hundreds of Central Americans crossed the Suchiate river on the border between Guatemala and Mexico. But Mexican immigration officials and the National Guard were waiting for them.  Using tear gas, the Mexicans dispersed the crowd, captured the migrants and put an end to the invasion [Guardia Nacional frena intento de migrantes de avanzar a Tapachula (“National Guard Stops Attempt of Migrants to Advance to Tapachula”), Milenio, January 23, 2020]. See also Mexican guardsmen break up migrant caravan along highway, by Peter Orsi, Associated Press, January 23, 2020; and the Milenio photo gallery here. It’s the new normal on Mexico’s southern border, thanks to Trump. And it seems to be working.

Below are two videos of the new Guardia Nacional, with shields and tear gas, shutting down the invasion.

A similar incident days earlier saw a caravan of some 3,000 migrants or so on the Guatemalan side of the border, intending to enter Mexico and go on through to the United States [Mexican troops block US-bound caravan travelers, AFP, January 18, 2019]. The caravanners were offered the chance to apply for work permits … in Mexico. Some 1,087 agreed and entered the country in Chiapas and Tabasco, but with no guarantee a permit would be granted [Más de mil migrantes ingresaron este fin de semana a México (“More than a thousand Migrants entered Mexico this weekend”), Excelsior (from Notimex), January 19, 2020]. Mexican Foreign Minister Ebrard  said that 2,400 had accepted the offer [Más de 2 mil migrantes ya están adscritos a opciones que ofrece México: Ebrard (“More than 2,000 migrants are already assigned to options offered by Mexico: Ebrard”), by Carolina Rivera, Milenio, January 21, 2020].

But plenty didn’t want the offer. They wanted to go to the United States. On January 20, that group, apparently tired of waiting in Guatemala, crossed the Suchiate and hurled sticks and stones at Mexican security forces, who responded with tear gas.

(Funny thing, when the U.S. Border Patrol hit attacking “migrants” with tear gas at the border in San Diego about this time last year, the Mexican Foreign Ministry protested. Which just goes to show what a difference a year and a tariff threat can make!)

You can see Honduran flags below:

This news from Mexico’s border with Guatemala, along with the latest data from U.S. Customs and Border Protection, shows what presidential determination can do…eventually. Customs and Border Protection has reported a 72 percent drop in apprehensions from May through December at our Southwest frontier with Mexico. Apprehensions dropped by more than 100,000, from 144,116 in May to 40,620 in December, three full months into fiscal 2020 [Southwest Border Migration FY 2020 CBP.gov]. 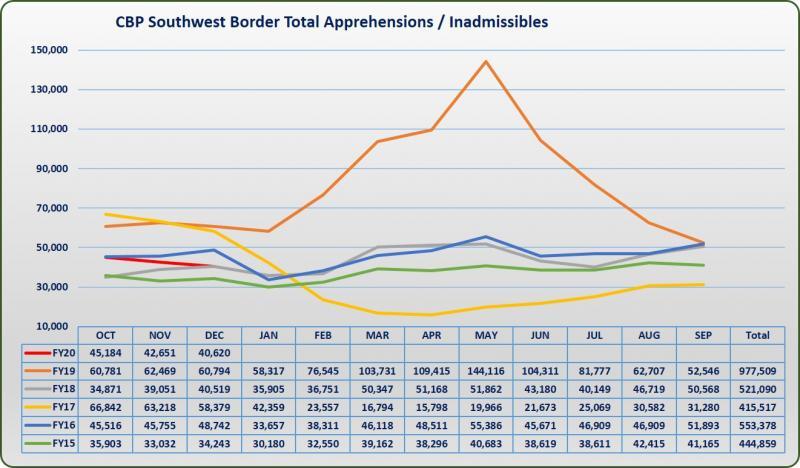 That’s real progress, and it’s basically due to President Trump’s threat to hit Mexico with tariffs if it didn’t stop the Central American mass migration. It supports VDARE.com’s longtime position that a President who sends the right message with a tough border policy, not least a major change in asylum procedures in this case, can stop the “migrants” before they start trudging north.

But give credit where credit is due. Mexico’s get-tough border policy, on display this month, is critical.

AMLO: [T]o apply the law without violating human rights, that is what we accomplished even yesterday…[we] offer refuge, and although it seems contradictory, protection. Because if we don’t take care of them, if we don’t know who they are, if we don’t have a registry, they go on and arrive to the north, criminal gangs trap them and attack them … they disappear. … Why the National Guard? Because we need our laws to be respected, as they do in all countries, without violating human rights and also with protection.

Later that morning, Foreign Minister Marcelo Ebrard noted that the National Guard did not harm anyone:

Foreign Minister Ebrard concluded that there is no expectation in the law to suspend migratory regulations for a group and even less so when they attempt to enter by force.

The INM (Mexican immigration bureaucracy) reported that today the assisted returned of some members of the migrant caravan, of Honduras, who entered the country in an undocumented matter in the past few days, began … at 8:43 a.m. an aircraft of the National Guard departed [from an airport in Tabasco state] with the destination of San Pedro Sula, Honduras, with 110 persons from Honduras on board … this aerial return will be the first of various planned flights.

Some Mexican politicians were none too happy to hear this:

“[T]he photos are very graphic … really what I saw was a hunt and that is what the agenda is now with all of Central America, that in Mexico we are being very rude with the migrants,” declared Senator Samuel Garcia of the Movimiento Ciudadano party.

Porfirio Munoz Ledo, president of the Chamber of Deputies, a prominent politician for decades and a member of AMLO’s MORENA party, tweeted similar sentiments.

“The savage aggression committed by the National Guard against Honduran refugees and the apprehension of more than 400 is a violation of Article 11 of the Constitution and of the international treaties we have signed,” he wrote.

But what does Mexico’s hoi polloi think?

Munoz Ledo’s Twitter feed helpfully provides the answer, as do the comboxes at the articles describing the riverine skirmish.

Hey, didn’t 2012 GOP Presidential contender Herman Cain say something like that about the Rio Grande [Cain’s Plan For Securing The Border: Build The Great Wall Of China, Fill A Moat With Alligators, by Marie Diamond, ThinkProgress, June 8, 2011]?

Another combox offered this from a fellow named Juan Walker: “Don’t let them set foot in the Suchiate, there are already too many cases of rape in Mexico” [Migrantes intentan cruzar a México por el Río Suchiate (“Migrants try to cross into Mexico through the Suchiate River”), Milenio Digital, EFE, AFP, Milenio, January 20, 2020].

A certain U.S. presidential candidate was vilified for weeks over a similar remark!

The four-part takeaway from CBP’s figures and the scenes on the Suchiate is this: