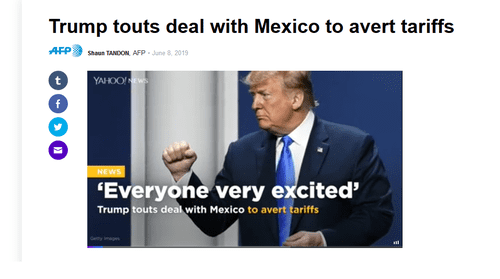 Trump Tariff Threat Called Off. Defeat or Victory? That Depends….

Well, the U.S. and Mexico made a deal and the tariffs have been called off. Did I not tell you about Mexican  Foreign Minister Marcelo Ebrard and team?  They are smart negotiators.   (See here).

Mexican Foreign Minister Ebrard tweeted (in Spanish) "I thank the Secretary of State for his valuable participation to achieve an agreement with the United States, gracias Mike !!"

So what did Mexico agree to? From AFP again:

Under the deal, Mexico agreed to expand its policy of taking back migrants from violence-riven Guatemala, Honduras and El Salvador as the United States processes their asylum claims. Mexico will also use its new National Guard nationwide to crack down on illegal migration, in particular along its southern border with Guatemala, a gateway for poor Central Americans hoping to reach the US. In turn, Mexico managed to avoid a proposal it had continually rejected -- that it process asylum claims on its own soil before migrants reach the United States.

So who won here?

Some Mexicans see it as a victory for Trump. In Marcelo's twitter feed I cited above you can see that.

The real question though is, will Mexico get control of the hordes travelling through its territory to get to the United States?

If it can, then this is a victory for both countries.

In the short term, Trump proved that he can make things happen. The Mexican government was genuinely moved to take quick action, they didn't want those tariffs. Now if they can just control their immigration, it could drastically reduce the amount of migrants arriving to our border. That would help greatly.

But I still need to see it to believe it. Mexico has been getting tougher, even before this tariff thing. And on June 5th, Mexico stopped a caravan on the Guatemalan border. That's good.

But Mexico has to keep it up, even after the publicity over the tariffs goes away. Mexico has to control its border. And now we have an agreement we can hold Mexico to if necessary.  If Mexico gets lax on controlling immigration, we need to put on some more pressure.

It should all depend on the numbers.  If within a reasonable amount of time the numbers haven't reduced, start talking tariffs again.

Besides, getting control of Mexico's border is good for Mexico also.

Of course, none of this eliminates the need for the Trump administration to get control of our border, and change these ridiculous policies we have including catch-and-release. Get with it!

In closing, I bet you're all wondering what Beto O'Rourke has to say about the tariff negotiations. Yes, Beto had a comment.

What we see is yet another example of him [Trump] trying to be both the arsonist who created this problem... and the firefighter who wants credit for addressing it.

Clever. But another way to put it is to say that Trump initiated this process and used it to get Mexico to agree to control its border. I'd say that's effective leadership on Trump's part.

Now we need to see that same type of leadership on our own border.

Failure to Control the Border
<< Previous
Next >>
LATEST