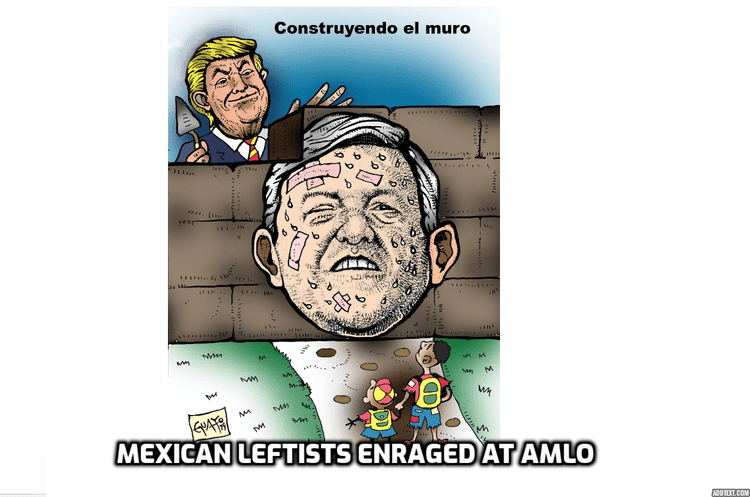 Mexican Pundit On The Tariff-Migrant Deal: Maybe Trump Was Right, Maybe We Will Pay For The Wall!

As I reported recently, President Trump called off his threat to hit Mexico with tariffs given the deal announced on June 7. Here’s the Cliff Notes synopsis: The U.S. won’t slap tariffs on Mexico, and Mexico will get control of the Central American hordes on their way to the United States.

Wrote Laura Rojas, a current congresswomen and former senator of the right-wing PAN, in Mexico City’s Excelsior [my translations throughout]:

On Friday, what we never imagined happened. Mexico not only will pay for Donald Trump’s wall, but Mexico will physically be the wall. … [T]he first [sic] Leftist government of Mexico accepted what no other president did: implement a very strict migratory policy dictated from Washington, contradicting its historic position and on top of that, has attempted to sell it as a great national victory. Shame on you, President Lopez Obrador.

That last line—shame on you—was in English, no less. And check out this cartoon, from a different newspaper,  Constructing the Wall, that portrays Trump’s building a wall bearing AMLO’s face. 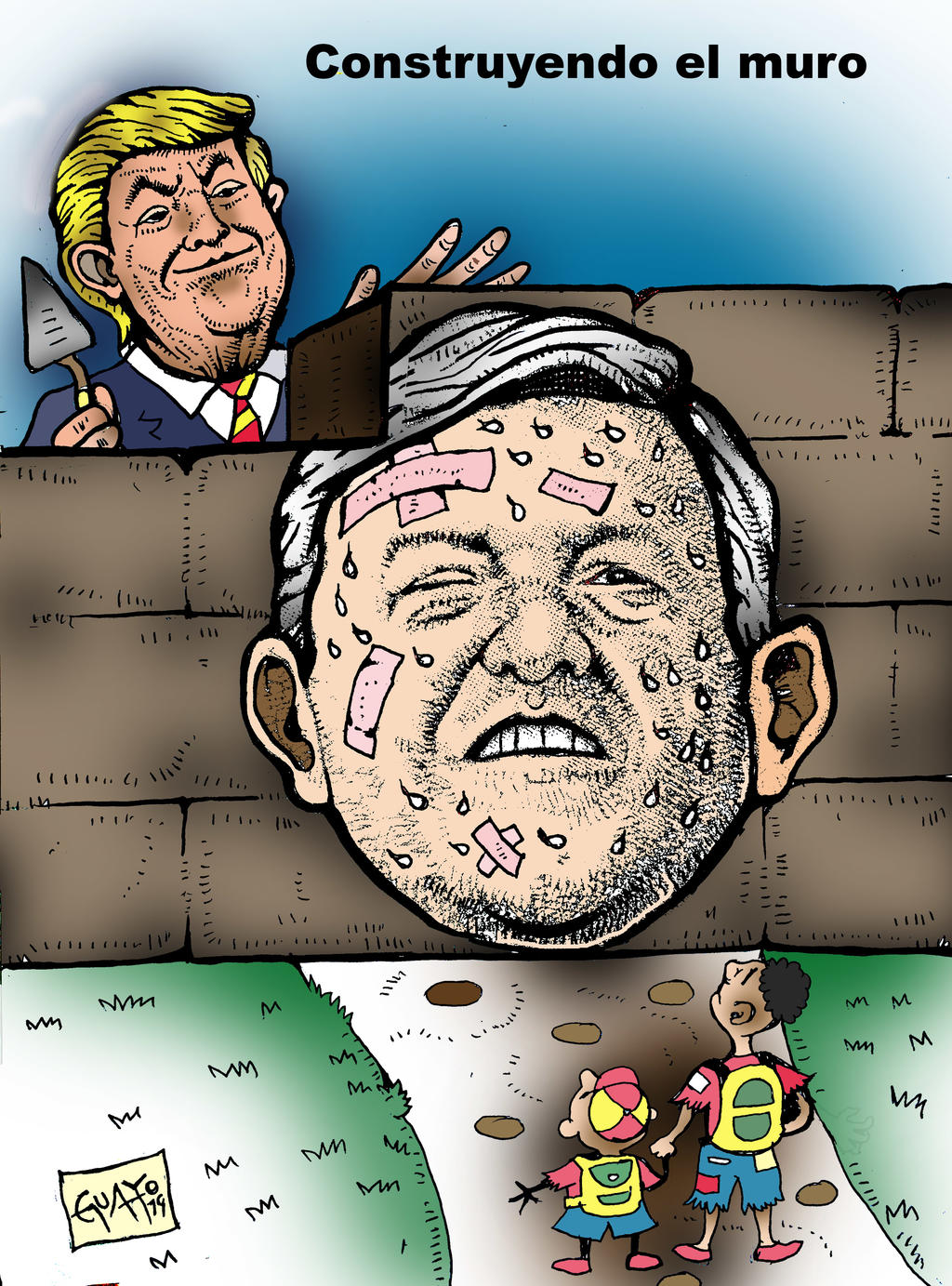 The day after the U.S.-Mexico agreement, AMLO himself appeared at a Mexican government rally in Tijuana. Remember, Tijuana was Ground Zero in the “caravan” movement of illegals to the border. That’s where they piled up to await entry into the U.S.

Various speakers delivered discourses. Last up was AMLO, who recounted the history of U.S.-Mexican relations and his big development plan he expects the U.S. to help finance. And he didn’t ignore the subject at hand.

Noting that an incredible 521,000 “migrants” (= illegals), a significant number of whom are children, have entered Mexico with the intention of settling in the U.S,, AMLO reiterated:

[W]e reaffirm our commitment to work to avoid the passage of migrants Mexican territory to reach the United States, but we would never violate the human rights of the travelers, beginning with the principal human right, the right to live free of misery, the right to life.

AMLO said he will “reinforce our [Mexico’s] borders,” but pledged Mexico’s assistance for the Central Americans who wait in Mexico  to have their asylum case adjudicatd in the United States:

Starting next week, we will be offering humanitarian help, job opportunities, education, health and well-being to those who await in Mexico their application of asylum to legally enter the United States.

Call it the Wait-in-Mexico plan.

AMLO also offered yet another friendly shout-out to President Trump, with whom he’d spoken by phone after the agreement was made:

[Y]esterday, politics triumphed over confrontation. And I should recognize that there was a willingness to seek a negotiated settlement to the conflict on the part of President Donald Trump and his principal associates…To President Trump, that’s why I do not lift up a clenched fist, but an open and frank hand.

A Couple Of Actions Mexico Took While Under Tariff Threat

When Mexico still faced the escalating tariffs it did take some steps to stop the illegal invaders. Whether it acted because of the threat is hard to say, but the timing was intriguing.

The state of Chihuahua lies across the border from Texas and New Mexico. On June 1-2, Mexican immigration authorities installed more checkpoints there. From Excelsior:

During the weekend, the Instituto Nacional de Migración (INAMI) installed checkpoints on various highways in the state of Chihuahua, which detained nearly 200 migrants.

Not bad for one weekend! Keep it up!

Next day, Excelsior reported that Mexico flew a group of Hondurans back home:

This Tuesday [June 4th], the National Institute of Migration repatriated 100 persons of Honduran origin who were residing in Mexico in an irregular manner. The transportation was made by air from Villahermosa, Tabasco to San Pedro Sula, Honduras, in accord with the Honduran government authorities, and in compliance with the current migratory norms and procedures.

Two things to note here. First, the report called the Hondurans “irregular,” which is code for illegal. Second, Tabasco is AMLO’s home state.

And check out this interesting tidbit: “This repatriated group was composed of families who were traveling with minors [emphasis added].”

Why can’t we Americans do that? You handle illegal-alien families by deporting them intact. That avoids “family separation,” and they can be together back in Honduras or wherever.

See, we really can learn from foreign countries. Diversity is strength!

Arson As A Form Of Protest

This story occurred before the tariff , but it shows just how dangerous some of  the illegals heading north can be:

[T]he foreign persons were found in the local branch office of the Instituto Nacional de Migración [Mexican immigration bureaucracy] in San Pedro Tapanatepec, Oaxaca [a state in southern Mexico], when they demanded from the guards their migratory regularization and permission to leave … when they didn’t receive a favorable response, they set fire to some sleeping mattresses, which caused a fire in the station.

[Vinculan a proceso a 4 extranjeros por incendio en estación migratoria (Four Foreigners Bound Over for Trial for Fire in Migratory Station), by Ernesto Mendez, Excelsior, May 20, 2019]

When will a U.S. border station go up in flames?

Morena Mayor Gets Busted In U.S. For Identity Fraud

AMLO has promised to end corruption in Mexico. Good luck  with that. A good place to start would be his own MORENA party. One of its mayors was recently sentenced to prison for using a fake U.S. passport.

A picture shows the very-white Aboyte during a Christmas parade a week before his untimely arrest on December 27 in Nogales, Arizona. Aboyte was only a mayor about three months. 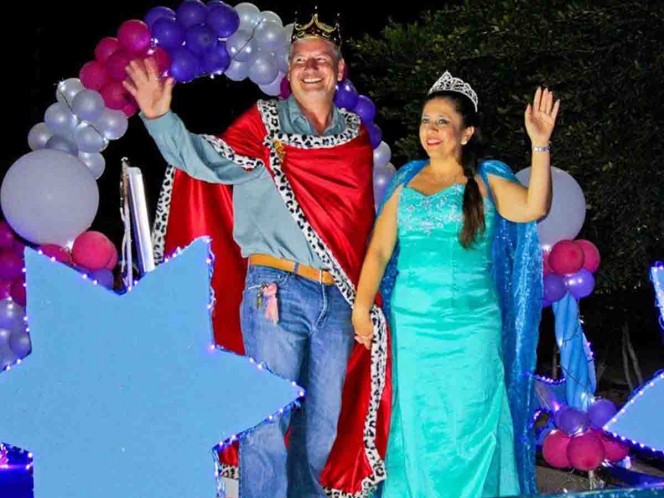 I guess he should have stayed home:

He attempted to cross with false documentation to take his family on a pleasure trip to Disneyland. Nevertheless, the social media section of the Bácum municipal government and his substitute [as mayor] claimed that Rogelio Aboyte requested permission to take care of a health problem.

In 2010, Excelsior reports, Aboyte was sentenced “to 70 months in prison for conspiracy to traffic 23 kilograms of cocaine in the state of Louisiana.”

To their credit, Sonora’s MORENA leaders said that the party  “would not defend any party activist or authority that has participated in illegal actions inside or outside the country.”

A “New Case Of Racism” In California, On Video

Spanish-language media love to highlight real-life videos of “racist incidents” in the United States that are often linguistic, not racial.

For example, Excelsior offered this recent confrontation at a Mexican restaurant in Anaheim, California:

A new case of racism was captured on camera in a restaurant in the United States. In the video, which has spread on social networks, a man can be seen lashing out and using racist insults against a female employee and some customers.

The American went to the restaurant for its cheap taco special. But the offer was valid only on Fridays, and it wasn’t Friday.

The confusion originated from a sign which announced the promotion of “Fish Tacos for $1.99” but in small letters in Spanish it specified that the offer was only on Fridays. [My emphasis].

So an American customer who doesn’t speak Spanish didn’t know it was a “limited-time offer,” as the sales pitch goes.

Of course, Excelsior called it “racism,” and tagged it accordingly.

But here’s the thing: I don’t hear any “racism” in the video. It’s a language dispute.

Yes. But maybe not for long.