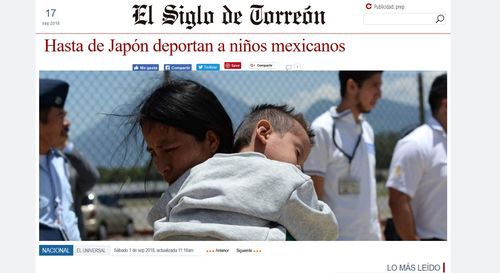 Mexican media have taken note: The United States is not the only country that deports Mexican minors and their parents. “Even Japan” deports them— along with several other countries.

The United States is not the only country that deports Mexicans. In Japan, Malaysia, Lebanon, Italy and Vietnam, there have been reported cases of fellow Mexicans, minors, who migrated to those countries and because they did not have their papers in order they were send back.

So why does the U.S. get most of the bad publicity for doing what other countries do?

And despite the expense and difficulty of traveling to Asia and Europe, a number of Mexicans somehow wind up in these faraway places, as illegals.

El Salvador, a country that is poorer than Mexico, was in second place with a not insignificant quantity of 86 Mexican minors deported. 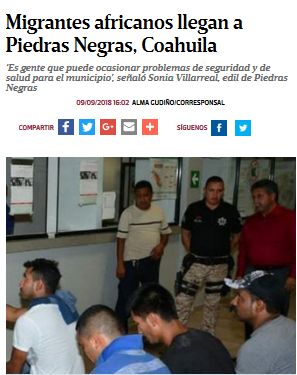 Mexico’s Excelsior has reported the arrival of Africans to Piedras Negras (which means “black stones”—a reference to its coal deposits).

You heard that right. Africans from Congo, Nigeria, Cameroon, and Angola are in Mexico, right across the Rio Grande from Eagle Pass, Texas.

The arrival of migrants from Central and South America, as well as from the African continent, has increased in the municipality of Piedras Negras, Coahuila, which does not have the necessary infrastructure to confront this crisis.

When illegal aliens arrive in the United States, they are a boon to the economy and society. Anyone who says otherwise is a racist. But when migrants arrive in this Mexican city, it’s a “crisis.”

Sonia Villarreal, mayor of the border city, emphasized the importance of attending to this problem jointly with the American CBP (Customs and Border Protection), where they are sent to shelters which are at their maximum capacity…”

She added that the objective of these persons is to seek political asylum in the United States… they keep arriving and they sleep in the open air, in public plazas, or under the bridge.

And, said the mayor, the migrants “are obviously bringing problems or who can cause security problems and health problems for the city.”

Wait a minute. A certain presidential candidate was mercilessly vilified and pilloried — and still is, when the Main Stream Media have nothing else to bellyache about — for rightly observing that illegal aliens bring problems to the U.S. Yet a Mexican mayor can say the same thing about illegals in her country!

The illegals in Piedras Negras, by the way, also come from Brazil, Argentina, Cuba, El Salvador, Nicaragua, Guatemala and Honduras.

Elizabeth Torres went to a church on Wednesday [August 29] clutching the document in which the government notified her that she can be expelled from the United States for having entered without permission.

Torres reports that on Tuesday morning [August 28] she was in her taco truck in the parking lot of Load Trail [a trailer manufacturer] when hundreds of immigration agents arrived at the trailer factory in Sumner, a rural zone northeast of Dallas. “There was a heap of them, a heap,” she said. In fact, according to ICE, there were nearly 300 agents who went to the business as part of a criminal investigation against the factory.

More than 150 persons were detained, according to preliminary reports.

Torres admitted “she attempted to get into the food truck, but the agents sent her and the relative with whom she works into the factory.”

“We don’t work for the company,” Torres observed, and apparently she isn’t here legally, either.

Nevertheless, for being in the wrong place at the wrong time, she joined dozens of families who went for legal advice at the evangelical church Filadelfia, in Paris [Texas].

This evangelical church is a support center for the families of the detained.

The majority of those who went to the improvised help center were women and children, wives and children of the employees who had been transported to detention centers and are still detained. According to the Mexican consulate in Dallas, at least 146 of the affected workers are Mexicans.

Two days after the raid, the consulate sent representatives to the church.

Univision’s purpose in this lachrymose tale, of course, is to show how harsh and harmful U.S. immigration policies are. So the propaganda outlet also focused on Juana Ruiz, a detainee’s wife. Obviously, her husband is illegal, and she probably is also. “I have four children who depend on my husband,” she sobbed. “The children are 14,10, 6, and 2 and they are Americans.” In other words, they're probably anchor babies.

Time to plug the anchor-baby loophole in our immigration law.

Yet even this three-Kleenex tear-jerker shows the situation is not as hard as they want you to think.

Detainees can be released if family members post bail. And as for the taco vendor, she might still be deported, but she is one of five women released for humanitarian reasons. Her daughter has a heart murmur and has surgery scheduled soon.

Guess who’s paying for that. 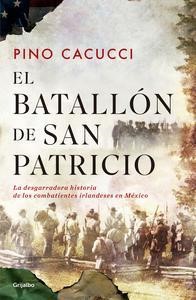 During the Mexican-American War (1846-1848), the St. Patrick’s Battalion, a unit of deserters from the U.S. Army, mostly Irish-born Catholics, fought for Mexico. The San Patricios are heroes in Ireland and Mexico, and in 1999 Tom Berenger starred in a movie about them.

Italian author Pino Cacucci recently published an historical novel about the San Patricios that bashes our treatment of immigrants. As reported by Excelsior:

A handful of Irishmen “without fatherland or uniform” elevated Mexican military history and confirmed the racist image that the neighbors of the north have constructed. “The Irish suffered pitiless and violent forms of racism upon their arrival to the United States, that continued, and was even worse, in the ranks of the Army. And speaking of immigrants, they treated them exactly as today they treat the Mexicans and the Central Americans,” says novelist and translator Pino Cacucci.

The novel’s subtitle refers to the San Patricios as “forgotten.”” On the contrary, Mexico remembers them quite well. Excelsior continues:

It is a sad episode which continues to be a source of indignation for Mexicans, the loss of half the national territory to the Yankees.

(Note to Neo-Confederates: When foreigners say “Yankees,” they mean all Americans).

More than a page from history, the story of the Saint Patrick’s Battalion, told by Cacucci, is a chronicle that speaks of human dignity, military abuse, racism and Anglo-Saxon disparagement.

Said Cacucci: “these are events that seem far away, but they continue being exemplary and very symbolic of the reality that we are living today.”

That’s how the Mexican War and the loss of Mexican territory are viewed in Mexico.

On that note, I invite the reader to read my  On Guadalupe Hidalgo Day, Here`s Why The U.S. Has Title To The Southwest.

Derbez now works in the United States, where he seems to be doing quite well, while complaining that there are too few Latinos in Hollywood.

His recent movie Overboard grossed $91.2 million worldwide against a $12 million budget. Along with Anna Faris, Derbez has  a leading role. He is also one of the producers. 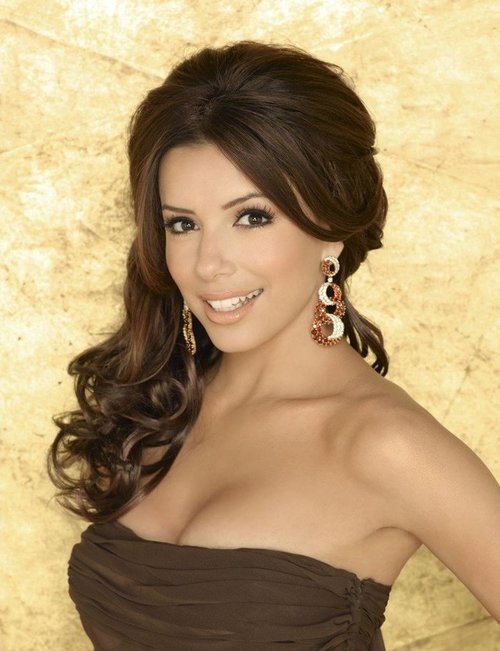 Eight other Mexican actors play major roles in the movie, and by Mexican, I mean actors from Mexico, not U.S.-born Latinos such as Eva Longoria (right) who also appears.

To give roles to Mexican actors—instead of actors of Latino origin who live in the United States and “are more gringo than anything else”—was a conscious decision and was not difficult, but thanks to that decision, what appeared onscreen was “authentic.”

Derbez has said he aspires to be the spokesman for Latinos in the U.S.  But here he’s saying that there need to be more Mexicans rather than U.S.-born Latinos, at least in some roles,  and that U.S.  Latinos
“are more gringo than anything else”.

Hmm. What will U.S.-born Latinos think of that?

But maybe it’s not so puzzling.  Maybe it depends on the audience.   Derbez said the “all Latinos” thing to Univision in the U.S. ["Quiero ser la voz de los latinos en este país": Eugenio Derbez, Univision Radio, May 4 2018] and said the Mexican thing at a press conference in Mexico.