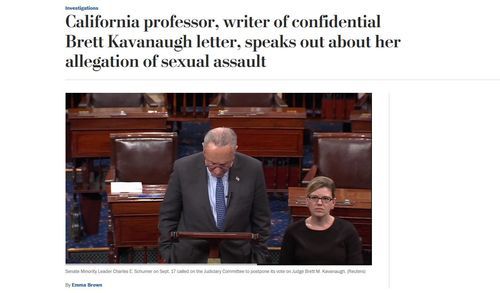 Upon the memory and truthfulness of Christine Blasey Ford hangs the Supreme Court nomination of Judge Brett Kavanaugh, his reputation, and possibly his career on the nation's second highest court.

And much more. If Kavanaugh is voted down or forced to withdraw, the Republican Party and conservative movement could lose their last best hope for recapturing the high court for constitutionalism.

No new nominee could be vetted and approved in six weeks. And the November election could bring in a Democratic Senate, an insuperable obstacle to the elevation of a new strict constructionist like Kavanaugh.

The stakes are thus historic and huge.

And what is Professor Ford's case against Judge Kavanaugh?

When she was 15 in the summer of '82, she went to a beer party with four boys in Montgomery County, Maryland, in a home where the parents were away.

She says she was dragged into a bedroom by Brett Kavanaugh, a 17-year-old at Georgetown Prep, who jumped her, groped her, tried to tear off her clothes and cupped her mouth with his hand to stop her screams.

Only when Kavanaugh's friend Mark Judge, laughing "maniacally," piled on and they all tumbled off the bed, did she escape and lock herself in a bathroom as the "stumbling drunks" went downstairs. She fled the house and told no one of the alleged rape attempt.

Not until 30 years later in 2012 did Ford, now a clinical psychologist in California, relate, in a couples therapy session with her husband, what happened. She says she named Kavanaugh as her assailant, but the therapist's notes of the session make no mention of Kavanaugh.

During the assault, says Ford, she was traumatized. "I thought he might inadvertently kill me."

She did not tell her parents, Ford says, as she did not want them to know she had been drinking. She did not tell any friend or family member of this traumatic event that has so adversely affected her life.

Said Kavanaugh in response, "I categorically and unequivocally deny this allegation. I did not do this back in high school or at any time."

Given the seriousness of the charges, Ford must be heard out. But she also needs to be cross-examined and have her story and character probed as Kavanaugh's has been by FBI investigators as an attorney for the Ken Starr impeachment investigation of Bill Clinton, a White House aide to George Bush, a U.S. appellate judge, and a Supreme Court nominee.

During the many investigations of Kavanaugh's background, nothing was unearthed to suggest something like this was in character.

Some 65 women who grew up in the Chevy Chase and Bethesda area and knew Kavanaugh in his high school days have come out and spoken highly of his treatment of girls and women.

Moreover, the way in which all of this arose, at five minutes to midnight in the long confirmation process, suggests that this is political hardball, if not dirt ball.

When Ford, a Democrat, sent a letter detailing her accusations against Kavanaugh to her California congresswoman, Anna Eshoo, Ford insisted that her name not be revealed as the accuser.

She seemingly sought to damage or destroy the judge's career behind a cloak of anonymity. Eshoo sent the letter on to Sen. Diane Feinstein, who held it for two months.

Thus, Ford's explosive charge, along with her name, did not surface until this weekend.

What is being done here stinks. It is a transparently late hit, a kill shot to assassinate a nominee who, before the weekend, was all but certain to be confirmed and whose elevation to the Supreme Court is a result of victories in free elections by President Trump and the Republican Party.

Palpable here is the desperation of the left to derail Kavanaugh, lest his elevation to the high court imperil their agenda and the social revolution that the Warren Court and its progeny have been able to impose upon the nation.

If Kavanaugh is elevated, the judicial dictatorship of decades past, going back to the salad days of Earl Warren, William Brennan, Hugo Black and "Wild Bill" Douglas, will have reached its end. A new era will have begun.

That is what is at stake.

The Republican Senate should continue with its calendar to confirm Kavanaugh before Oct. 1, while giving Ford some way to be heard, and then Kavanaugh the right to refute.

Then let the senators decide.