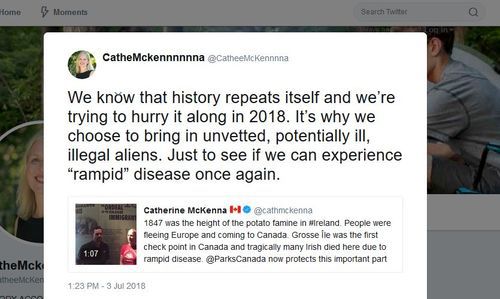 The Famine Irish And THE CAMP OF THE SAINTS

She's responding to a Tweet from the  genuine Catherine McKenna, Canada's Minister of Environment & Climate Change

Her point is that people have forgotten, in their sympathy for the Famine Irish, how bad it was for the receiving countries. It was a lot like the Camp of The Saints, and the cholera from the fever ships killed not only the emigrants, but a lot of both Canadiansd and Americans.

Modern-day immigrants from places with Ebola or whatever are unlikely, if they (a) don't kill us all, and (b) survive themselves, to assimilate to the American nation the way the Irish did.