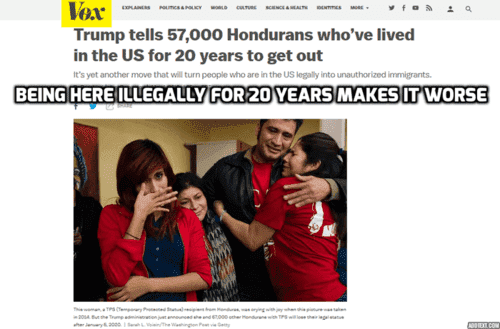 Finally, President Trump has ended the Temporary Protected Status of Hondurans in the United States, which began on Jan. 5, 1999 in response to Hurricane Mitch, which hit Honduras in 1998.  “Temporary” indeed!

Trump’s order affects 57,000 Hondurans, but note that they have 18 months, until Jan. 5, 2020, to leave .And that 57,000  doesn’t include  at least 53,500 anchor babies TPSers have begotten in the past two decades. All of them, because of our insane birthright citizenship policy, are American citizens.

Nor does it cover the rest of the 1.1 million Hondurans here. And that’s the minimum estimate.[Honduras regrets US move to end temporary protected status, by Freddy Cuevas, AP May 4, 2018]  I bet the figure is higher.

Note, too,  that the majority of riders in the recent caravan to our border were Hondurans.

Naturally, after the termination was announced, Hondurans and their allies expressed profound gratitude for our decades of hospitality and went about arrangement for their return home.

Just kidding! That would be Bizarro World. Here in the real world, the end of TPS is another of Trump’s incalculable injustices.

Why not this: “Wow, They Let These Hondurans Stay for Twenty Years, How Generous”?

And 18 months is some great hardship? I didn’t get 18 months to prepare when the National Guard called me up for Iraq!

Honduras joins countries such as El Salvador, Haiti and Nicaragua from which Trump has taken away this migratory status. They now have 18 months to regularize their status or leave the country. In all, more than 300,000 indocumentados (undocumented) will be left without status.

As if that’s a bad thing!

Of course, for Univision, it is a bad thing. But at least the network admits one unpleasant truth: If the Honduran can’t—or won’t—regularize their status, they’ll probably just stay here illegally. Then, more anchor babies!

Her Plan A is to stay in the United States until the last possible day. Her Plan B is to go to Spain, where she has family.

Why not Honduras? Because ...

To return to Honduras is not an option, she says, for its low salaries, the inequities and the violence in the country due to the gangs, their extortions and their scant respect for anybody’s life.

Honduras does have a high murder rate, about double Mexico’s, but it has been declining since 2012. One hopes that continues, but even if it doesn’t, the U.S. is not obliged to accept every Honduran who wants to come here. Shouldn’t they try to improve their own country?

One-sixth is a rather large chunk of the Honduran GDP.  In contrast, remittances to Mexico constitute only about 2.7 percent, so taxing them to build a wall would not destroy the Mexican economy.

Today we received the sad news of the suspension of TPS, a heavy blow to the Hondurans on U.S. soil and to all the Honduran people.

A minute later, this:

These 18 months will become an opportunity to keep fighting for the well-being of all Hondurans regardless of where they are. We will do what is necessary to achieve a permanent regularization of our fellow Hondurans currently benefitted by TPS.

So the Honduran government wants TPS Hondurans legalized in the United States. Watch for them meddling in our affairs to get it.

But the Honduran president’s complaint invites a question: If these Hondurans are so industrious—if they add so much to the American economy—why isn’t he begging them to return? Why aren’t the partisans of TPSers here urging them to return home and put that industry to some good by rebuilding their homelands?

Two minutes later President Hernandez had a message for Hondurans who might have to return home:

To the fellow Hondurans who do return, know that you are not alone. Honduras awaits you with open arms and we will be supporting you to accomplish a dignified and comprehensive reintegration to your country. The Honduran people never surrender!

Great! When do we start?

So much for Honduras.

For all the caterwauling we get about the anti-Mexican racism of immigration patriots, not least President Trump, something about the five candidates in Mexico’s presidential election on July 1 is a little curious, as I’ve noted in the past.

Their complexions are a little on the pale side. Shouldn’t a representative of the Mexican people, particularly those crossing our border, look at least a little like them?

Here are the candidates:

We watched their April 22 debate in our living room here in Oklahoma. my Dad watched for a bit, allthough he doesn’t understand Spanish. He too  commented on how white the candidates are were. (Click here for a photo of the five candidates at the debate and here for the three moderators.)

With Mexican meddlers, who needs Russians?

And AMLO complained about the Mexican presidential plane, saying it was better than Trump’s plane and that he had offered to sell it to Trump.

Mexican Actor On A Mission In Hollywood—Hire More Latinos! Eugenio Derbez is a famous Mexican actor, comic, screenwriter, director and producer, and also the nephew of former finance minister Ernesto Derbez, of whom I’ve written in the past.

Derbez has appeared in Spanish and English films, and is something of a phenom in Hollywood. With a star on the Walk of Fame, he’s Mexico’s most famous cinematic export. He was a presenter at this year’s Oscars, at which he told a lame joke about the wall that bombed even with that sympathetic audience. [The top 12 most political moments from the 2018 Oscars, Washington Examiner, March 5, 2018]

But don’t think  Derbez is just in it for himself. He’s toiling for a cause. The papers say so:

Eugenio Derbez, who is preparing to debut his new film in English, the comedy Overboard, thinks that if Hollywood really wants to invest in diversity in its projects, the change should begin “with the executives” of the studios. “Everything begins with the executives…”

Derbez referred to a recent study from the University of Southern California, which claimed that just 3.1 percent of the characters in 900 movies produced between 2007 to 2016 were Latino.

“That percentage is nothing, basically,” Derbez was quoted as saying. “In my case I have had to give work to myself. I make my own movies and productions, and I participate sometimes when others make me an offer, but really the opportunities for Latinos are very few, and much has to do with the executives.”

Derbez continued: “When there is no diversity above, there cannot be diversity below.”

And why does Hollywood reject proposals from Hispanics? Derbez explains:

When you propose an idea to the studio, all those who read it are Anglos and they don’t understand the concept, nor the story’s potential, nor who the actors are who work in Latin America….They don’t know the Spanish-speaking world, and thus, they don’t contract them [Latinos].”

The problem couldn’t just be mediocrity, could it?

That’s ambitious. He wasn’t born here, yet wants to become The Latino Spokesman. He has a “pan-Latino” perspective.

In other words, Derbez and the people he purports to represent, whether Mexican, Honduran, Salvadoran or anything else, have nothing in common with the Historic American Nation, and care nothing about it.

And for us Americans, that’s a problem.