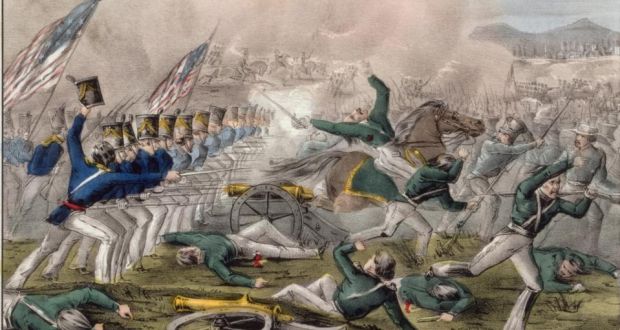 The Fulford File, By James Fulford | St. Patrick And San Patricio: Thoughts On Immigrants Then And Now

Tomorrow is St. Patrick's Day—this usually leads to a wave of sentimentality about the "immigrant experience." The Voice Of America has temporarily turned itself into the Voice of Kilkerry And Kildare with St. Patrick's Day Recalls Irish Immigrant Experience | 150,000 marchers expected at New York City parade [By Adam Phillips, March 16, 2011]

All the old myths come out:

"There was tremendous discrimination against them. Signs went up all over New York and Boston [that said] 'No Irish Need Apply.' And they were always lampooned regularly in the press as idiots, as garbage. And so they need to get together," says Brian O'Dwyer, [Email him] chairman of the non-profit Emerald Isle Immigration Center."

This, of course, is an urban legend. There were never any such signs. [See "No Irish Need Apply": A Myth of Victimization,  by Richard Jensen, Journal of Social History 36.2 (2002) 405-429]. Northern employers in the 19th century were as enthusiastic about cheap labor as their modern equivalents.

" 'We learned very quickly that the only way we could combat oppression is by being in and of ourselves, become part of the politics and making sure we took part in the American democracy,' says O'Dwyer. 'And that developed a whole brand new way of thinking by the Irish—as opposed to any other immigrant group before or since—that you needed to organize, that you needed to be part of the fabric of American society quickly so you could make your mark in America.'"

Well, yes. They needed to get jobs in the Civil Service, and make money out of government contracting.

The memoirs of 19th century Irish-American politician George Washington Plunkitt included chapters on Honest Graft and Dishonest Graft  and Reciprocity in Patronage. (Honest graft is where the man with the inside track gets the contract, but the bridge doesn't actually fall down). Richie Daley in Chicago is still at it.

What with one thing and another, they haven't always been a positive influence in politics. But they have pretty much all been immigration enthusiasts.

Brian O'Dwyer, for example, is a lawyer for the Teamsters Pension Fund, and other Big Labor Funds, and is, his website says, "one of the Top 100 Irish-American Lawyers in the United States".

But, apparently as a labor of love, he works for the Emerald Isle Immigration Center, which was set up in the 1980s specifically to aid modern Irish illegals. Let me repeat that—the New York Based Emerald Isle Immigration center was not set up to help Irish citizens who wanted to immigrate legally, it was set up to help Irish illegals.

But at least O'Dwyer is working for Irish illegals. Politicians like Teddy Kennedy and Tip O'Neill were for immigration from anywhere at all.

In the debate over the 1965 Immigration Act, O'Neill said to the House Of Representatives

"We have committed our nation to the preservation of freedom for all peoples of the world; not only those of Northern Europe."

John F. Kennedy was the author of A Nation Of Immigrants

(written at the suggestion of the Anti-Defamation League) and his kid brother Teddy was the floor manager of the 1965 Immigration Act. (He's the fellow who said "Out of deference to the critics, I want to comment on … what the bill will not do. First, our cities will not be flooded with a million immigrants annually. Under the proposed bill, the present level of immigration remains substantially the same … Secondly, the ethnic mix of this country will not be upset." This second promise was not only not kept, it is now considered politically impossible to suggest it should be.)

And while Irish-Americans have tended, in recent years, to be an assimilated and patriotic group, that wasn't always the case.

"But conflicts in identities and loyalties are common in the cauldrons of war.

"'Let none but Americans stand guard tonight' said Washington at Valley Forge. Irish Catholics deserted the Union army to fight beside Mexican Catholics in the San Patricio battalion against what they thought was American aggression. Honored today by Mexico, the San Patricios were hanged when captured by Winfield Scott's army."[Diversity Is Strength! It's Also...Major Hasan And The Unraveling Of America, November 09, 2009]

That was during the Mexican War in the 1840s. The San Patricio battalion was mentioned in a LatinoVoice posting Why Mexicans Celebrate St. Patrick's Day, (undated, but on today's front page) where Jim Estrada writes

"St. Patrick's Day has special significance in Mexico and among generations of families who can trace their history to the old Southwest, particularly among those of Mexican heritage. This reverence is due to the actions of unsung heroes known as the San Patricios.

"While their bravery and military skills are not particularly well-chronicled outside of Mexico and the Southwest, their hero status among Mexicans almost makes up for the for the absence of their role in the Mexican American War (1846-1848). They remain fondly remembered and admired as Los Colorados — the redheaded Irishmen who fought in support of the Mexican forces."

The San Patricios were Irishmen who had come to the United States, joined the Army voluntarily, and deserted to the enemy, taking up arms against the Army to which they had sworn an oath.

After talking about their heroics for a while, and how the Mexican and Irish governments honor them as martyrs, Jim Estrada ends with

"On this St. Patrick's Day (and future ones as well) don't forget to the toast to the San Patricios, who understood the plight of immigrants and chose to stand with them in battle and death.

The part about standing with immigrants is just stupid, although it shows why Estrada is hyped about this story—the San Patricios were immigrants to America, but the people they were "standing" with were Mexican nativists.  It was the Americans, being an invading army, who were acting like immigrants.

Now, Jim Estrada is presumably an American citizen, judging by his name, and so are the people he speaks of as "families who can trace their history to the old Southwest, particularly among those of Mexican heritage."

But apparently neither Jim Estrada, nor these families who celebrate the memory of the turncoat battalion that fought for Mexico, is loyal to the actual United States of America.

If, ten years ago, you had asked me to name two immigrant groups that had definitely assimilated and become loyal to the United States, I would have mentioned the Irish and New Mexicans like Linda Chavez, both of whom have been American since before the Civil War.

I would apparently have been wrong twice. And that's not a cheerful St. Patrick's Day thought.