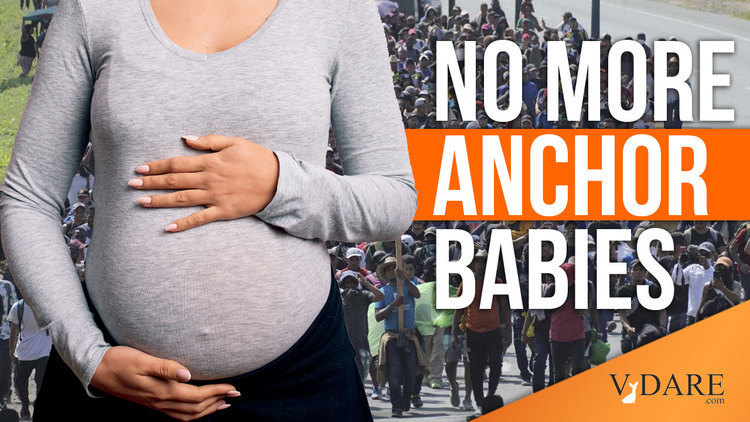 Imagine what would happen if Americans could vote up or down on the Fourteenth Amendment. Hypothetical choices:

My guess: choice B would pass overwhelmingly—perhaps by as much as 75%.

And wouldn't that be wonderful? Anchor babies, whose families often depend on welfare to get through the day, would no longer burden us.

Foreigners like the Koreans who traipse over to the U.S. on a lark to give birth for the sole purpose of getting an American birth certificate and U.S. passport for their children would be out of luck.

What a pity—they would miss out on those oh so handy U.S. I.D.s!

Volumes have been written on the accident whereby American citizenship is bestowed on anyone born here—even if their parents are here illegally. I refer you to the analysis of my VDARE.COM friends and colleagues: Nathaniel Parker and Robert Locke, Michelle Malkin, Allan Wall, and Ed Rubenstein.

And VDARE.com's sponsor, The Center for American Unity raised this citizen child issue with the Supreme Court last year.  The Center filed an amicus brief challenging the assumption that an enemy combatant Saudi citizen is a U.S. citizen solely because he was born in the United States—to a temporary worker.  The Court ultimately avoided the issue, but CAU's brief, which is now a permanent part of the Supreme Court records, was a classic example by which Justices—and their clerks—can be educated prior to reinterpreting the law.

Now birthright citizenship is back on center stage—thanks to the recent essay in the Journal of Physicians and Surgeons by Dr. Madeleine Pelner Cosman entitled Illegal Aliens and American Medicine.

And as we renew our thinking on the abuse of the 14th Amendment, we need to focus on one of the major oversights in earlier reporting.

Historically, the most frequently quoted number of anchor babies born each year is 200,000.

But the 200,000 figure is woefully understated.

When I asked Cosman how she arrived at her higher number, she explained that the 1992 U.S. Census indicated 200,000 anchor babies—with 96,000 born in California alone.

Since illegal immigration has increased significantly in the last decade, Cosman told me that she adjusted the calculations by 50% to be roughly consistent with the increased alien population.

But based on what I see every day in the San Joaquin Valley—and what I see when I travel around the country— even 350,000 anchor babies per year is low— preposterously low.

Just look around you. Wherever you live, you are likely to see young, fecund Mexican women, walking children in strollers and possibly pregnant, in every corner of town.

When I asked Cosman if she agreed with me that the anchor baby numbers might be even higher than her essay indicated, she cited three major reasons why I am probably right:

"First, some anchor babies are born in facilities that actively encourage [anchor babies] but report the births only to those organizations that will provide long-term assistance to Hispanics by providing welfare benefits. This list would include pro-illegal alien 'rights' groups like the Mexican American Legal Defense and Education Foundation and the American Immigration Lawyers Association.

Second, because of the privacy and confidentiality stipulations of the Health Insurance Portability and Accountability Act of 1996 and with additional privacy regulations in 2003 and 2004, medical facilities and physicians withhold all information on 'immigration status' as being confidential to the patient. This obviously creates the potential for significantly higher numbers of anchor babies than anyone would previously have guessed.

Third, sanctuary cities like California's San Diego, Los Angeles and Stockton as well as Austin, TX and New York have laws that prevent physicians, nurses, or police officers from reporting aliens to immigration or local law enforcement. Hospitals and obstetric suites in those cities have significant numbers of anchor babies born. But they are not reported as such."

"Logic demands that whenever free goods are offered freely, people take and take again.  To refuse free goods requires an act of will and an ethical determination not to take the unearned. If America offers incentives to illegal aliens to take citizenship, the illegal aliens are acting with intelligent self-interest in accepting our absurd generosity. After all, to refuse what is freely offered is impolite and insulting. Therefore illegal aliens who take the birthright citizenship are simply polite guests willingly accepting the offered hospitality of their American hosts."

Taking into account Cosman's four-point analysis and my view from California's front line, I have pegged the numbers of anchor babies born in the U.S. each year at 500,000.

I asked Cosman if she thought 500,000 might be in the ballpark. She replied:

"You may still be underestimating the problem."

Boil it down to the simplest logic. If you believe—as I do—that there are 20 million illegal aliens in the U.S., then how could there not be a minimum of 500,000 anchor babies born annually?

The late John Attarian, another friend and colleague, best expressed what aliens and alien births add up to: "We are drowning in immigrants."

Anchor babies are equivalent to, in football parlance, piling on. Not only do we get the illegal aliens, we also get their impossible-to-deport American citizen babies.

And when those babies turn 18, they can sponsor their illegal alien parents.

This gaping hole in America's immigration defenses has been obvious for a long time. Amazingly, the House task force on illegal immigration set up by Newt Gingrich when he was Speaker ten years ago called for a constitutional amendment ending automatic citizenship for children of illegal aliens—among other proposals that Gingrich called "specific, common-sense, practical recommendations."

Ask Gingrich about this when he appears in your town promoting his new I-want-to-be President book.

But H.R. 698 is languishing with only eighteen measly cosponsors.

Short of a proper interpretation of the 14th Amendment, or a constitutional amendment, the simplest way to end the absurdity of anchor babies is to cut the problem off at the source.

Pressure is mounting on all levels of government to enforce immigration laws.

Once those laws are obeyed, that will be the last you'll hear about anchor babies.