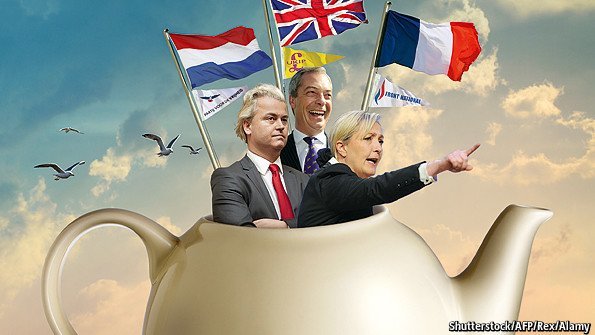 John Derbyshire: The ECONOMIST Calls Europeans To Their Duty: Vote For Immigration! Enrich The Global Elite! A specter is haunting Europe: the specter of Pierre Poujade.

Before he was a specter, Monsieur Poujade was a live human being, a citizen of France. He departed this vale of tears in August 2003, aged 82, leaving behind his specter and an abstract noun: Poujadism.

Actually, that’s not quite right. It makes Poujadism sound too narrow. The movement M. Poujade led in mid-1950s France was more broadly populist: patriotic, culturally conservative, hostile to taxation, high finance, and to what Poujade called “the vampire state.” It was a movement of the countryside and small towns, contemptuous of metropolitan elites.

It was some other things, too, being of its time and place. It was, for example, both anti-communist and anti-American. Poujadists also supported France’s colonial rule in Africa and the Caribbean. (French Indo-China was lost while the Poujadist movement was still organizing itself, to the degree it ever did organize itself.)

There was arguably a strain of anti-Semitism too, reinforced by the fact of Pierre Mendès-France, who was Prime Minister during Poujadism’s brief moment of glory (1954-55), being Jewish.

The main appeal of Poujadism, though, was to middle- and lower-middle-class citizens who wanted to live in an orderly state with its culture, traditions, and demography intact, under not too much government.

Poujadism soon succumbed to the usual third party ailments, listed by The Economist in its 2003 obituary of M. Poujade as “bickering, indiscipline and lack of experience.” (Though The Economist tagged these ailments as afflicting “many extremist parties,” without telling us in what aspect the Poujadists were extreme.)

Charles de Gaulle stole the Poujadists’ nationalist clothes, while deftly extricating France from Algeria. Other Poujadist positions were woven into the fabric of Gaullism as practiced by later conservative French leaders like George Pompidou and Jacques Chirac.

The main legacy of Poujadism today: it attracted Jean-Marie Le Pen into politics. Le Pen was elected to parliament in 1956, at age 28, on the Poujadist ticket. In 1972 he founded his own party, the National Front (FN). In 2011 he yielded leadership of the FN to his daughter, Marine Le Pen.

This brings us to the present day, and back to The Economist, whose current (January 4th) issue has a cover illustration (see above) showing Mlle. Le Pen sailing the seas in a huge teapot, along with fellow Poujadists Geert Wilders of Holland and Nigel Farage of Britain. Cover caption: EUROPE’S TEA PARTIES.

There are common threads linking the European insurgents and the Tea Party. They are angry people, harking back to simpler times. They worry about immigration. They spring from the squeezed middle—people who feel that the elite at the top and the scroungers at the bottom are prospering at the expense of ordinary working people. And they believe the centre of power—Washington or Brussels—is bulging with bureaucrats hatching schemes to run people’s lives.  [Europe’s Tea Parties, The Economist, January 4th.]

The Economist has long been a favorite target of mine and of VDARE.com (see here and here). It is, very self-consciously, the place to go to find out what’s on the minds of globalist elites. What’s very much on their minds right now are the elections to the European Parliament to be held at the end of May.

The general expectation is that Poujadist parties will do well. The Economist certainly thinks so:

Anti-EU populists of the left and right could take between 16 percent and 25 percent of the parliament’s seats, up from 12 percent today. Many of those votes will go to established parties of the Eurosceptic left. But those of the right and far right might take about 9 percent. And it is they, not the parties of the left, who are scaring the mainstream. [Turning Right, The Economist, January 4, 2014.]

If The Economist writers themselves are scared, it doesn’t show. The overall tone of their coverage is, as usual, smug, with a dash of condescension (“angry people, harking back to simpler times”).

There is some justification for that. Practically nobody in the EU thinks of Europe as their country. National elections absorb most political passion: the five-yearly European Parliament elections are seen as an opportunity to vent. Turnout is low—43 percent in 2009, down from 45 percent five years before.

Victories for the Poujadist parties in May will therefore be spun as protest votes, without relevance to national policy-making.

The elites, as represented by The Economist, none the less worry that national governments will be spooked by a big Poujadist vote into making concessions on trade and immigration.

The model here is Britain, where UKIP’s healthy poll numbers have given heart to patriots and Euroskeptics in the mainstream Conservative Party, even though UKIP has no seats in the House of Commons. (They do hold ten of the European parliament’s 751 seats.)

The Economist assures us that the Poujadist parties are not consequential in themselves—those good old third party ailments will doom them, as they doomed M. Poujade’s original legions:

National elections are less susceptible to protest votes than European elections are… As they get closer to power almost all Europe’s Tea Parties are likely to reveal themselves as incompetent and factional.

However, the danger of the Poujadists is in the influence they might have on nervous national politicians:

Yet the insurgents do not need victory to set the agenda or to put up barriers to reforms. That is why Europeans need to see them off.

The consequences of failing to do so will be dire:

Increasing inequality and growing immigration are the corollary of technological progress and economic freedoms that most people would not willingly give up.

Who is this “most people” of whom The Economist speaks?

Could it be the global elite that The Economist ostentatiously tries to represent—and that immigration is helping cause “increasing inequality” by diverting income to them?

Never mind about that!—The Economist instructs us. Let’s hear it for inequality! Show your support for growing immigration!