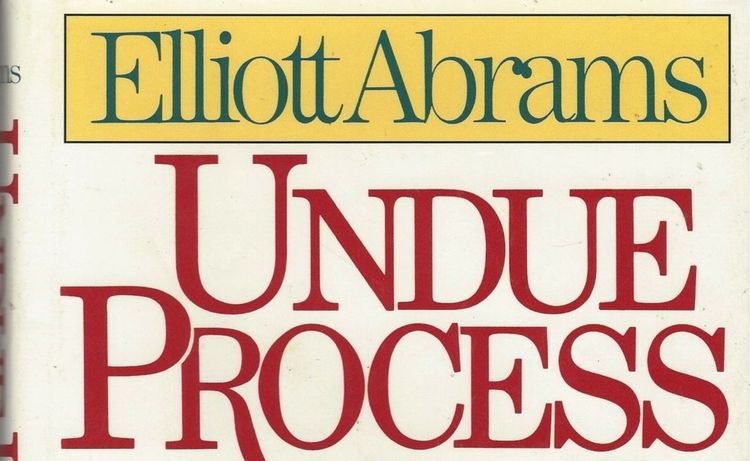 Cardiac Arrest—Undue Process: A Story of How Political Differences Are Turned into Crimes, By Elliott Abrams

Undue Process: A Story of How Political Differences Are Turned into Crimes, by Elliott Abrams (Free Press, 250 pp., $22.95)

DROP! Someone had thrown a ball at my chest . . . I sat up, shaken, startled awake .... A dream, probably. Or maybe just a small heart attack." 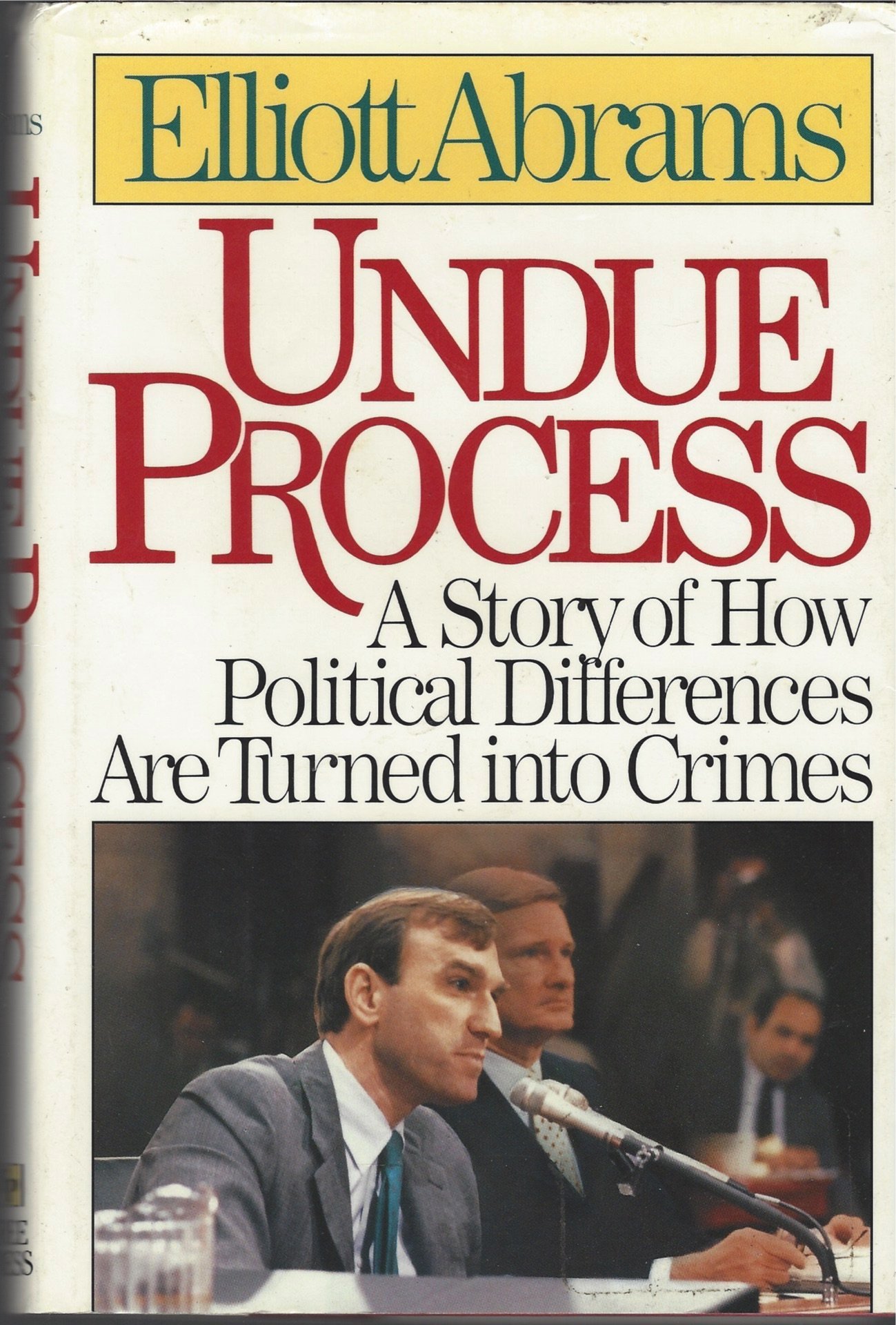 Elliott Abrams was only 43 last fall when he was rushed to the hospital from special prosecutor Lawrence Walsh's office in Walsh's official limousine. (Walsh was worried about his image. An earlier victim had attempted suicide.) The doctor said the symptoms seemed to be caused by "this pressure you are under." Abrams was indeed under pressure. He and his lawyers were negotiating the final details of what was to be a much-gloated-over guilty plea: to two charges that he had "withheld information'' about the Contra support network when testifying before Congress as a Reagan Administration official back in 1986.

Abrams passes over this incident relatively quickly in his clear and forceful journal of the few weeks in which Walsh suddenly reactivated his case after years of silence and in effect bastinadoed a settlement out of him. He is also perhaps more discreet than it appears at first sight about the impact of the ordeal on his wife and three small children, although their presence is constant in the narrative. He prefers discussing the legal and political implications. And these are indeed profound and disturbing.

Yet that poor fluttering heart cries out for attention. Like the forgotten moment in Spiro Agnew's very different memoir,  Go Quietly . . . or Else, when his wife, informed of his decision to accept a nolo plea, faints dead away, it is a reminder that democratic politics is not just a spectator sport. At times, it is literally more than flesh and blood can bear.

The distinguished moral philosophers who edit The New Republic, in the first of what will certainly be many savage notices Abrams will receive, have been harrumphing because his publisher's blurb draws a parallel with Darkness at Noon, Arthur Koestler's novel about how the Old Bolsheviks were induced to confess during Stalin's Purge Trials. But the analogy, which was scrupulously qualified, is eminently reasonable.

Like Stalin's prosecutor, Walsh was able to make headway with Abrams only when he stopped trying to prove that the Reagan Administration had really conspired to evade the vague and varying congressional restrictions on helping the Contras. (The pathetic truth was that the Administration had been so eager to please that Abrams even remembers an internal debate on whether wristwatches could be counted as "humanitarian aid," which at that point was permitted.) Instead, Walsh focused on a surreal logical point: Had Administration officials like Abrams in effect shaped their testimony to Congress to emphasize some things and downplay others?

Of course, Abrams had. Isn't that what politics is all about? It had never occurred to him that it was against the law. In fact, it's not against the law—if you are a member of Congress. The Speech and Debate Clause of the U.S. Constitution specifically grants the legislative branch absolute protection against such charges, even in the case of outright lies. This is because of the obvious danger that to do otherwise would lead to the criminalizing of political differences.

Executive-branch officials, of course, testify under oath. They are therefore subject to the strict standard of perjury as to facts. Balancing that, however, the executive branch controlled the Justice Department, from which any prosecution would normally come-until Watergate and the invention of special prosecutors.

Otherwise, nobody had previously questioned that executive-branch officials had the same sort of leeway in speech as the legislative branch. Nobody tried to prosecute Robert McNamara, for example, when he denied before Congress that the Kennedy Administration had agreed to remove Jupiter missiles from Turkey as part of the settlement of the 1962 Cuban Missile Crisis, although it had. Nobody had ever interpreted essentially hortatory legislation like the Contra restrictions with such extraordinary rigor. (To illustrate this double standard: nobody has ever been prosecuted under the 1798 Logan Act confining the conduct of foreign policy to the executive branch, although legislators on "fact-finding" junkets regularly pursue a competing diplomacy, never more so than in Central America.)

All these rules were abruptly changed for one simple reason: the advent of the modern era of repeated deadlocks between a conservative Republican White House and a liberal Democratic Congress.

And this is very similar to what happened to Koestler's Old Bolshevik. After a lifetime of Marxist dialectics, he was hypnotized by being confronted with an extreme but not illogical argument: that there was no objective difference, in a revolutionary crisis, between opposing Stalin's policies and actually conspiring against him. And he was not physically tortured. Just, well, pressured.

So Abrams was induced to plead guilty to these two heinous crimes: 1) He told Congress that no foreign government money was supporting the Contras. This was technically true. But he knew funds had been promised by the Sultan of Brunei, although they had not yet materialized. 2) In explaining to Congress that the Administration encouraged but had not organized the private network supporting the Contras, Abrams added—speaking extemporaneously—that "we don't have conversations" with it. Of course he knew Oliver North was, literally, talking to the organizers. But he just meant that nothing illegal was going on.

This was Walsh's famous victory. And he needed one badly after the rout of his prosecution of North. The court, significantly, treated it with complete contempt. Abrams was sentenced to just one hundred hours of community service, two years' probation, and the $50 minimum fine required by law. But in legal fees and in terms of his shattered career, the costs to him are crushing. The bitter truth is that he would have been far better off had he spent the 1980s on Wall Street with the rest of his Harvard Law School class, rather than serving his country and saving the world.

For Abrams will never be allowed to forget the fact that he pleaded guilty. Should he have fought, as his beautiful and ferocious wife memorably advocates throughout this book? He estimates it would have cost a million dollars, which he did not have. And a large piece of his life. John Poindexter fought Walsh for five years before charges were finally dismissed.

Like Koestler's Old Bolshevik, Abrams was hypnotized by the prosecution's logic, or more precisely by the undeniable possibility that a Washington, D.C., jury would be hypnotized by it. Furthermore, he notes grimly, who remembers now the fact that Reagan Labor Secretary Ray Donovan was ultimately exonerated?

There' is a villain in this book, only gently indicated: not the liberal witchhunt, unscrupulous and totalitarian though it was, but the Reagan Administration in its final, feeble stage. Maybe it looks good in retrospect. But it was the Reagan White House that panicked and triggered the special prosecutor mechanism, that abandoned loyal officials to it, that left the executive branch so embroiled in legal snares that only the wealthy, foolhardy, or cravenly compliant can now consider serving there. Above all, it was Reagan who could have saved these men by pardoning them on his last day in office. He did not, although it would have cost him nothing. In this, he failed as a political leader and as a man.

And this failure has exacted a terrible and possibly permanent price from the conservative movement. A curious absence from Abrams's book is the name of his formidable father-in-law, Norman Podhoretz, editor of Commentary and leader of the neoconservative ex-Democrats, although he was obviously intimately involved with the fami1y's torment and makes several anonymous but characteristically acerbic appearances. Yet this relationship explains something of the Democrats' fury against Abrams. And it also explains the immense pressure Podhoretz was under in exactly the weeks when his (hotly reciprocated) quarrel with Pat Buchanan reached its appalling climax, materially and perhaps fatally damaging the conservative movement's one chance to escape from the Bush catastrophe. —